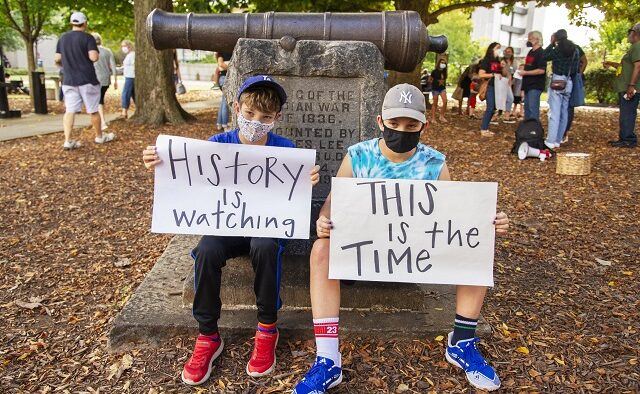 Siblings Ben and Adam Berardi hold signs in front of the ‘Indian War’ cannon during a rally held by Beacon Hill Black Alliance for Human Rights on Indigenous Peoples’ Day, Oct. 11, calling on DeKalb County Commissioners to remove the cannon from the Decatur Square. Photo by Dean Hesse.
Share

Decatur, GA — The DeKalb County Board of Commissioners, at its Oct. 12 meeting, unanimously approved a resolution to remove the controversial “Indian War” cannon from the Decatur Square. The cannon will be moved to an appropriate storage facility within 90 days.

“It’s clear that this relic cannon is a wayward orphaned cannon that has no clear ownership,” Terry said. “It’s in the public right of way, so the effort of this resolution is to remove it within 90 days and hopefully the rightful owners will come forward. I appreciate all of the residents, constituents, and the city of Decatur for prompting us to take action on this.”

The cannon is not publicly owned and is not a monument as defined by state law. It is unclear who currently owns the cannon. There is also no documentation that establishes that the relic cannon was dedicated to or accepted by DeKalb County, according to the resolution.

Members of the community have continued to encourage the commissioners to remove the cannon. At previous meetings, some residents suggested replacing the cannon with a memorial or artwork that commemorates Indigenous people and also educates the public.

Dozens gathered in Decatur on Monday, Oct. 11, which is Indigenous Peoples’ Day, to demand DeKalb County remove the cannon immediately.

Members of the Beacon Hill Black Alliance for Human Rights and the community marched from the cannon to the DeKalb County offices on Commerce Drive chanting “too many people died, no more symbols of genocide,” and “Indigenous and Africans on this land, symbols of hate cannot stand.”

During the protest, Winterhawk said that more Indigenous people don’t live in the area because the cannon sitting in downtown Decatur disturbs the peace.

“But we’re not disturbing your peace, we’re disturbing our own peace. We’d rather it be a welcome sign rather than a cannon that would take our heads off,” Winterhawk said.

The cannon doesn’t belong on the Square, he added.

“We’re tired of cannons being poked at us all the time,” Winterhawk told Decaturish. “There’s no reason for that cannon to be there. Even if one simple, little child said, ‘take this cannon away,’ these commissioners should listen to that and do that.”

Activists said the cannon’s placement was meant to send a message.

It starts with the county commissioners deciding to remove the cannon today and having it removed tonight, Patenaude added.

She and others advocated for the immediate removal of the cannon and were concerned about the resolution providing a timeframe of 90 days for the cannon to be removed.

“I want to see a crane out there. I want to get a truck out there [Tuesday] night,” Patenaude said. “One hundred and fifteen years is too long. We are done. We want it down now.”