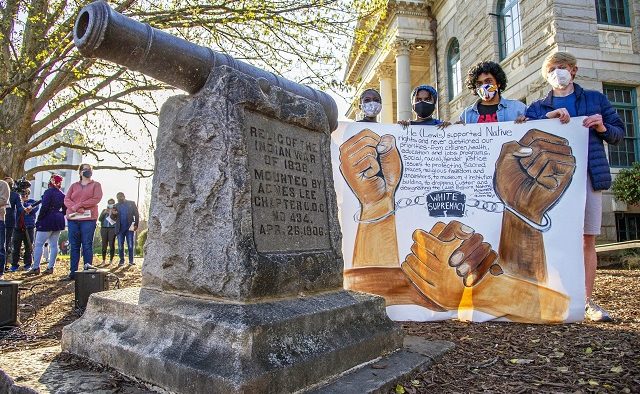 Decatur, GA — The “Indian War” cannon on the Decatur Square is set to be taken down around 7 p.m. tonight, Oct. 19. The removal comes after a vote on Oct. 12 by the DeKalb County Board of Commissioners to relocate the relic cannon.

“This victory proves that the earth beneath has more power than the cannon,” Muscogee elder John Winterhawk said in a press release.

“It’s clear that this relic cannon is a wayward orphaned cannon that has no clear ownership,” Terry said at the Oct. 12 meeting. “It’s in the public right of way, so the effort of this resolution is to remove it within 90 days and hopefully the rightful owners will come forward. I appreciate all of the residents, constituents, and the city of Decatur for prompting us to take action on this.”

“Tonight, we recognize the removal of a weapon of war that was used against the Muscogee Nation as part of a genocidal process to clear the land and make way for the plantation economy that followed,” a press release from the Beacon Hill Black Alliance for Human Rights states. “Both of these objects were placed by the United Daughters of the Confederacy in their attempt to promote a white supremacist narrative for generations to come.”

This will be the second time in about two years a symbol of white supremacy has been removed from the Decatur Square, as the Confederate obelisk was removed on the eve of Juneteenth in 2020, according to the press release.

Beacon Hill’s Decolonize Decatur Committee has led an organizing campaign to raise awareness in the community about the meaning of the relic cannon. Using a petition, webinars, a teach-in, public comment, presenting resolutions passed by both the city of Decatur and DeKalb County, and holding a protest on Indigenous Peoples’ Day, they built a grassroots movement.

“We understand that colonization is an ongoing process today, and we place the Indigenous – African connection at the heart of our work,” said Beacon Hill Black Alliance for Human Rights and Decolonize Decatur Committee co-chair Fonta High. “With this victory, we remain committed to doing the persistent and dedicated work to decolonize our local community in every aspect.”

Decaturish reporters will be on the scene as the cannon is removed. This story will be updated as more information becomes available.