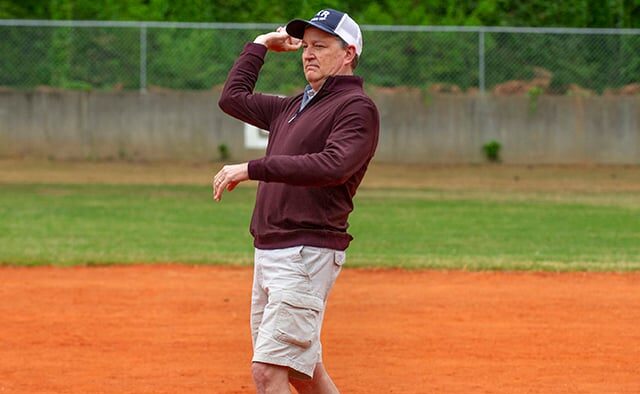 Mayor Frank Auman throws out the first pitch on Opening Day of the Tucker Baseball League at Fitzgerald Field on April 17, 2021. Photo by Dean Hesse.
Share

Tucker, GA — Tucker Mayor Frank Auman has been clear throughout his reelection campaign when it comes to the topic of the city adopting a nondiscrimination ordinance.

He believes that policing discrimination is not the city’s business and adopting the ordinance being proposed would create a legal quagmire for the city. Setting aside that nondiscrimination ordinances haven’t been a problem in any other city that has adopted one, Mayor Auman’s position can at least be viewed as a good faith argument against the ordinance, if not a particularly persuasive one.

His opposition to an NDO doesn’t mean he doesn’t care about discrimination, he recently said during a mayoral forum conducted by Decaturish.

“Don’t confuse the fact that I have concerns about implementing a law like this on this subject, with the fact that I’m empathetic to people who face illegal forms of discrimination, who are put upon by frankly some knuckleheads around,” Mayor Auman said. “I read about it all over the country, so there’s bound to be some of that happening in Tucker, so it’s not a matter of how I feel about it.”

Apparently, those conversations didn’t occur recently, because no one behind the NDO knew anything about Mayor Auman’s inclusivity resolution introduced at Tuesday’s City Council meeting.  Members of the public didn’t know about it either, because it wasn’t on the agenda published before the meeting.

Mayor Auman’s ally on the City Council, Anne Lerner, promised to create a “framework for a working group” to “further study an NDO,” which is a polite way of saying she’ll be kicking the can down the road so the mayor doesn’t have to get his foot dirty.

There is an election on Nov. 2, after all, and while Auman should be cruising to third term, he’s had to contend with a challenger, Robin Biro, who has made the NDO the centerpiece of his campaign.

That Mayor Auman introduced a resolution on the first day of early voting speaks to his level of concern about the upcoming mayoral race. Biro is openly gay and has numerous supporters in the community. His candidacy is a threat to Mayor Auman and his allies on the City Council.

The hard work of putting this nondiscrimination ordinance together predates Biro’s candidacy, however.

For two years, people have been pushing for this ordinance. Mayor Auman, and individual councilmembers, have refused to take it up. Now Pat Soltys and Matt Robbins, both of whom are ending their time on council, are joining Anne Lerner to create the so-called framework for the working group.

When the community in 2020 pushed for the council to finally act, Mayor Auman responded with a meandering speech about social justice and declared, “I’m a living example that it is possible to believe Black Lives Matter without supporting the organization of that goes by that name.”

At that same meeting in 2020 he introduced — and the council passed — a vague resolution that asked the U.S. Congress and the Georgia General Assembly to “enact, strengthen and clarify laws regarding crimes and civil acts, and to add substantial punishment in the form of imprisonment, monetary fines, probations, restitution or other means.”

Like the inclusivity resolution introduced on Tuesday, that’s a nice thought but is ultimately a meaningless gesture. NDO supporters wanted action. They received platitudes.

Little has changed in the year since that 2020 meeting.

Mayor Auman has for months successfully avoided taking any action on an NDO, in no small part due to the silent consent of his fellow councilmembers. Lerner and other council members who want to create this framework for a working group could’ve publicly pushed for the NDO back in 2020. They did not.

But two years and an election cycle later, the NDO suddenly has risen to the top of the city council’s priority list. Only, it’s not really a priority because the council didn’t do anything and there’s no guarantee that they will do anything.

If all the council did at Tuesday’s meeting was make a vague promise about studying an NDO for possible approval at some unspecified future date, it would’ve elicited an eyeroll or two, but would’ve been seen as par for the course.

But Mayor Auman took it a step further, putting forth another meaningless resolution that pays lip service to the concerns of NDO supporters without notifying those supporters about what he was doing.

It’s a slick political move by a slick political operator. Classic gaslighting. Mayor Auman has decried the injection of partisan politics into the city’s municipal race, but what he did on Tuesday is every bit as partisan and sophisticated as anything Biro could come up with.

The neat trick the mayor has pulled over the years has been convincing the Tucker residents he’s not as powerful as he is. If Mayor Auman wanted an NDO, the city would’ve had one by now. He doesn’t. Given his track record, that’s unlikely to change after Nov. 2.

The mayor’s earlier position that the NDO wasn’t necessary offended many, but it was a position that at least had the virtue of being consistent. You knew where the mayor stood on this.

But now he wants to be able to say he tried to do something, but his opposition was just being unreasonable. It’s clever. Give the mayor credit for that much.

It’s also a slap in the face to the numerous residents who have advocated for an NDO in the city of Tucker.