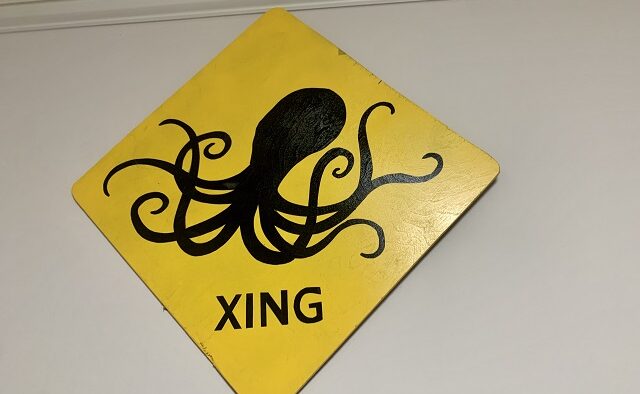 Though “Squid Game” isn’t entirely unique, the Netflix hit from Korea is different. It’s reminiscent of “Lord of the Flies,” “The Hunger Games,” and the Japanese movie “Battle Royale” (2000).  In these stories, children must fight to survive. We are fascinated by the loss of innocence and the descent into animalistic behavior. “Squid Game” twists this idea by showing us adults in a survival tale where they must win at childhood games to stay alive. Instead of fighting in the wild, this story happens within pristine walls. The players sleep in an oversized nursery. The arenas are neon playgrounds. The staircases leading to games create a vibrant and ominous labyrinth. The kid games are for adults, and losing means death.

Seong Gi-Hun (Lee Jung-Jae) is a divorced gambler whose mounting debts prevent him from caring for his 10-year-old daughter and his ailing mother. When a well-dressed professional offers Gi-Hun a chance to make money off a simple game, he jumps at the chance, even though the penalty is a series of humiliating slaps across his face. Gi-Hun then wants a chance at another high-stakes game with a much bigger reward. That night, he is taken to a secret location and the Squid Game.

Numbered 001 to 456, the players put on matching turquoise tracksuits. The faceless guards wear pink hooded jumpers, and their rank is denoted by a circle, square, or triangle mark on their masks. A voice explains that the players are all in debt, but will be treated equally to earn a chance at ₩45 billion ($40 million US). If you survive six days of six games, you win. Game one is a simple round of “Red Light, Green Light” and the arena is a playground. The difference between Squid Game and the version from your youth? Here, if you lose, you get shot. It gets bloody very quickly.

The show involves alliances between players. Gi-Hun has the last number 456 and takes pity on elderly, terminal ill Player 001 Oh Il-Nam (O Yeong-Su). He sees his friend Sang-Woo (Park Hae-Soo) who went to the top university, but is now wanted for financial crimes. Player 067 Sae-Byeok (Jung Ho-Yeon) has escaped North Korea and wants the money to save her brother. Player 199 Ali (Anupam Tripathi) is a young married father from Pakistan. The other characters include a gang of thugs, a crooked doctor, a shrill conniving woman, a religious fanatic, and a cop who sneaks onto the mysterious island in search of his lost brother. The players are terrorized by the merciless guards and the Frontman who controls the game.

Is it wrong in a game of survival to try to survive? What’s the right mix of selfishness, humanity, and compassion? What terrifies us? Not the shadows of a haunted house, but the bright colors of a giant Pee-Wee’s Playhouse and childhood games that kill.

I wanted to like “Squid Game.” I wanted to care about the characters. I couldn’t. I have enjoyed other survival stories better. Agatha Christie wrote a classic mystery in 1939. The novel now titled “And Then There Were None” features eight people who go to an island, and they die one by one. Troves of horror and monster movies follow the same trope. By the time we get to the end of the movie, there will be only one, and it is usually the main protagonist who we’ve been rooting for. When the story is done right, we care about the ensemble. In “Aliens” (1986), I cried when Vasquez (Jenette Goldstein) made the ultimate sacrifice. In “Predator” (1987), I clutched my heart when Dillon (Carl Weathers) goes down fighting. I felt very emotional watching a different Korean horror series, “Sweethome” (2020). Also found on Netflix, “Sweethome” includes over the top gore, but with a cast of characters I care about. In “Squid Game,” I felt little for the characters.

I am so far removed from a game of marbles that the chilling echo of stones doesn’t carry the weight it should. Death is so frequent in “Squid Games,” it loses its meaning. Blood splatters everywhere. We watch 455 deaths (actually more), but they feel meaningless. Everyone is going to die. This isn’t a spoiler. It is clear from the beginning that someone is a liar, someone will try to win at any cost, and someone’s death is supposed to pull at our heartstrings. The Frontman is our Darth Vader, seemingly moments away from whispering, “Luke, I am your father.” Ali is comparable to Rue in “The Hunger Games.” Gi-Hun is player 456, the Omega. The symbolism is predictable. The positive is that the symbols make the story easy to digest.

Even though I didn’t care for “Squid Game,” I wouldn’t call it bad. It is derivative of other dystopian allegories. Yes, it is gory. So much blood. At times, it is callous. At other times, it is tedious. The story unfolds with a painful slowness, but Netflix has a 1.5x speed option. I used it. The twists are obvious from a mile away. Still I tried to enjoy it. I worried less about the plot and let my eyes enjoy the playful approach to horror. Coffins appear as oversize gift boxes. The costumes should be easy to replicate for Halloween. I hope to see at least one triangle guard at the end of October. “Squid Game” may be light on terror and overflowing with blood, but it is colorful in its execution. I survived it. Grade C+.