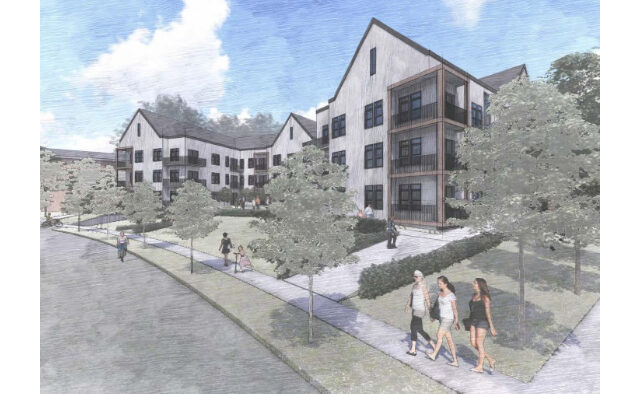 A design sketch of the apartment development proposed for East Lake Drive at Underwood Street. Image obtained via the city of Decatur.
Share

Decatur, GA — At its meeting Tuesday, the Decatur Planning Commission tabled an application to rezone property at 750 East Lake Drive in Oakhurst from RS-17 (Single-Family Residential)  to RM-43 (Multiple Family Residential) to allow construction of a 57-unit apartment complex.

The site is already home to a 17-unit multifamily complex built in 1964 and grandfathered in as an allowed nonconforming use when the area was rezoned to RS-17 in the 1970s.

“We know affordable housing is needed in Decatur. We think adding density with the new development offers affordable housing in a new building,” developer Cameron Grogan told commissioners. “This would be a state-of-the-art brand-new building that meets all of the modern codes, with underground parking, laundry facilities, everything you need.”

Although surrounded by single-family homes, the property’s current zoning allows for the construction of up to 22 townhouses on that lot that could be built without any rezoning or variances, Grogan added.

“But Braden Fellman Group [the property owner] is not a townhome developer,” Grogan said. “We looked at it, it would be profitable. But they are not interested in making a quick buck on 22 townhomes. They own real estate for the long-term all over Atlanta. They would rather build a multifamily development that they can keep for many years to come.”

Their proposal for 57 one-bedroom apartments, with parking underground, would cover less of the lot than 22 townhomes would and would provide more rental property in the city of Decatur and be more in character with the surrounding houses.

In keeping with Decatur’s inclusionary zoning ordinance, six of the 57 units would be reserved for renters making 80 percent of area median income (AMI) or less, he added, with the remaining 51 rented at market rate.

According to 2021 figures published by the U.S. Department of Housing and Urban Development, 80 percent of AMI for one person in the metro Atlanta area is $48,320, with a maximum affordable rent of $1,294 for a one-bedroom apartment.

During discussion, some members of the Planning Commission and some residents of the surrounding neighborhood expressed concerns that redevelopment of the complex would in fact reduce available affordable housing instead of producing more.

“The current two-bedroom units [would be] going down to one-bedroom units, when we know that the current two bedrooms are affordable now,” said Mercedes Caravello, who owns an adjoining property on East Lake Drive. “I think they currently rent for between $900 and a little over $1,000 depending on when you rented them. I’m concerned about my neighbors who live there now and whether they will be displaced or able to afford the new property.”

Losing 17 currently affordable units to gain a guaranteed six would be a net loss of 11 affordable apartments, Commission Chair Harold Buckley said. “And when you consider that it is going from two-bedroom [units] to one bedroom that is a loss of even more affordable beds. I can’t support that in the city of Decatur when we have been beating our heads against a wall trying to increase affordable housing.”

Ultimately, commissioners indicated during discussion that they wanted to see more details on the potential impact to the surrounding neighborhood, including a traffic study, as well as the inclusionary housing plan that is required by the city’s development ordinance, before they would be willing to recommend the rezoning.

“We don’t really have enough information to support a particular plat, at this point,” Commission Vice-Chair Mike Travis said. “And going to a RM-43 in the middle of a neighborhood regardless of whether we like or dislike a particular project, that sets a big precedent.”

Property owner Matthew Braden then requested that the application be tabled to allow he and his partners to gather the requested additional information and resubmit at a later date. The commission voted unanimously to table the application.

In other business, the commission also voted unanimously to recommend the adoption of several text amendments to Decatur’s Unified Development Ordinance that are designed to make it easier to construct accessory dwelling units (ADUs) and cottage court developments in the city.

One set of amendments would allow ADUs to be built on the site of single-family homes that are in RS-17 zoning districts as they are already allowed in the R-85, R-60 and R-50 districts. ADUs would not be allowed on the same lots as condominiums or townhomes, but there are still about 55 detached single-family homes that are in RS-17 districts, Threadgill said.

The text amendments related to cottage court developments increase the types of lots that are eligible to have cottage courts on them, as well as allow more but slightly smaller cottages to be built, she said.

The current code limits cottage court developments to only lots with minimum dimensions of 100 feet in width and 50 feet of depth, she said. But other housing types, like townhouses, only required a minimum 50 feet width. The amendment would allow cottage courts on the same dimensions of lots as townhomes.

In addition, the maximum square footage of each cottage would be reduced to 1,500 square feet from 1,800 square feet.

Finally, the department recommends removing the development maximum of nine and let the overall zoning category that the lot is in set the maximum number of units each site could contain.

Threadgill said, “Back in 2016, a developer approached the city with a lot that was surprisingly an exact 150 by 150 dimension. And they came forward to me with a preliminary plan with 12 units, and I said,’ I’m so sorry, but we max out at nine.’ They said, ‘Well, we cannot make this financially feasible.’ And this plan looked just like the picture [of cottage courts] in the UDO, with the court in the middle with the cottages around it, and it was a great corner property, but they could not do it.”

The commission’s recommendation will be forwarded to the Decatur City Commission which will consider the amendments for final approval at its next regular meeting on Oct. 18.