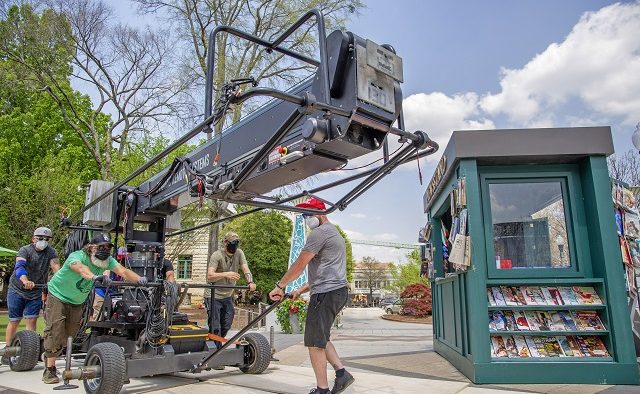 Scenes from the set of the DC Comics show ‘Naomi’ being filmed for the CW network in the Decatur Square on Wednesday, April 7, 2021. Photo by Dean Hesse.
Share

Atlanta, GA — Television and film crews frustrated by long hours and insufficient pay are planning a strike against the Alliance of Motion Picture and Television Producers starting Oct. 18, unless the two sides can come to an agreement.

If the agreement isn’t hashed out before then, the numerous TV and film productions in the Atlanta area will grind to a halt.

International Alliance of Theatrical Stage Employees President Matthew Loeb said the union will continue bargaining with the producers this week in the hopes of reaching an agreement that addresses core issues, such as reasonable rest periods, meal breaks, and a living wage for those on the bottom of the wage scale, according to a press release from IATSE.

“However, the pace of bargaining doesn’t reflect any sense of urgency,” Loeb said in the press release. “Without an end date, we could keep talking forever. Our members deserve to have their basic needs addressed now.”

The Atlanta Journal Constitution notes that not every film production would shut down.

“The union has separate agreements representing low-budget films, commercials and certain cable shows from networks such as HBO, Starz and Showtime, which will still be able to shoot,” the AJC reported.

But dozens of other productions could be affected from “The Walking Dead,” to “The Wonder Years” reboot, according to the AJC. To read the AJC story, click here.