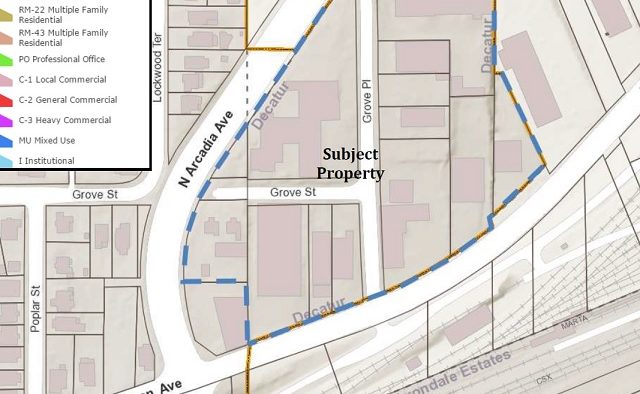 The opening day will be Nov. 3, according to Tomorrow’s News Today.

“The new store, which anchors the new Sam’s Crossing development, is located at 2720 East Ponce de Leon Avenue, officially in the City of Decatur, but at the edge of Avondale Estates,” Tomorrow’s News Today says. “The new store measures 53,875 square feet, a little bigger than the grocer’s current 48,387 square foot prototype stores.”

Toll Bros. Inc is working with Alliance Realty on the project. The developers are building about 290 apartments.

Decatur Planning and Economic Director Angela Threadgill previously told Decaturish in June that there have been no changes to the approved plans.

“At the time of the project approval, 289 dwelling units were proposed, with some flexibility to increase,” Threadgill said. “However, one of the conditions of approval by the City Commission was that of the actual units constructed, 65% would be one-bedroom units; 30% two-bed-room units and 5% percent three-bedroom units.”

Public art will also be added to the project, and the city plans to partner with the Decatur Arts Alliance to manage a public art program using funding from Alliance Realty.

“As part of the development agreement, Alliance Realty Services will be contributing $250,000 to the City of Decatur to further support the City’s efforts to expand public art on the development site, especially the portion along E. Ponce de Leon Avenue, one of the eastern gateways into the city,” Threadgill said.

The project has been discussed since at least 2018.

In a rare split vote in June 2018, the City Commission approved annexing the parcels and rezoning them to allow for the development. The project was rejected by DeKalb County before the developers approached the city about annexing the property into Decatur.

The City Commission’s vote came after the city’s Planning Commission had recommended denying the rezoning request from Alliance Realty Services for the 11 parcels on east Ponce de Leon Avenue and Grove Place.

Business owners near the proposed project objected to it prior to the annexation vote, saying the project encroaches on industrial uses in the area. In another strange occurrence, three county commissioners also objected to Decatur’s consideration of the annexation petition and rezoning request. The commissioners spoke out against it during public meetings.

Tomorrow’s News Today reports that several other Publix stores are in the works, including locations in East Cobb, Tucker, Dunwoody and Chamblee.

“Sources tell ToNeTo Atlanta that several store openings have been pushed due to shortages and delays in obtaining refrigeration units and other grocery store fixtures and equipment,” Tomorrow’s News Today reported.