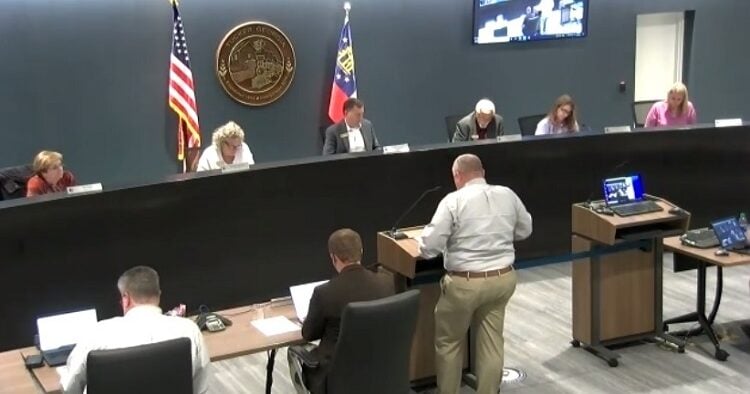 Auman stated that the purpose of the resolution is “to provide an inclusive, fair, and welcoming city.”

The resolution is a “statement of values” saying that all people are welcome to live, work and recreate in Tucker regardless of sex, sexual orientation, gender identity, race, color, age, state of ability or disability, national origin, religion or belief, marital status, family status, and veteran or military status.

It was added to the Oct. 12 meeting agenda by Mayor Auman, according to city spokesperson Matt Holmes.

“My understanding is, as often happens, this resolution was not ready last week by the time the agenda and packet had to be set,” Homes said. “Therefore, council voted tonight to add it to the agenda.”

Following the meeting, Councilmember Anne Lerner said the mayor asked her to work with council members Matt Robbins and Pat Soltys “to create a framework for a working group that can conduct further study.”

“The resolution is just the first step and we will continue to move forward on this issue,” Lerner said.

Here is video of the resolution being introduced at the Oct. 12 meeting:

The resolution the City Council approved is unlikely to satisfy residents who are pressing for the city to pass a non-discrimination ordinance.

A draft ordinance presented by Tucker Open Door in June 2020 was never officially taken up by the city council, and the question of support for the ordinance has become part of the discussion surrounding the upcoming municipal elections. While the resolution affirms that discrimination “will not be tolerated” in Tucker, it does not provide the legal recourse that a city ordinance might. Auman has said he has “serious reservations” about passing a nondiscrimination ordinance, while his opponent in the Nov. 2 election, Robin Biro, has made the ordinance one of the main issues of his campaign.

The resolution was passed unanimously.

“We want to make sure the city of Tucker is fair for everyone, without exception,” said Councilmember Pat Soltys.

Here is the resolution the City Council adopted: 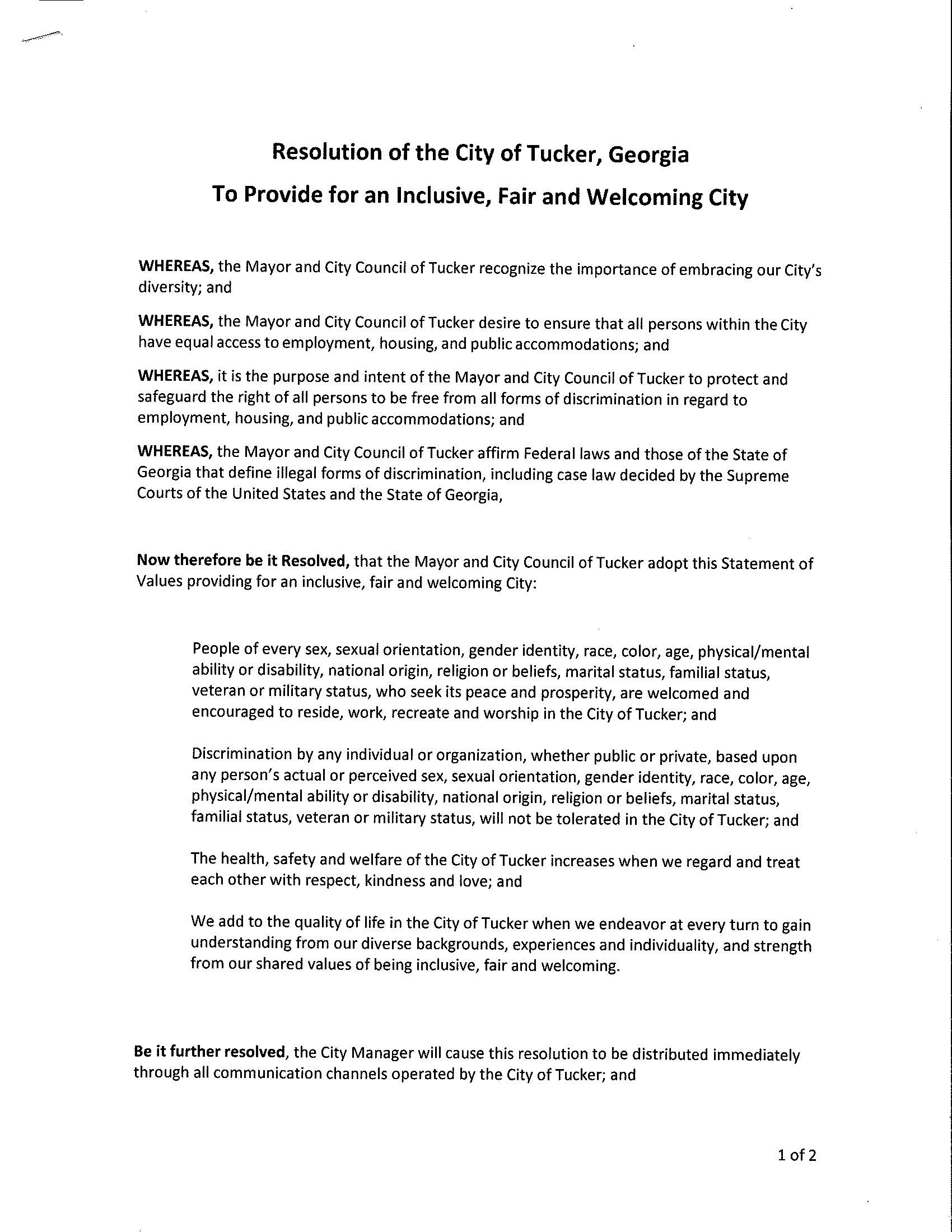 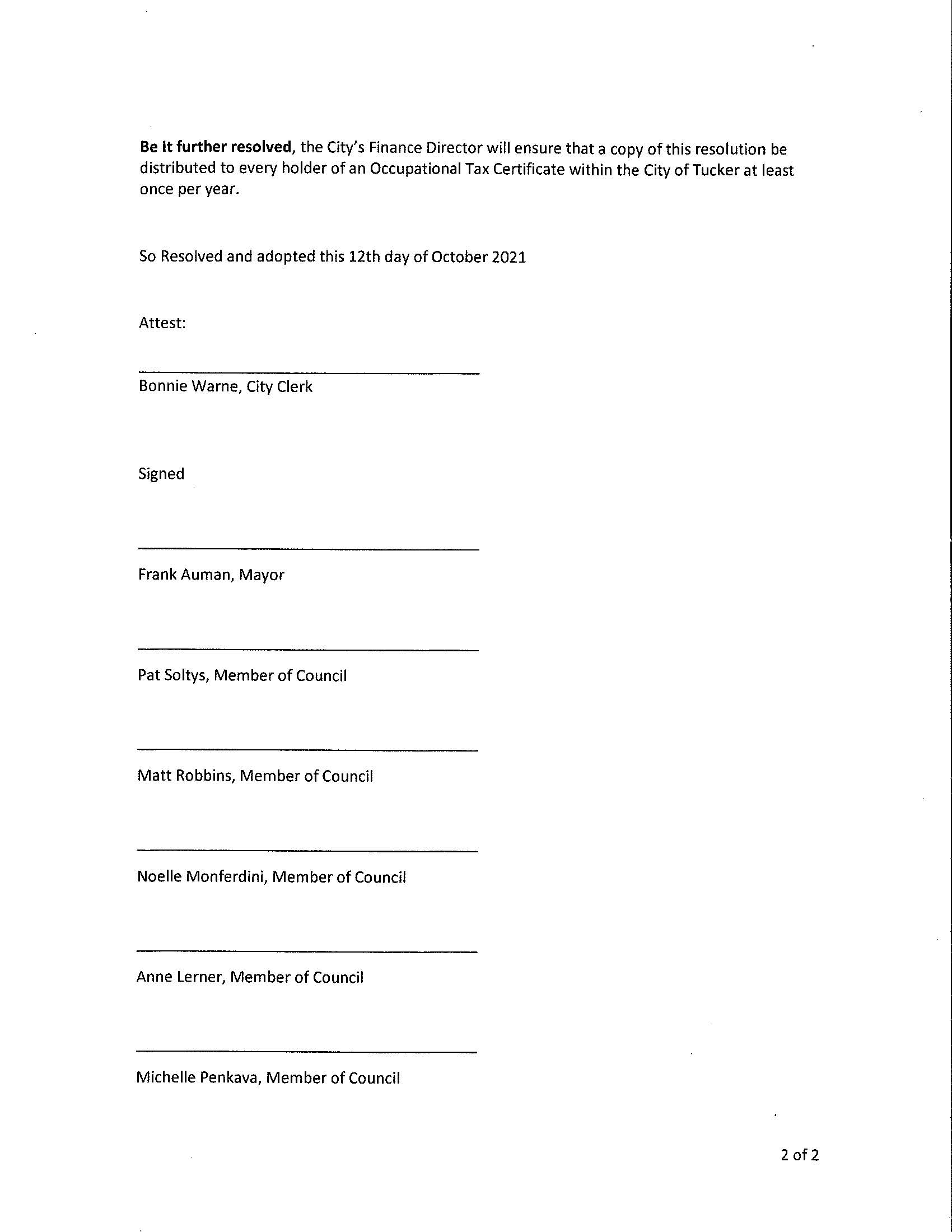 – Chick-fil-A is seeking a Special Land Use Permit with three variances for a new location. The fast food restaurant is currently located at the corner of Lawrenceville Highway and Hugh Howell, but is eyeing a relocation to Hugh Howell at the former site of The Greater Good BBQ.

Chick-fil-A is changing its model to a multi-lane drive thru at locations across metro Atlanta.

The single entrance and exit to the property would come from Rosser Terrace. Several residents expressed concern about increased traffic and possible safety concerns. Resident Lewis Wood said that the road was already being used for a cut-through and residents were not able to walk up and down the street for fear of traffic. Andy Wood said that an analysis indicated that it would bring an additional 1,500 cars per day to the street.

“That’s our biggest concern, having that much traffic dumped onto our residential street,” said Wood.

At the Sept. 16 Tucker Planning Commission meeting, city staff suggested denial of two variances because the proposed location of the drive thru lanes creates a potentially unsafe condition for pedestrians. Staff recommended 18 conditions for the application.

The second public hearing on this application will take place on Nov. 8.

– Courtney Smith, planning and zoning director, presented a first read on establishing a downtown entertainment district based on the Downtown Master Plan. Staff proposed to expand current outdoor dining standards, introduce the requirement of sidewalk café licenses for outdoor dining in the public right-of-way and create a downtown entertainment district that allows open containers of alcoholic beverages with some constraints.

Related to changes on Main Street, the text amendment includes a restriction on convenience stores in the downtown district and restriction on hookah bar regulations in downtown Tucker and Northlake districts. A second read of this text will come before City Council on Nov. 8.

– Council approved a SLUP request from Development Disability Ministry for a personal care home located in a 5-bedroom ranch house on .24 acres. DDM applied for a SLUP at 3710 S. Marlborough Drive. The SLUP would allow four people to live in a group home setting.

DDM CEO and Founder Ryan Whitmire said, “[Tucker is] a great city. It’s a welcoming city. It’s safe, affordable housing and it has a diverse population … We love it here.”

– The City Council voted to accept a contract to add sidewalks on Church Street and Tucker Industrial for $175,867. The addition will increase mobility for the senior community at Hearthside.

– A privately-owned portion of Richardson Road, near Stone Mill Way, is being dedicated to the city. A memo from city staff states, “The city has been working to resolve various issues in this community, including life safety, crime, and access issues. The dedication of this parcel, coupled with a future road improvement project, will help to further address these issues.”

Courtney Smith said, “If accepted, the next step would be to inventory the northern portion of the road so that we can evaluate the current conditions and proceed from there.”

– Parks and Recreation director Rip Robertson presented two items on parks. The city approved the construction of a new playground at Rosenfeld Park for $93,820. A memo from the city said there are no playgrounds or swings in the parks in the Smoke Rise community. The new playground will be ready by spring 2022.

Robertson said the city will apply for a $3 million grant to repair the Twin Brothers Lake dam at Johns Homestead Park. A pre-application for funding first goes to the Georgia Outdoor Stewardship Program. If the pre-application is recommended for funding by the Department of Natural Resources, Tucker will finance 25 percent of the total project cost and move forward with grant application.