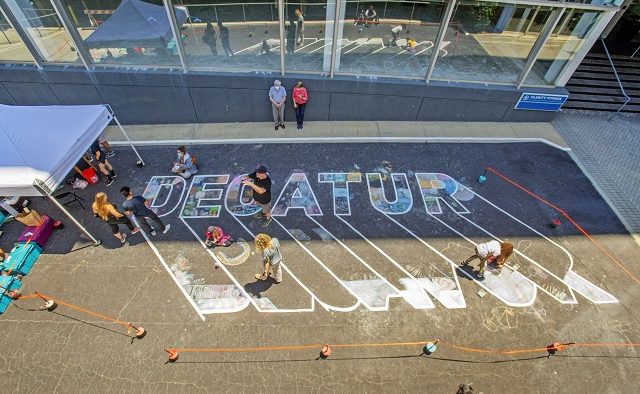 The collaborative mural in the community area seen from the adjacent parking deck during the Downtown Decatur Chalk Walk on Sunday, May 16, 2021. Photo by Dean Hesse.
Share

Decatur, GA — Empty nesters, single parents, single adults and others not in the market for large houses often feel left out in the cold in the city of Decatur’s red-hot real estate market. And the city’s attempts at diversifying its housing types have met with limited success.

In 2015, an update to the city’s Unified Development Ordinance (UDO) allowed the construction of accessory dwelling units (ADUs) in single-family residential districts. The change was designed to encourage the development of more affordable rental options, as well as provide property owners an additional income stream.

But, since that time, only 50 ADUs have been constructed, and many of those are not available as long-term rental housing.

A 2016 effort to construct a cottage court demonstration development on city-owned land at  230 Commerce Drive has languished in search of a development partner.

Both ADUs and cottage courts are part of a group of housing types commonly called “the missing middle,” a term coined by urban designer and architect Daniel Parolek.

“These building types, such as duplexes, fourplexes, cottage courts, and courtyard buildings, provide diverse housing options and support locally-serving retail and public transportation options,” states Parolek on his website. “We call them “Missing” because they have typically been illegal to build since the mid-1940s and “Middle” because they sit in the middle of a spectrum between detached single-family homes and mid-rise to high-rise apartment buildings…”

But public support for increased affordable housing options has not been enough to get them built here, says Decatur’s Director of Planning and Economic Development Angela Threadgill. 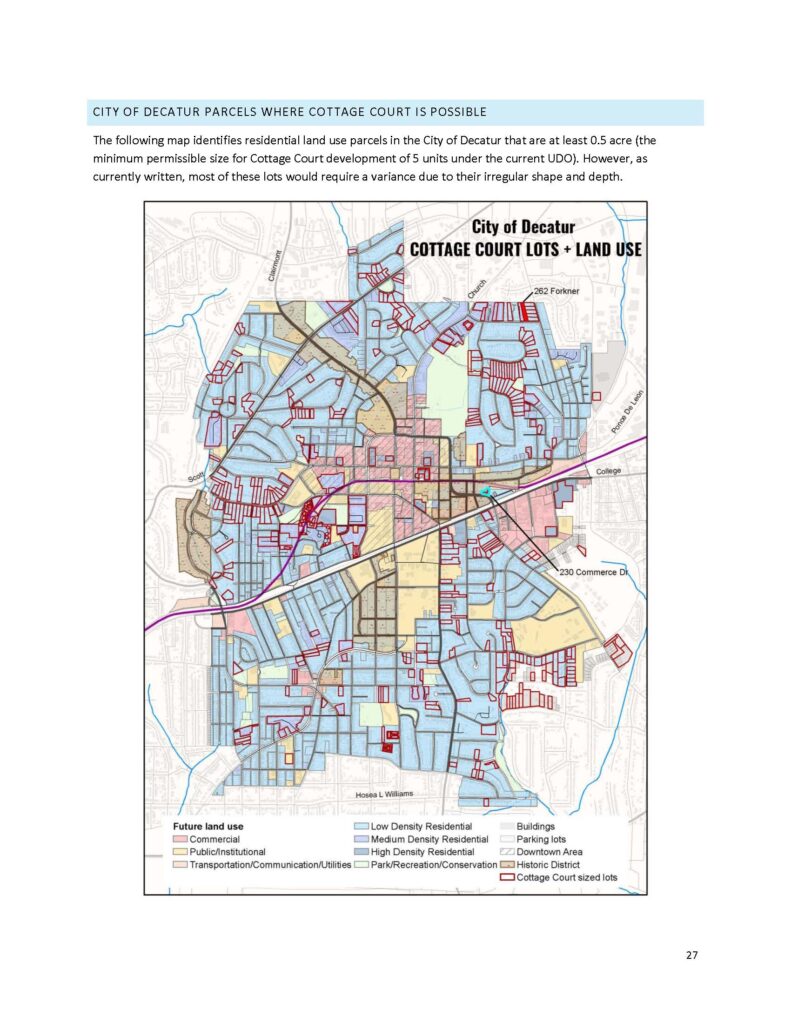 Image obtained via the city of Decatur.

At its regular meeting on Tuesday, the Decatur Planning Commission is set to examine a number of updates to its zoning regulations that city planners say  are needed to support more missing middle housing.

“The [Decatur] Development Authority engaged the services of Clark Property Consulting (CPC) to analyze the feasibility and provide implementation recommendations for affordable housing policies, including cottage court development,” Threadgill said in a memo to the Planning Commission outlining the reasons for the recommendations. “The analysis made clear why developers overlooked cottage courts in favor of townhomes. For example, the 2016 Affordable Housing Policy Analysis prepared by CPC determined that a townhome development had 95% more rate of return than a cottage court development, and a single family home had 86% more rate of return.”

The single biggest factor driving the increase in Decatur’s home values has been the increase in the price of land inside the city limits, Threadgill noted. High land prices in combination with rising construction costs mean that developers won’t consider projects with a substantially lower profit potential.

As for ADUs, the city should allow them to be built on the site of single-family homes that still exist in parts of the city zoned R-17.

In the 1970s, the city upzoned 17 percent of its total land (388 acres) to R-17 in anticipation that townhouses would become a more favorable housing type as the metro area grew, Threadgill explained.

But when such demand for townhouses did not materialize, a 1988 zoning map update downzoned more than 200 acres back to a lower single-family density. However, 5.4 percent of the city, 151.1 acres, is still zoned RS-17 but contains detached single-family homes that were not redeveloped.

According to the memo, the proposed UDO text amendments seek to:

1. Provide more flexibility in the lot dimensions on which a cottage court is allowed, similar to that provided for other types of housing, such as townhomes.

2. Provide more flexibility in the unit density of a cottage court, similar to that provided for other types of housing, such as townhomes. Each zoning district already provides for maximum density limitations. The current UDO language requires cottage courts to have a minimum of five units and a maximum of nine. The proposed update would still keep the minimum number at five, but let the maximum number be governed by the overall zoning district, as it is for other types of housing.

3. Reduce the allowable floor area for cottage court units to promote the production of smaller, more affordable homes. The proposal would allow a maximum square footage of 1,500 square feet per cottage instead of the current 1,800 square feet.