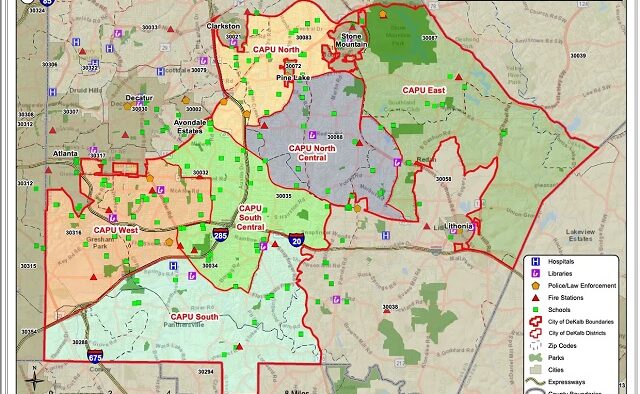 The map for the proposed city of DeKalb. Image obtained via https://cityofdekalbga.com/
Share

DeKalb County, GA — The cityhood movement formerly known as Greenhaven is getting new life this month as advocates are re-crafting their earlier proposal and giving it a new name: the city of DeKalb.

But it’s not at all clear whether the proposed south DeKalb city of more than 200,000 people will have support going into the 2022 Legislative session, which starts Jan. 10. For starters, a bill would need to be introduced in the state Legislature that would allow voters to decide whether to incorporate. No sponsor for that bill has been identified.

But Dr. Kathryn Rice, formerly of the Greenhaven cityhood movement and current coordinator of the city of DeKalb Executive Committee, is optimistic. She thinks a proposed city of Buckhead, which has gained sponsors and momentum, is an opportunity for her organization to advance its goals.

“I think the circumstances are different,” Rice said. “One of the things that motivated me personally to come back was seeing Buckhead emerge and be sponsored and that’s a much more complex situation. You’re not talking about just forming a new city. You’re talking about seceding from an established city. If they can consider all the implications in that, I think we’re a simpler qualified project.”

But state Sen. Elena Parent thinks Buckhead’s cityhood push will scuttle the city of DeKalb’s chances in the upcoming session.

“You know, I think with all the ruckus over the Buckhead secession movement, I don’t think there’s going to be too much appetite to advance other cityhood bills this year,” Parent said.

“I think it’s going to be pretty tough with all the Buckhead stuff going on,” Parent said. “It’s hard to be against one, and for the other. People won’t understand the distinction.”

Parent added, “It should be noted however that they are very different. City of Buckhead proposes to form a city by de-annexing from Atlanta over its objection, while city of DeKalb would be created from unincorporated areas.”

And what is the distinction between Greenhaven and the city of DeKalb?

Other than the name change, not much. Rice said the movement will depend on Greenhaven’s feasibility study, though it may need to be updated to account for population changes. The prior study, dated to 2015, found the city could operate with a $27 million surplus.

Rice said there will be some changes to the map, but declined to discuss those at this time.

:Greenhaven is in the past and we’re going with city of DeKalb,” Rice said. “We’re moving forward.”

The proposal will likely meet with the same neighborhood opposition that confronted Greenhaven. Neighbors Against Greenhaven still has an active Facebook page and the city of DeKalb idea isn’t getting a better reception than Greenhaven did.

Rice feels people should have an opportunity to at least vote on a DeKalb cityhood proposal, just as they have voted in other elections, like the U.S. Senate runoff.

“I don’t see this any differently,” Rice said. “It’s about people having a voice. Democracy.”

City of DeKalb supporters will be holding a town hall on Dec. 8. Here is the full press release from city of DeKalb advoactes:

Southern DeKalb, GA – Citizens in the southern part of DeKalb County are once again asking their delegation to support their effort to create a city. The name of the proposed city is City of DeKalb. The new group, the DeKalb Cityhood Movement (DCM), is organized for the purpose of 1: getting the Georgia General Assembly to support a referendum for citizens of southern DeKalb to vote on whether they want a city to form, and 2: educating and informing citizens about the advantages and disadvantages of forming a city.

The sponsorship of the proposed City of Buckhead, the sponsorship of four (4) cities in Cobb County, and the re-initiation of a proposed city in northern DeKalb motivated both old and new residents in southern DeKalb to propose a new City of DeKalb. Says a new member, businessman DeVon Hudson, the Vice-President of DCM, “Southern DeKalb has one of the highest concentrations of Black people with higher than average household incomes in the United States. I believe we have the capability to form a city that will bring investment, economic development, and jobs, as other cities in DeKalb County have demonstrated.”

The effort to form a city has been ongoing since 2014, with the initial bill sponsored in 2015. Though much of what was proposed in the past remains, the new group believes they have learned more about how the system works and are applying their experience and insights to current efforts.

DCM has planned a virtual townhall meeting for Wednesday, December 8, 2021 at 7pm. You can visit the website “https://cityofdekalbga.com” or the Facebook page “dekalbcityhoodnow” for more details.