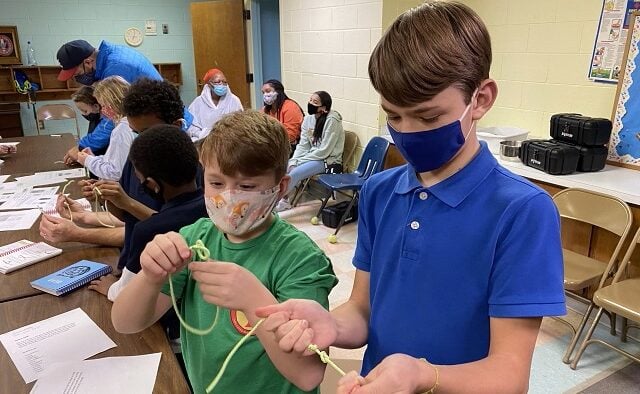 Activity from Pack 876 had been dormant for a decade, but Cubmaster Lyle Collins and committee chair Mark Sauls brought it back this year.

Kids in Pack 876 attend school at Smoke Rise Elementary, Smoke Rise Prep, the Museum School and Camp Creek Elementary. Word got out about the new pack and they were off and running.

“We needed six to officially start the pack. Quickly it was 10 kids, and then some friends from Smoke Rise Sharks swim team found out about it and we were suddenly at 21,” said Collins, who grew up in Smoke Rise.

Collins and Sauls, both Eagle Scouts, have been connected since their daughters were in Parents Morning Out at Eastminster Presbyterian together. They decided to make the group co-ed. Boy Scouts of America in 2019 opened programming to girls.

“Everyone thinks of scouting as being outdoors and going camping, but it does a lot more for personal development and responsibility,” said Collins.

Working as team, developing community and feeling a commitment to follow through are skills Collins learned from scouting.

“I’d like to see my children have the option to participate in that kind of activity,” Collins said.

Parents have been helpful and enthusiastic, especially Jeannette Fusia who stepped up to help with leadership. The pack is excited for spring activities like Pinewood Derby, community service projects and a campout.

The group meets twice a month on Tuesdays for now, Collins said, and they’re still accepting new members. Pack 876 is trying to accommodate parents with multiple kids. For more information about Pack 876, go to https://beascout.scouting.org.