A conceptual drawing of the updated plan for the new mixed-use development at East Decatur Station. The perspective is from New Street. Image obtained via the city of Decatur.
Share

Decatur, GA — The Decatur City Commission has approved a tax allocation district fund request for from developer Northwood Ravin, who has proposed a 372-unit mixed-use development called Halo East Decatur, located at 725 E. College Avenue. The commission authorized the city manager to enter into a development agreement with Northwood Ravin for an amount not to exceed about $5.4 million in tax district allocation funding over a 10-year period.

At least 41 units will be affordable rental units at 80% of the area median income. The project includes public improvements as well, with a greenspace that will be a one acre, and extending Freeman Street, connecting Sams Street and New Street.

“There are some substantial new right of way elements that are being added to the existing framework there,” said Ben Yorker. “We are committed to including a number of inclusionary housing units beyond just the minimum required. I’m excited about the live-work units that we are incorporating. I really do hope that they contribute to supporting and promoting local entrepreneurship.”

The development will additionally include resident artist studios. The space and utilities would be free to the artists and in exchange the artists would have to have open studio hours and art walk events to draw people into the area.

He added that Northwood Ravin is committed to contributing at one-third of the construction cost to work with minority and women-owned businesses. Oakhurst Realty is partnering with Northwood Ravin to find tenants for the retail space in the development. 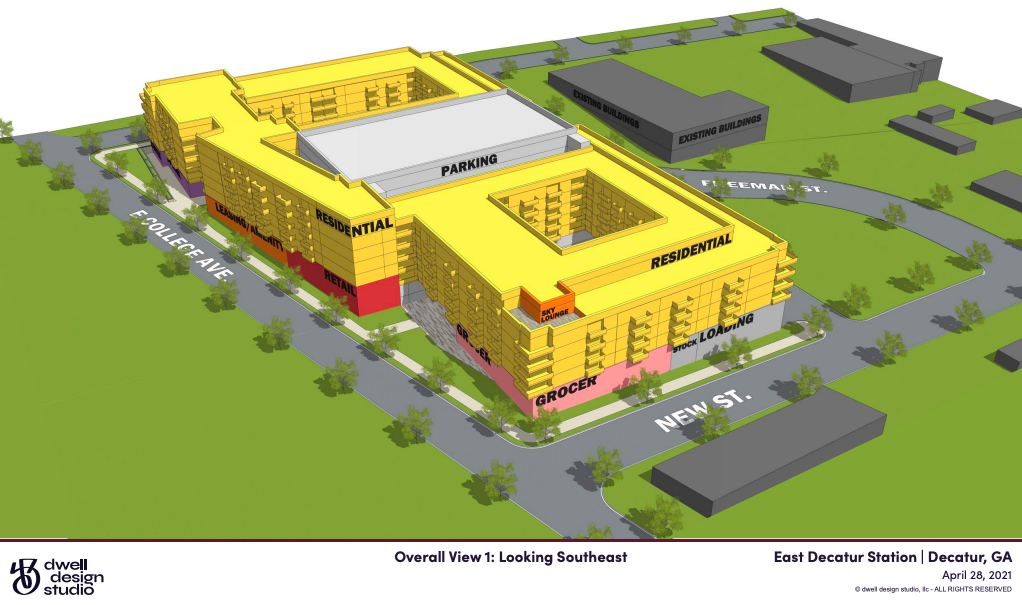 A conceptual drawing of the updated plan for the East Decatur Station development. The view is from Sams Street facing northwest. Image obtained via the city of Decatur.

Yorker requested about $6.5 million in funding from the tax allocation district over an eight-year period, although the City Commission approved a lower amount.

“The staff recommendation is less than the ask, but this is what the staff felt comfortable recommending to the commission for funding,” Allin said. “The conditions would be that it’s in substantial conformance with the architectural renderings, approved site plan and budget submitted with the application, and complies with East Decatur TAD No. 1 redevelopment plan, the city of Decatur [unified development ordinance] and the TAD financing procedures and policies.”

The funds would be distributed over a 10-year period and the first distribution date would be the date of the first temporary certificate of occupancy, which is anticipated to be in January 2024.

For this project, the funding will be used to obtain the right-of-way for the Freeman Street expansion and the one-acre park; the design, grading, landscape and hardscape at the park; and for work related to sidewalks, curbs, gutters, street trees and street parking.

The TAD funds would also go toward construction of the Freeman Street expansion; relocating existing stormwater and sewer infrastructures on Freeman Street; constructing a woonerf also known as a “living street”; building the 50 public parking spaces in the parking deck; and for the retail courtyard.

The City Commission approved the use of tax allocation districts within the city in 2010, which uses tax increment financing to encourage desired development by allowing the city to reinvest future taxes from real estate project development back into a project area and as a way to fund public infrastructure, according to the memo.

The current TAD has a value of about $88 million. The city may use TAD funds for sewer expansion and repair, stormwater management, street construction and expansion, park improvements, curbs, sidewalks and streetscapes, grading and earthwork, and parking. The East Decatur TAD Redevelopment Plan also allows funds to be used for street connections, pedestrian infrastructure, stormwater management improvements and greenspace.

“These tax funds can’t be used outside of the TAD. It’s not an option to use this tax money anywhere else in the city,” City Manager Andrea Arnold said. “There are other properties in the TAD that are generating tax revenue today, above and beyond the base values in 2015. That’s revenue that’s being collected. The taxes are not earmarked to be spent on any specific project. They just have to be spent in the TAD.”

She added the city will have future opportunities to invest in other areas of the district outside the Northwood Ravin project, like other improvements with roads and streetscapes, and opportunities for more greenspace.

“I do anticipate there will be that halo effect [that] this is going to drive more development in that area and contribute positively to the tax revenue generated into this TAD,” Arnold said.

Some eligibility requirements for use of TAD funds include a project having a minimum project budget of $7.5 million. The Halo East Decatur project is estimated to cost about $109 million.

The project must also generate new property taxes through an increase in the taxable assessed value of the property; the project must meet all the requirements of the unified development ordinance; and the applicant must demonstrate that the project would not happen but for the TAD grant assistance.

The projected value of the land post development is about $95 million and the taxable value for the city is half of that, which would be just less than $48 million. It is estimated that the city would collect about $511,000 in taxes and City Schools of Decatur would collect about $1 million in taxes, if this project were developed.

“They did share with me…that the actual enrollment has been far below what they projected,” Allin said. “One of the examples they gave me was they’d project around 100 students, but I think they’re at 29 right now. That can grow over time, but we feel very safe with a projection of 80 students in enrollment based on a conversation with City Schools of Decatur. These are typically spread over all grades.”