Rebecca Selem, exhibits and communications coordinator at the DeKalb History Center, aimed to highlight the history of Avondale Estates that is not usually talked about in the exhibit on the city. Photo by Zoe Seiler.
Share

Avondale Estates, GA — In a small corner of metro Atlanta, one suburb has been known as a “home lovers paradise” but has also developed a reputation for not being welcoming to outsiders.

The DeKalb History Center set out to highlight the history of the Avondale Estates, especially the details that are not often talked about.

“When this first came to be, it was going to be an architecture exhibit,” said Rebecca Selem, exhibits and communications coordinator at the DeKalb History Center. “Then everything happened in the summer of 2020, and I found out there’s more to the story. Then I was like, I can’t just talk about architecture.”

Selem said Kate Wilson’s blog, Circa, served as an inspiration for the exhibit. Wilson is an associate professor of history at Georgia State University. Her husband, Lionel Laratte, is currently the first and only Black commissioner to be elected to the Avondale Estates City Commission.

Selem added that the museum hopes to make Avondale’s history more well known, and the History Center has received good responses so far.

“It’s important to talk about the past, so it doesn’t get repeated,” Selem said. “One of my main goals is I want people to not just take something for what it is, but to do their own research and make sure that you’re learning the whole history, even the uncomfortable parts. It’s important to know the whole picture, because a lot of times people will explain the nice details that they want people to know. There’s way more to the story most of the time.”

Willis, who lived in Druid Hills, set his sight on the quaint, rural community during his many trips to Stone Mountain, where he attended meetings for the Stone Mountain Confederate Memorial Association. This organization led the efforts to create the Confederate memorial carving at Stone Mountain. Willis worked with the United Daughters of the Confederacy and Samuel Venable to organize the construction of “one of the wonders of the world,” according to a poster in the exhibit. 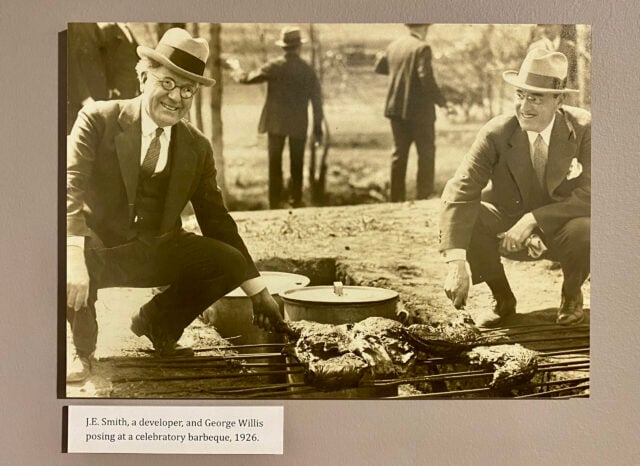 A photo in the “Avondale Estates: The Haven of Health and Happiness” exhibit at the DeKalb History Center shows George Willis (right) with developer J.E. Smith. Photo by Zoe Seiler.

Avondale Estates was incorporated in 1926. At the time, it was reported as the smallest incorporated city in the country.

“Before the transition, Ingleside was a rural town consisting of rolling hills, farms, and woodlands with no paved roads, and few automobiles,” the poster states. “As soon as the purchase was finalized, Willis hit the ground running and began hiring contractors to begin work. The land was soon developed into … miles of graded and paved streets, along with sewers and water mains.”

Willis aimed to develop the land into a “model residential suburb, using international experts in civil engineering to make it the most remarkable in the country,” according to the exhibit.

The development of the city was planned from the beginning and built all at once.

“He wanted to create the seat of an ideally perfect social and political life,” Selem said. “But with this whole exhibit, we’re trying to bring to light details that have been left out of Avondale’s narrative, like how the land was segregated with racially restrictive covenants, which isn’t often talked about. Basically, anyone who was Black couldn’t live within the city limits.”

She added that this was happening in Atlanta at the time too, as prejudiced zoning ordinances were passed and many real estate developers used deed restrictions to prevent Black residents from owning property. In June 1913, Atlanta Mayor James Woodward signed a statute that designated “Colored” and “White” blocks in Atlanta.

“It was basically just middle class white families that could afford to live [in Avondale] and who were able to live here. They geared it a lot toward advertising how good it was for kids to live here, because there were a lot of playgrounds and outdoor areas,” Selem said.

Willis hoped that others like him would also value the city’s amenities and would want to live in the city. His targeted buyers were middle-class white families looking to escape Atlanta. Willis carefully selected the residents who bought into Avondale Estates. 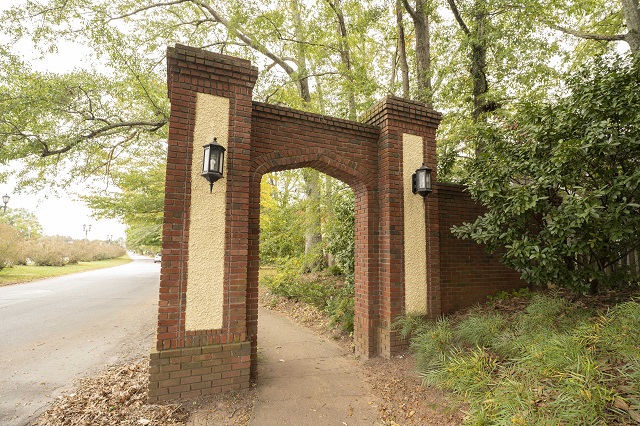 The surviving arch at Carl’s Corner, circa. 1925-1930, marked the western gateway to the city of Avondale Estates. It was restored in 2015. Photo by Dean Hesse.

Selem aimed to highlight the hidden backbone of the city, which were the Black workers who did everything behind the scenes from collecting trash to taking care of children to gardening and working in construction. She wanted to stress the importance of how they weren’t mentioned in history, but they were important.

“A lot of them aren’t even in the narrative of Avondale. You wouldn’t even know unless you really looked,” Selem said. “The only hint that is kind of mentioned is Carl’s Corner, which was named after a Black man who worked for the city. If you look at the signage there, it doesn’t mention anything about him being Black. They just call him a handyman and a gardener.”

Many of the Black workers and their families lived in unincorporated Scottdale and had no water, sanitation, streetlights or paved roads. They were not allowed to live in the city that they worked hard to build up or have the same luxuries as everyone else, Selem said.

Through the years, the city has been revered for its ability to remain unchanged. Some systems of governance kept Avondale Estates’ Black population low compared to other areas around Atlanta. Tactics such as anti-yard sign legislation, which the city passed in 1967, and intense policing were used to enforce segregation and create a hostile environment for Black people. 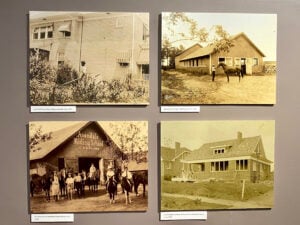 Photos in the “Avondale Estates: The Haven of Health and Happiness” exhibit at the DeKalb History Center shows some Black workers hard at work maintaining the city. Photo by Zoe Seiler.

According to the exhibit, the anti-sign legislation prevented realtors from using “For Sale” signs. (This legislation has since been repealed by the City Commission.) Houses were then only sold through word of mouth, almost ensuring that outsiders didn’t have a chance to live in the city. The legislation banned all signage in the city, and Avondale was not the only small southern town to keep an ordinance like that in effect for decades.

“They were basically making it really uncomfortable for non-residents to be there. If you were Black, you obviously weren’t a resident, so you’d be harassed by the police,” Selem said. “They’re slowly getting better [now].”

The exhibit further describes the history at the time Avondale was established, Willis’ involvement with the Stone Mountain Confederate Memorial Association, the architecture of the city and how the city has changed over the years.

History Center visitors can view the exhibit Monday through Friday from 10 a.m. to 4 p.m. Admission is free and no appointment is necessary. The History Center is located at 101 East Court Square Decatur, GA, 30030. 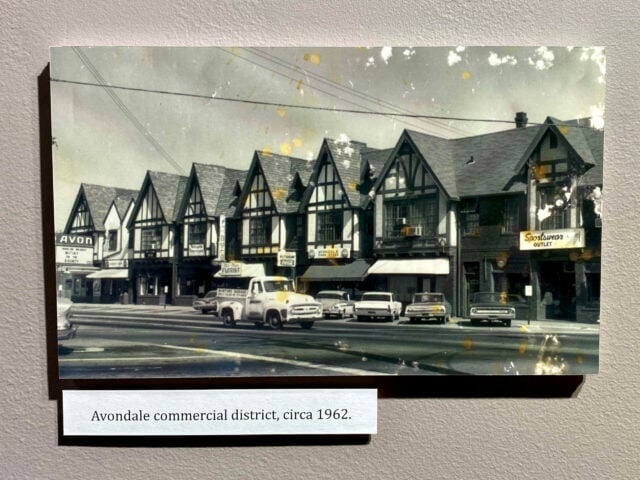 A photo in the “Avondale Estates: The Haven of Health and Happiness” exhibit at the DeKalb History Center shows downtown Avondale Estates circa 1962. Photo by Zoe Seiler.

Correction: An earlier version of this story did not mention that the anti-sign legislation had been repealed by the City Commission. This article has been updated