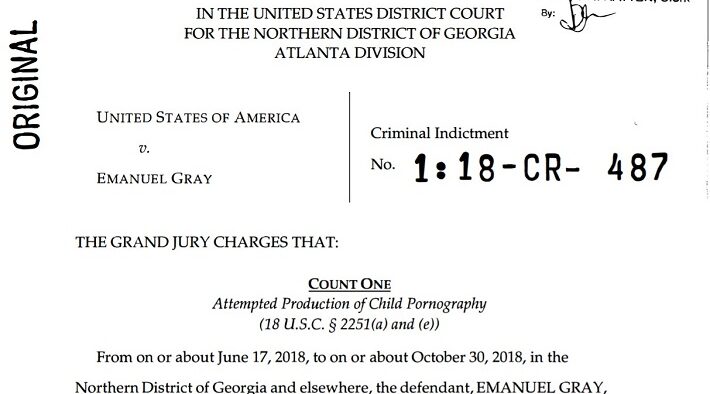 A screenshot of the indictment against Emanuel Gray. Image obtained via Pacer
Share

Greater Decatur, GA — A man from greater Decatur will spend 20 years in prison after a jury convicted him on charges of producing child abuse images and cyberstalking his victims.

“Emanuel Gray has been sentenced to prison for producing child pornography and cyberstalking two teenage girls he met online,” the U.S. Attorney’s Office said in a press release. “After the girls broke off communications with him, Gray coerced them into sending sexually explicit photos and videos, and then retaliated against them when they refused to send him more.”

The 14-year-old testified that they met Gray online and they were in a relationship.

“After she decided to end the relationship, Gray harassed and threatened her until she sent more sexually explicit photos. Gray not only threatened her directly but attempted to ‘expose her’ by posting explicit photos of her on her high school band’s Facebook page,” the U.S. Attorney’s Office says. “The other victim, who was 16 at the time, described being threatened and harassed by Gray in similar manner. Gray sent multiple messages to her high school band’s Facebook page and created multiple fake Instagram accounts to ‘expose her’ as well.”

His attorneys asked the judge for the mandatory minimum sentence of 15 years. They noted he was 19 at the time and said he was “living the life of a teenager” when he committed the crimes.

“Mr. Gray’s behavior is due in part to the fact that his intellectual functioning is in the borderline impaired range and that his academic functioning is at the 4th grade level (9 or 10 years old),” his attorneys argued. “Another factor is that he does not have any real friends to socially interact with. Indeed, Mr. Gray’s sister wrote, ‘Family and friends joked and bullied him about being a certain age but being so far behind mentally and emotionally.'”

His attorneys argued that he adopted an online persona of a bully as a reaction to his bullying.

“Against the backdrop of Mr. Gray’s immaturity, a 15-year sentence is more than reasonable to punish him,” his attorneys said.

The judge disagreed, and the prosecutors supported the sentence.

“Gray stalked and threatened his victims after they rebuffed his demands,” U.S. Attorney Kurt R. Erskine said in the press release. “He terrorized these girls by threatening to post their photographs online if they did not comply. A jury has held Gray accountable for his inexcusable crimes, and he will now serve time in prison.”

Special Agent in Charge of FBI Atlanta Chris Hacker said in the press release that these kinds of crimes “are disturbing but unfortunately all too common.”

“This sentencing sends a message to Gray and any other predators that the FBI will go to any length to bring child predators to justice,” Hacker said. “We would like to remind the community to remain vigilant with online relationships and to never send compromising images of yourself to anyone, no matter who they say they are.”