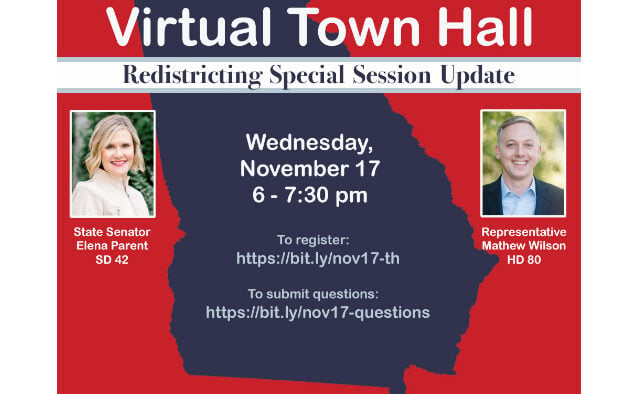 According to the Atlanta Journal Constitution, the Georgia General Assembly on Monday approved new legislative maps and those maps lock-in Republican control of the state Capitol while giving Democrats opportunities to pick up some seats. To read the full story, click here.

“In many ways, this session has unfolded not particularly out of line from what I was expecting,” Parent said. “That doesn’t mean any of it’s good or that the maps aren’t very gerrymandered and the process is not transparent and not fair from a community input, partisan balance, fair representation of growing communities perspective.”

Here is the video of the virtual town hall:

She said the legislature has seen gerrymandered maps and a rushed process to approve the maps of the state House and Senate, and the Congressional districts.

The district lines for municipal races will be considered during the regular legislative session that starts in January.

The House maps were heard in committee on Wednesday and are expected to potentially be voted out of committee today, so the House can have a floor debate on the congressional map on Friday. The House will come back early next week to vote on the maps and adjourn the special session.

Every 10 years, the Georgia General Assembly redraws the lines of the state’s legislative and congressional districts. This process helps determine who controls the state government and its policies for at least the next decade, according to the Georgia Recorder.

The biggest factor affecting the map drawing process is the state’s changing demographics. Since 2010, Georgia’s population has increased by almost 1 million people to more than 10.7 million in 2020.

Over the summer, Parent hosted a Redistricting 201 virtual event with gubernatorial candidate and lawyer Jason Carter; lawyer and redistricting expert Emmet Bondurant; Marina Jenkins from the National Redistricting Foundation; and Michael Li from the Brennan Center.

During the event, Carter said that redistricting happens because the population changes or at least that should be the reason for the process.

The one person, one vote principle comes from this and refers to the rule that one person’s voting power ought to be roughly equivalent to another person’s within the same state, according to the Cornell Law School.

Breakdown of the maps

The legislative maps still give Republicans control of the General Assembly, although it also gives up a few seats to Democrats. The Congressional map, however, would drastically change Atlanta’s northern suburbs to create another likely Republican seat, according to Georgia Public Broadcasting.

“What we’re dealing with on this map is that the Republicans really did do a very effective gerrymander 10 years ago,” Parent said. “Ten years ago was the first time that the Republicans were in charge to draw the map. At that time, their power in the state had been growing and cresting in some ways.”

In some ways, it was easy for Republican lawmakers to try to draw maps with the goal of creating Republican super majorities in the General Assembly, she added. But the changing state demographics made them give up seats in the state legislature.

“Georgia has been changing incredibly rapidly,” Parent said. “We added one million people in the last decade. All of the growth came within communities of color. [There was] very rapid growth in the Asian American population, in the Latino population and also in the African American population. We found that Georgia actually was almost a majority-minority state as of last April.” 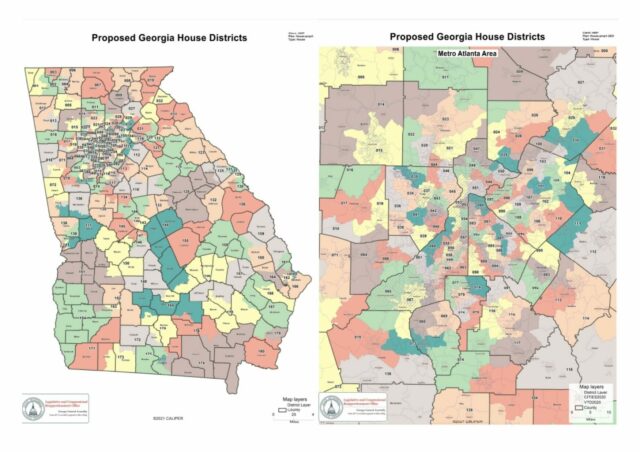 The map of Georgia House of Representatives districts has been approved by the General Assembly and is waiting for the governor’s signature. The maps give Republican a majority, but also conceded some seats to the Democrats. Maps courtesy of the Georgia Reapportionment Office.

There are 180 state House districts, and the current composition of the body is 103 Republicans and 77 Democrats. A party needs 91 legislators to have a majority. The House maps however give the Republicans a majority with about 97 legislators.

“Instead, what they did was they gave up, basically, six or seven different districts and said we’re going to make these more Democratic and take the Republicans from those districts and put them into the existing Republican seats,” Wilson said.

District 83 would become a majority-minority district with 54% voting age population being of minority communities. 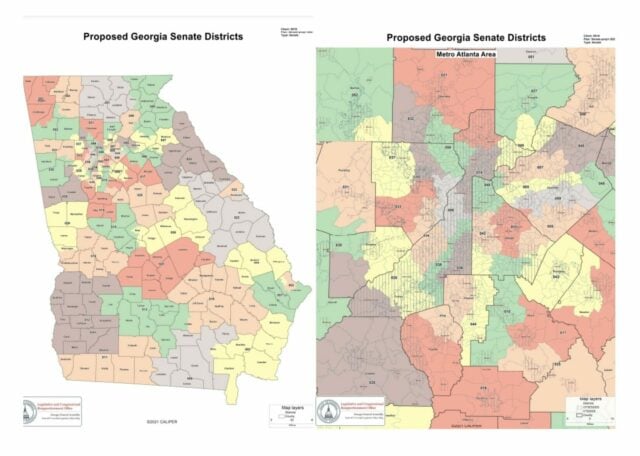 The map of Georgia Senate districts has been approved by the General Assembly and is waiting for the governor’s signature. The maps give Republican a majority, but also conceded some seats to the Democrats. Maps courtesy of the Georgia Reapportionment Office.

The Senate map also reflects some concessions, but still gives Republicans a majority. Senate districts seven and 14 were drawn as concessions to the changing politics and demographics of the state. These are expected to perform as Democratic districts, Parent said.

“Unlike the state House, we do not renumber,” Parent said. “When you see numbers that are lower and are now up in metro Atlanta, you can see where in past redistricting, they had been dismantled from the part of the state they originated in and moved to another part of the state.”

From the beginning, the state Senate district numbers started off with District 1 in Savannah and the numbers became larger moving north.

“She is in an area where gerrymandering can happen,” Parent said. “District 48 is on the edge of these more conservative districts, meaning that gerrymandering in that area is a little bit easier to do than if you’re surrounded by all Democrats.” 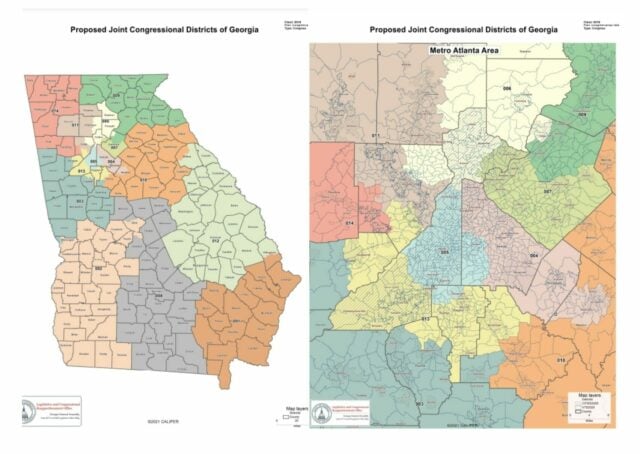 The map of Georgia’s U.S. House of Representatives districts is being considered by the General Assembly and expected to be passed next week. The map gives Republicans a majority. Maps courtesy of the Georgia Reapportionment Office.

The Congressional map, which determines who represents the state in the U.S. House of Representatives, has altered some of Atlanta’s northern suburbs and has given Georgia Republicans a nine to five majority for the states 14 House seats.

On a party-line vote, a Georgia Senate panel approved the Congressional map and it is expected to be debated on the Senate floor on Friday, according to the AJC.

Wilson said that due to population shifts, there was only so much Republicans could do. The Voting Rights Act also provides some protection to minority Congressional districts.

“Given that, basically, what we went into this process knowing is that they’re going to try to take back the 6th District, which was won by Lucy McBath, and do something with the 7th Congressional District, and potentially something with Sanford Bishop’s district down in south Georgia,” Wilson said.

District 6 was drawn to take it away from Democrats and give it to Republicans. District 6, which is represented by Lucy McBath, currently stretches into DeKalb, Fulton and Cobb Counties.

Under the most recent proposed map, District 6 is no longer in DeKalb County. It would cover parts of Fulton, Gwinnett, Cobb and Cherokee Counties. It would also cover Forsyth and Dawson Counties.

Public comment has begun on the maps. Parent and Wilson encouraged constituents to attend the hearings and submit comments through the online portal.