Tucker businesses call for help in negotiating with film industry

Tucker businesses call for help in negotiating with film industry 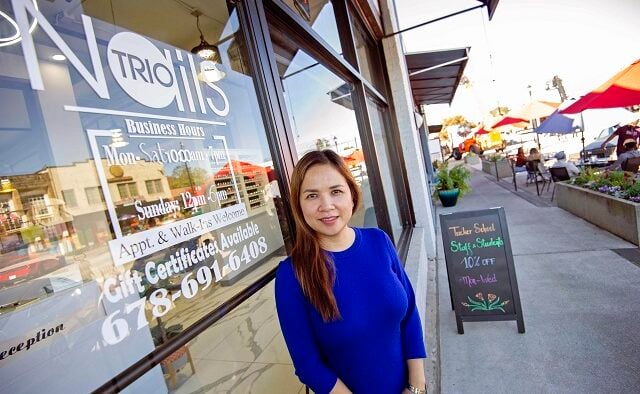 Hanna Nguyen, owner of Trio Nails on Main Street in Tucker, said filming has been disruptive to her business. Photo by Dean Hesse.
Share

Tucker, GA — Tucker’s Main Street is a charming place to film a movie, but business owners say they’re getting the short end of the stick.

When Main Street closed to vehicles this month for filming, business owners reported fewer customers. About 37 storefront parking spots were unavailable to the public as production crew, cast members and equipment overtook downtown. Patrons were stuck seeking other parking to eat, shop and visit Main Street from First Avenue to Railroad Avenue.

Hanna Nguyen, owner of Trio Nails, 2316 Main Street, said locals know where to find alternate parking but those who come from outside the city don’t, giving up when they see Main Street blocked off.

“I am not just losing business this week while they’re filming. I am losing future business. People give up and go somewhere else,” said Nguyen about her customers.

Trio Nails has been open on Main Street for one year. It’s nice to say something has been filmed near your business, but that doesn’t pay the bills, Nguyen said, calling filming “disruptive.”

“They film frequently on Main Street. There are many big projects, which is good for the city but not necessarily for the businesses around the filming.  We can’t negotiate how much we get. We just take what is offered [by the film company],” Nguyen said.

Shea Powell agreed the week had been a struggle. She’s the owner of Hot Betty’s, next to Trio Nails.

On Nov. 11, Powell said the restaurant had lost a ton of business during the week, but that day was better because of Veteran’s Day patrons. She said she was concerned about lost revenue.

Although the film company came by Hot Betty’s to make them aware of the schedule, Powell said she’d been in negotiations all week.

“No one ever brought over paperwork,” Powell said. “We were in negotiations until today when we finally came to understanding. I don’t know where the stall or delay was. It’s a lot of manpower and moving parts.”

Both Nguyen and Powell said the city of Tucker needs an advocate to help negotiate on behalf of the businesses affected by film projects. Powell, who has a professional background in real estate and economic development, said she wants to help.

“We want to support the film industry. If Tucker wants more filming here, we can facilitate it while we make sure there are bulldogs in place to regulate and make sure things are done transparently,” Powell said.

The city’s role is currently limited to coordinating with DeKalb Entertainment Commission, reviewing and approving applications from the film industry and ensuring that businesses and residents within 300 feet of the filming area are contacted, according to city spokesperson Sonja Szubski.

Tucker Business Association was formed 50 years ago to promote and enhance the business community. Tucker’s Downtown Development Authority is a quasi-governmental agency that helps revitalize and redevelop properties for economic development. Neither group, nor the city, are involved in contract negotiations.

Shelbia Jackson, director of DeKalb Entertainment Commission, spoke at the Oct. 25 Tucker City Council meeting about the growth of film production in DeKalb County. Sixty percent of what’s filmed in Georgia is filmed in DeKalb County, she said.

Jackson described Tucker as a “hot spot” for film production. The most popular locations in the city are Tucker Recreation Center, Main Street, Eagle Rock Studios and Smoke Rise neighborhood. Commercial lots on Hugh Howell Road are popular for base camps and COVID testing, which is required on sets, she said.

“You’re very popular. We love working in Tucker. We love putting crew to work in Tucker. And we have a lot of crew that live in Tucker and DeKalb County,” said Jackson.

In 2021, DeKalb County has received applications from 164 film companies, bringing in $288,944 in revenue to cities and unincorporated areas, according to Jackson.

Film and television productions in DeKalb County are expected to bring in $1.3 billion in economic output from 2018 to 2023, according to a new report from the Atlanta Regional Commission, wrote Reporter Newspapers. The report also projects that the industry in DeKalb County will experience a 7 percent annual growth rate between 2020 and 2023.