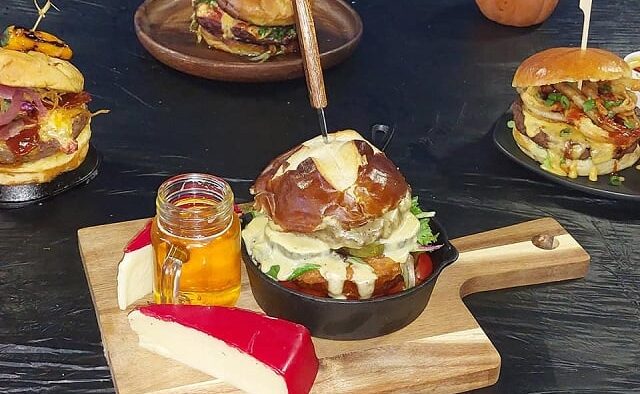 Tucker, GA — Tucker eateries have something new to brag about after a weekend of winning food competitions near and far.

Tucker Meat Market took 4th place in the burger category of the World Food Championships in Houston, Texas, on Nov. 9. Chefs from across the U.S. were competing in categories from bacon to dessert. Tucker Meat Market’s entry was a Southwestern chili vegetarian burger dubbed “Eat it, Peggy,” named after an inside joke among friends at the shop. Andrea Woolf, owner of Tucker Meat Market, said her team of three will advance onto a competition against the 10 other burger champs this afternoon, Nov. 9. That’s the last stop before the final table, or competition, in North Carolina bringing together all of the food categories. The date for the final competition has not been announced, but Woolf said it is usually a few months down the road.

Hungry Hippo Eats food truck, owned by husband-and-wife team Kerri and Johny Walker, won the fried wings category at the Gainesville Chicken Festival on Nov. 6. The “official chicken festival of Georgia” is formerly known as the Gainesville Spring Chicken, but was rescheduled and renamed due to COVID-19. Johny Walker loves to cook and meet new people. He combined those passions in October 2020 when he started the Hungry Hippo Eats food truck to serve Haitian barbecue with a Southern flair. Walker and his wife, Kerri, both cook the food. Photo submitted by Kerri Walker.

The Walkers have lived in Tucker for 15 years.

Hungry Hippo Eats’ fried Haitian chicken wings are a specialty of Johny, whose nickname is “The Haitian Jerk.” Kerri said her husband is actually a laid-back, fun guy who has never met a stranger. Johny hails from New York, and spent part of his childhood in Haiti.