The owners of Calle Latina are opening a Mexican restaurant in Avondale Estates called Santo Cantina. The restaurant is located at the former Good Karma buildings. Photo by Zoe Seiler.
Share

Avondale Estates, GA — A new Mexican restaurant will open in Avondale Estates in a couple of weeks as Calle Latina expands into the city with Santo Cantina and Cocina. The owners plan to open on Dec. 15.

Paul Vinces and Michael Condon, owners of Calle Latina, have been trying to grow the concept of the Decatur restaurant and got the opportunity to move to the former location of Good Karma in Avondale, which closed in February of this year.

Calle Latina, which opened in 2013, offers Latin street food such as empanadas, plantains, ceviche, tacos and arepas. The restaurant however does not serve Mexican food. The owners are taking a different approach to Santo Cantina by offering an authentic Mexican menu.

“The funny part is when we developed Calle Latina, we wanted everything South American and very little Mexican,” Condon said. “We wanted to represent all the South American countries, so that was the idea of Calle Latina. With Santo, it’s pretty much going to be the opposite. We want to do Mexican food, but we want to keep it authentic.”

Vinces added that with Avondale Estates being so close to Decatur, they wanted to avoid opening another Calle Latina location that was minutes away from the original restaurant.

The owners hope to keep the cuisine authentic and brought in chef Pedro Alvarado to do so. He was a chef in Mexico City for about 20 years before moving to the Atlanta area last year.

“I like it because they try to have the essence of authentic Mexican cuisine,” Alvarado said.

One of Santo Cantina’s signature dishes will be chicken mole, which Condon described as being a sacred sauce in Mexico.

Customers will be able to cut a piece of the chicken and dip it into the mole, instead of having the sauce slathered over the dish.

Another signature dish will be the cochinita pibil, which is a slow-cooked pork dish with pibil sauce.

“Cochinita pibil is a traditional dish from Yucatán, Mexico. It’s a ceremonial dish that they use for weddings and baptism and something like that, so the reason that I tried to make the dishes here is because it’s very ceremonial things,” Alvarado said. 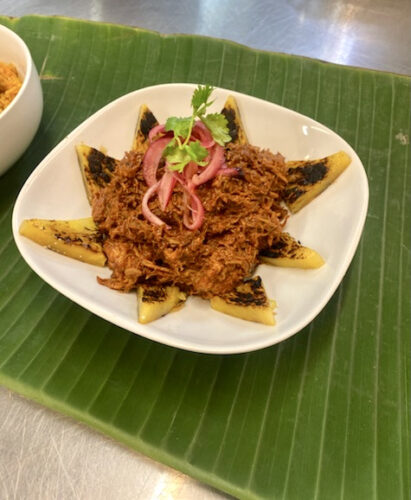 Condon added that there will be some American items on the menu, like a burger and nachos, but the menu will mainly feature Mexican dishes. The menu will also describe where the meals come from in Mexico.

Condon and Alvarado look forward to seeing customers’ reactions as they eat at the new restaurant.

“I’m very, very proud to try to represent Mexican food with a different view…to take another view to the traditional flavors,” Alvarado said.

The space has been designed to have an open flow from the inside to the outdoor patio, with large sliding doors that will allow customers to walk out onto the 1,000-square-foot covered patio. The patio will have fans, heaters and beautiful lighting.

“The inside of the restaurant is going to match the outside patio, and it’s going to feel twice the size. We’re going for that alfresco feel,” Condon said.

He is also looking forward to giving Avondale, and metro Atlanta, a new look at Mexican food.

“Now that Santo is going to be here to stay for Avondale, and it’s going to be an Avondale restaurant, I’m excited to see the look on people’s faces when they’re eating this food and when they’re drinking from our bar.”