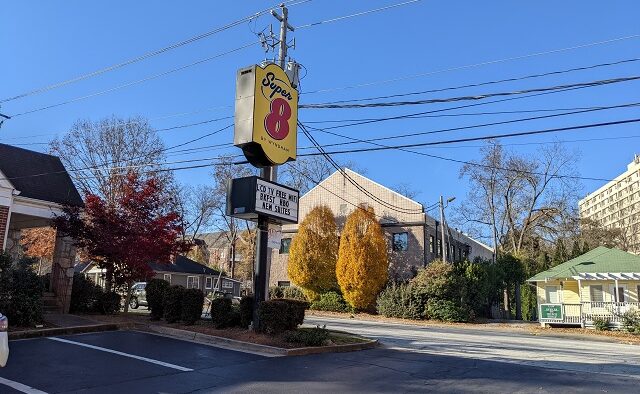 The Super 8 motel in Decatur. Photo by Dan Whisenhunt
Share

Decatur, GA — A child abduction in Cobb County led police officers from that county to the Super 8 motel on Church Street in Decatur.

A spokesperson told Decaturish, “We had an incident last night here in Cobb County where several children were abducted. Our guys started working last night and following leads.”

The spokesperson initially told Decaturish the suspect abducted five children. Later, police said it was three children.  All the children are OK. He didn’t know the ages of the children. The spokesperson said that a man’s ex-girlfriend and several masked men entered the man’s home in Mableton, Ga. on the evening of Dec. 1. Police discovered the 31-year-old man suffering from “several sharp force trauma injuries and lacerations.

“According to [the victim]l, several masked men along with his ex-girlfriend had forced their way into his home, stabbed him, and kidnapped his three children,” the Cobb County Police spokesperson said. “Cobb County Police investigators from the Crimes Against Persons unit were able to track down the children to the Super 8 Motel located at 417 Church St in Decatur, Ga. Our detectives, along with our VIPER unit, responded to the hotel early in the morning of December 2, 2021; and with the assistance of the Decatur Police Department, they were able to recover the children unharmed in the hotel room. [The victim’s] ex-girlfriend and three adult males were taken in for questioning by detectives. This investigation remains ongoing, and anyone with information is asked to call 770-499-3945.”