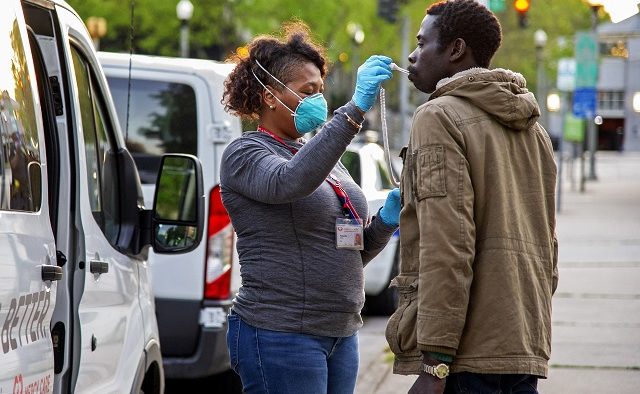 FILE PHOTO USED FOR ILLUSTRATOIN PURPOSES: Natasha Tyson, RN-BSN, from Mercy Care checks Kelvin Scott’s temperature before he can enter a van for transport to a local hotel. Scott, 45, said he has been homeless since July 2020. Photo by Dean Hesse.
Share

Coalitions for Diverse Decatur/DeKalb, Beacon Hill Black Alliance for Human Rights, the Justice for All Coalition, and a Home for Everyone in DeKalb issued a joint press release on Dec. 15. The press release cites the U.S. Department of Housing and Urban Development, noting that homelessness has gotten worse during the COVID-19 pandemic.

Rev. Paul M. Turner of Gentle Spirit Christian Church said in the press release, “Long times of exposure to temps of 50 degrees and lower begin the process of hypothermia. The temperatures the homeless are now facing are more than a crisis, they are facing death!”

According to the Atlanta Journal Constitution, neighboring counties are opening warming centers from 6 p.m. to 7 a.m. when temperatures drop to 35 degrees or below. But DeKalb County hasn’t opened any warming centers. The press release says that the decision to open warming centers would be made by DeKalb Emergency Management Agency Director Joseph Cox and DeKalb County CEO Michael Thurmond.

“In my 23 years of working with metro Atlanta’s homeless population, sheltered and unsheltered, I have never seen such an utter disregard and inhumane treatment of my unsheltered sisters and brothers,” Marshall Rancifer from the Justice for All Coalition said in the press release. “DeKalb County should have stepped up more than 4 years ago to provide shelters and warming centers for its homeless population, which has grown exponentially. Calling metro Atlanta the home of the civil rights movement is a joke now because of the treatment of our homeless folks.”

DeKalb County did not immediately return a message seeking comment.