Connection is key for Afghan refugees adjusting to life in the U.S.

Connection is key for Afghan refugees adjusting to life in the U.S. 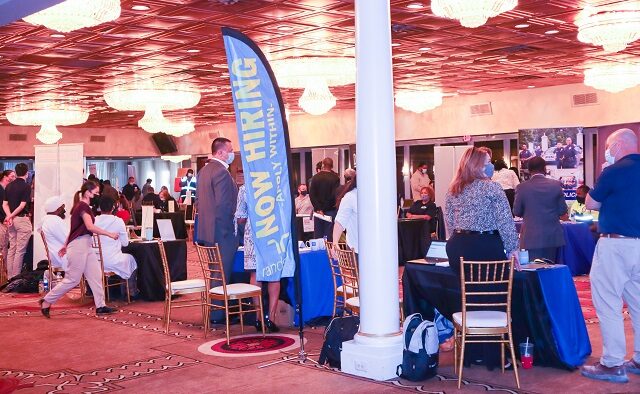 Clarkston, GA — Born in the midst of a civil war in Afghanistan, Sanaullah Hajizada now lives and works in Clarkston. His advice to refugees arriving in the metro area: Don’t wait for your ideal job. Take an opportunity and start building connections.

In Afghanistan, Hajizada earned a degree in business administration. He worked as a logistics officer for International Rescue and Development (IRD) using administrative skills. Upon his arrival to the U.S. in 2015, he took a job in a warehouse at HomeGoods.

“I had an administrative background for ten years, but [businesses] did not believe in my skills and talents because I was not an American, just a refugee,” Hajizada said.

He worked his way into a new job at Suniva, but was laid off along with 100 other employees.

“Stop waiting for your desired job. Whatever you get, take it at the beginning. Build relationships with people. Once you are fully integrated and you have connections, you’ll get a desirable job in your profession,” he advised.

Hajizada met Amplio Recruiting Founder and CEO Chris Chaney, and the company hired him in-house to perform Human Resources tasks and run payroll. Amplio is a staffing company that places refugees in temporary and permanent jobs.

“When people come from different countries, their expectations are so high. Based on my experience, whatever you get, appreciate it. Whatever we get here, we would never get in our countries,” said Hajizada, who moved to the U.S. with his wife and their 8-month-old child.

Because he was previously an employee of International Relief and Development (IRD), a non-profit, non-governmental organization that provides translation, goods and services to vulnerable communities, the Hajizada family qualified for a Special Immigrant Visa (SIV).

SIV is like a fast track to citizenship for Afghan refugees, said Dr. Mary Helen O’Connor, co-founder of MINA (Mentoring Initiative for New Americans) and director of the Center for Community Engagement at Perimeter College in Clarkston.

The city of Clarkston is one of the largest resettlement communities in the U.S., but housing in the area is sparse. Clarkston is essentially full, O’Connor said, so agencies are opening offices in neighboring hubs like Birmingham and Savannah.

The U.S. hasn’t accepted refugees for so long that programs are decimated, O’Connor said. The government is hiring rapidly to accept one of the most historically high influxes of refugees. Globally, there are 90 million displaced people; the U.S. will take up to 150,000 in 2021, which O’Connor described as “a drop in the bucket.”

“It’s important to understand that we take fewer than 1% of refugees worldwide,” O’Connor said.

“People will live in Clarkston for a year, then move to Tucker, Lilburn, or Lawrenceville. They become successful, work hard and move to the suburbs. They want better schools. In Tucker, a lot of folks live across from Tucker Middle School,” said O’Connor, adding that Tucker High School has improved greatly during the past 15 years.

Companies based in Tucker and Stone Mountain are known for hiring refugees, but people like Hajizada trained in a particular skill set or profession often have to change careers, according to Padam Giri of New American Pathways.

Giri said his clients range in age, skills and education, but are ready for opportunities when they arrive in DeKalb County. Younger clients want to go back to college to build a new career, while seniors will seek jobs according to their skills and physical ability, said Giri.

New American Pathways provides assistance to newly arrived families from around the world, typically around 300 to 500 people per year – a number that continues to rise in 2021.

“In 2021, the number of people coming will be particularly high. I’m not sure how long it will last. More people are arriving every day,” Giri said. “I cannot say if it will be more than 1,500.”

Deckers said job fairs are a great tool to find new contacts, even if connections don’t materialize right away – echoing Hajizada’s message of networking. After all, it is a skill that brought Hajizada not only a job, but a community of fellow refugees.

When Hajizada arrived in Stone Mountain, he was assigned a Sudanese case manager from New American Pathways who reminded him of his aunt. She was helpful, kind and reassuring, he recalled.

“She told me, ‘You will be happy. You will be blessed,’” Hajizada said.

Hajizada’s first year was a struggle working in a warehouse, trying to make connections and create community. He met a Muslim neighbor and they spoke to each other in Hindi. Hajizada also speaks Farsi.

“I felt happy there were other people in the same boat as me,” he said.

Now he and 40 other Afghan families gather regularly to celebrate, play, cook and socialize. They mark their own religious holidays and American holidays, he said.

“We will celebrate any holiday,” he said.

Hajizada’s extended family was not as fortunate. His parents and siblings remained in Afghanistan until 2017 when they fled to Turkey.

“They’re not citizens,” said Hajizada. “They have no basic human rights. I am so thankful for the U.S. We have all the rights.”