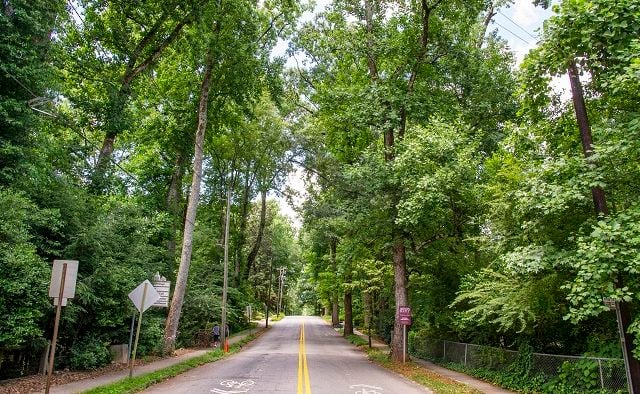 Decatur, GA — The Decatur City Commission will send the amended draft tree ordinance to the Planning Commission for review in January. The board was set to vote on the tree ordinance during its meeting on Dec. 6, but last-minute changes and the realization of needing further review has delayed the vote.

The intent of the tree ordinance is to encourage the conservation of existing trees and provide requirements for the protection, maintenance, renewal and increase in the tree canopy in the city, Decaturish previously reported.

The ordinance, however, is triggered and applicable when someone applies for a land disturbance or tree removal permit. The ordinance is also triggered when impervious area is increased on any property.

One major change under the proposed tree ordinance amendments is that property owners would be required to submit a tree removal permit to remove untreatably diseased, dead or hazardous trees. Discretionary tree removal, which is removing three trees in an 18-month period, would no longer be allowed.

Residential properties would also have to maintain a minimum of 60% tree canopy and would be required to conserve 75% of existing fair or better rated trees when a land disturbance permit is required or where impervious area is increased.

“The concern that was expressed was that you could not remove any tree in fair or better condition from a property that had less than 60% canopy existing,” Saxon said at the meeting. “We did provide some alternatives for adding canopy. At least 50% of the canopy that you added to a property would have to be trees on site, on the right of way, planted in a public park or something like that, or some combination of that with either green infrastructure for solar photovoltaic [system].”

Commercial, high-density residential and institutional properties would have to reach at least 45% canopy coverage and would have to conserve 50% of existing fair or better rated trees when a land disturbance permit is required or where impervious area is increased. For commercial properties that have less than 45% canopy coverage when applying for a land disturbance permit, the property owner must apply for alternative compliance.

A payment to the tree bank can only be made once those other options are exhausted or prove to be infeasible for all property owners, whether on residential or commercial sites.

City Arborist Kay Evanovich said she has had limited payments into the tree bank from residents.

“Most of them choose to plant. That’s what I’ve seen consistently,” Evanovich said. “I think there may have been three that didn’t. They planted as much as they could and then put the rest into the bank, but that was three properties out of 300 plus that had something going on…that was a redesign or remodel. Commercials are more apt to use that. But even here lately I haven’t had one, probably, since January or February of last year that did a payment to the tree bank.”

Other changes to the proposed ordinance include increasing the tree canopy goal.

The canopy credit value has also been adjusted. The current tree ordinance provides a canopy credit, in which new trees receive credit for the tree canopy based on 100% of canopy cover potential at maturity.

The City Commission, also based on a suggestion from Dusenbury, adjusted the canopy credit to be 50% for large trees, 65% for medium trees, and 80% for small and extra small trees.

Concerns were raised during the meeting regarding equity and making sure that the ordinance will not inadvertently impact residents negatively.

“It just really concerns me that we are possibly implementing some sort of ordinance that will benefit people with means and penalize people without,” Commissioner Lesa Mayer said.

Concerns were raised about the canopy loss fee. Under the proposed ordinance, “a canopy loss fee shall be paid to the tree bank by the property owner for any protected tree that is removed.”

“The canopy loss fee is a fee that estimates the benefits lost to the community by removal of a tree. The fee is based on the amount of yearly benefit lost per tree per year, and is determined by using the National Tree Benefit calculator and multiplying the annual benefit for 30 years,” Saxon told Decaturish.

The Environmental Sustainability Board has discussed the canopy loss fee and made no changes to that section of the proposed ordinance.

“A majority of the board felt that a canopy loss fee should be levied to all parties that remove a tree [discretionally],” Energy and Sustainability Manager David Nifong said.

During the City Commission meeting, Saxon said the fee could be expensive depending on the tree. For example, for a good-sized, high-quality tree, the canopy loss fee could be upwards of $10,000. He added that the intent of the fee is to discourage the removal of healthy trees.

Mayer added, during the regular meeting, that the financial implications of the ordinance are flawed.

“It’s going to make it to where a regular, middle class homeowner will not be able to do a substantial renovation to their house and sell it for profit, but a wealthy developer can come in a do whatever they want,” she said. “That’s problematic. That’s inequitable. I think that we can do better than that.”

The canopy loss fee will be evaluated by the Better Together Advisory Board for its review and recommendation regarding any impacts on equity and inclusion, Saxon told Decaturish.

Saxon said if the new tree ordinance is adopted, it will be a different world in Decatur.

“It’s going to be more expensive to develop property. Just to get in the door you’re going to have to pay more to do the surveys, the assessments, and ultimately prescriptions where you’re trying to save trees or build around trees, things like that,” Saxon said. “The goal is to put a priority on saving trees. I think it’s going to affect how people can develop property.”