Williams Teusink is working with Metro Green to renovate the stone chapel and classroom building after purchasing the facilities from Decatur First United Methodist Church. Photo by Zoe Seiler.
Share

“The new owner has shown a commitment to not only Decatur’s history, but also Decatur’s future with the adaptive reuse of Decatur First United Methodist Church’s historic classroom building into unique office space and the adjacent historic 1889 chapel into a special event venue,” Threadgill told Decaturish. “A project that is able to preserve a piece of Decatur’s architectural heritage, increase commercial property values, draw new businesses and jobs, and enlarge the tax base is a win-win for community development.”

Decatur law partners Kyle Williams and Eric Teusink closed on their purchase of the 1899 chapel and Sunday School building of Decatur First UMC on Dec. 31, 2020. The purchase price was $3.2 million.

The partners are working with Metro Green to renovate the school building into office space for their firm, and will lease the remaining space to other tenants

The stone chapel will be used as a meeting and event space, as well as a small concert venue. An agreement between Williams and Teusink and the church will allow the church to continue to use the chapel for weddings and small religious services, Decaturish previously reported.

Williams Teusink plans to partner with an event company to operate and manage the old chapel as an event space.

On Friday, the DDA took a tour of the buildings to see the status of the renovations.

In the chapel, the pews have been removed, the floor was sealed and a new sprinkler system was installed. The pews will be put back but won’t be anchored to the floor, allowing them to be moved around the space.

In between the buildings, Metro Green has built a ramp and stairs. They will have trees coming in the next week and will put sod down in a small courtyard space.

The door at the end of the ramp leads to what was the second floor of the classroom building. This will be the main floor of the office building. Inside the door, the developers have kept the top half of the old wooden entryway door to adorn the wall in the new entryway.

The developers have also repaired and replaced some windows, repaired the roof, improved the bathrooms in the building, are working on the HVAC system and are renovating the classrooms. They are additionally working to install an elevator.

On the third floor, Metro Green salvaged the historic doors, lights and some original trim around the doors. 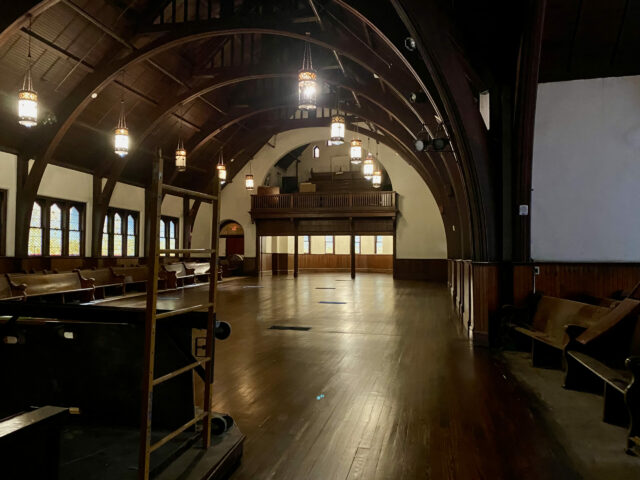 Williams Teusink is working with Metro Green to renovate the stone chapel after purchasing it from Decatur First United Methodist Church. The chapel will be used as an event space. Photo by Zoe Seiler.

— The Publix near the Avondale MARTA station opened on Nov. 3, and the city anticipates that Toll Bros. Inc will finish the 290-unit apartment complex in February 2022.

“At the time of the project approval, 289 dwelling units were proposed, with some flexibility to increase,” Threadgill previously said. “However, one of the conditions of approval by the City Commission was that of the actual units constructed, 65% would be one-bedroom units; 30% two-bed-room units and 5% percent three-bedroom units.”

— Mill Creek Residential is developing Modera Decatur, which is at the old Bank of America site at the intersection of Clairemont Avenue and Commerce Drive. The developers are aiming to open the 194-unit apartment building in fall 2022. The ground floor will be 25,000 square feet of retail space.

— The Decatur Housing Authority purchased a site on West Trinity Place, near the Beacon Municipal complex, to develop a new office building. Threadgill said that project is underway.

“It looks like their completion date is sometime in the fourth quarter of 2022,” Threadgill said. “They ultimately wanted to be closer to the residents that they serve.”

— During the meeting, Threadgill also provided an overview of the city’s real estate landscape.

The average commercial rental rates have increased from $25 in 2020 to about $27 per square foot in 2021. The vacancy rate for available retail space is 14.7% in Decatur and the rate in metro Atlanta is 18.3%

Vacancy report for commercial office space is about 16.1%. The vacancy rate in metro Atlanta is about 25.8%.

“Based on the business closures from that we lost 87 jobs, however, with the new business openings we gained 93,” Threadgill said. “With the departure of Starbucks, we did lose quite a number of jobs, but I think that was offset with the Publix opening and having another major retailer.”