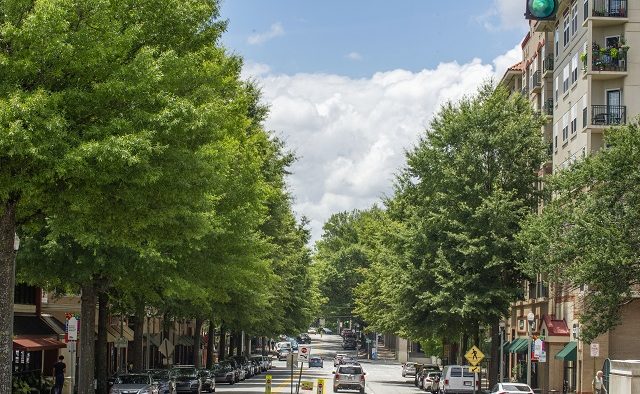 Decatur, GA — Conversations continued last week on Decatur’s tree ordinance as the city’s Environmental Sustainability Board discussed a few recommendations after equity concerns were raised about the canopy loss fee that’s in the ordinance.

The ESB met on Friday, Dec. 17, and will draft another letter of suggestion to the city staff with additional recommendations regarding the tree ordinance.

During the Dec. 6 City Commission meeting, concerns were raised about the canopy loss fee. Under the proposed ordinance, “a canopy loss fee shall be paid to the tree bank by the property owner for any protected tree that is removed.”

“The canopy loss fee is a fee that estimates the benefits lost to the community by removal of a tree. The fee is based on the amount of yearly benefit lost per tree per year, and is determined by using the National Tree Benefit calculator and multiplying the annual benefit for 30 years,” Deputy City Manger Hugh Saxon previously told Decaturish.

“It’s going to make it to where a regular, middle-class homeowner will not be able to do a substantial renovation to their house and sell it for profit, but a wealthy developer can come in a do whatever they want,” she said. “That’s problematic. That’s inequitable. I think that we can do better than that.”

At the ESB meeting, board member Rich Malerba said the concern was the canopy loss fee being so high that it could lead to challenge. The fee in the administrative standards calculates 30 years worth of loss.

He suggested looking at the administrative standard and potentially lowering the number of years used to calculate the canopy loss fee. The board plans to ask the city arborist for clarity around the canopy loss fee and how it’s assessed.

“My suggestion is not to dictate to the city what that should be. It’s to say it seems strong and take a look at that. Is it consistent with other municipalities? If it is, great,” Malerba said. “I’m saying it seems strong, and I’m worried that it may lead to challenges to our ordinance.”

City staff additionally made some changes to the ordinance. One major change to the ordinance would require property owners to submit a tree removal permit to remove untreatably diseased, dead or hazardous trees.

Discretionary tree removal, which is removing three trees in an 18-month period, would no longer be allowed.

Residential properties would also have to maintain a minimum of 60% tree canopy and would be required to conserve 75% of existing fair or better rated trees when a land disturbance permit is required or where impervious area is increased.

Malerba suggested doing the same thing for the regulations related to commercial, high-density and institutional properties — that the alternative compliance section should be incorporated into the general compliance standards.

“It could be done in the same fashion that was done for single-family residences. Eliminate streamlining and eliminating potential issues in the ordinance,” Malerba said.

The board hopes to clarify the process for commercial, high-density and institutional properties.

“I think that this is going to lessen issues down the road, they’ll be able to concisely see what’s going on, make the ordinance more readable, less chance for mistakes and loopholes and different interpretations of it,” Malerba said.

The canopy credit value has also been adjusted. The current tree ordinance provides a canopy credit, in which new trees receive credit for the tree canopy based on 100% of canopy cover potential at maturity.

The City Commission, also based on a suggestion from Dusenbury, adjusted the canopy credit to be 50% for large trees, 65% for medium trees, and 80% for small and extra-small trees.

Malerba suggested increasing the canopy credit for large trees higher than 50% to help encourage the planting of large trees.

“It would be my suggestion that we at least take a look at increasing this for several reasons, not just the planting, but also to make it a little bit easier for some homeowners to select a large tree to come up to their canopy goal,” Malerba said.

The board plans to ask the city staff to look at if increasing the percentage allotment for large trees from 50% to something more in line with medium trees would be beneficial and if it would help encourage the planting of large trees where they could be planting and appropriately spaced out.