Decatur is served: How popular restaurants put Decatur on the map

Decatur is served: How popular restaurants put Decatur on the map 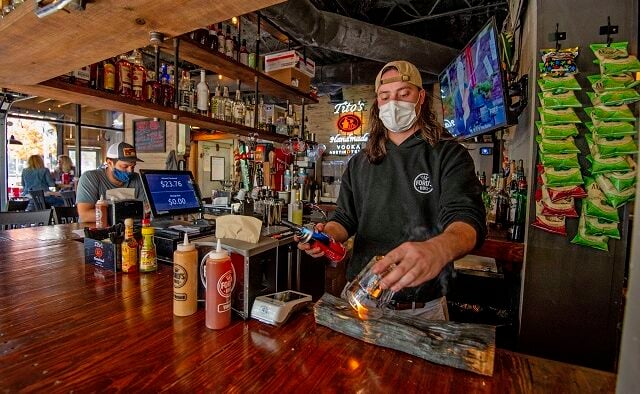 Editor’s note: This story originally appeared as an exclusive in our Dec. 1 e-edition. The e-edition is delivered to paying supporters on the first of each month. To become a paying supporter, visit supportmylocalnews.com

Decatur, GA — When Lyn Menne came to work as director of the Decatur Downtown Development Authority in 1983, there was not much of a restaurant scene to speak of.

“It was primarily breakfast and lunch places that were catering to the courthouse crowd,” she told Decaturish. “There may have been one or two restaurants open for dinner, but they were for early dinner.”

So how did Decatur go from fewer than 10 restaurants then to over 100 across the city now, many of which make routine appearances on “Best of” lists and rack up nominations and awards from the most respected food publications and foundations in the country?

“The real change started in the mid- to late-1980s when we courted Steve Nygren,” Menne said.

Nygren was a successful restauranteur who made a name for himself after opening the Pleasant Peasant in Midtown Atlanta in the early 1970s.

Nygren turned his eye to Decatur and opened up a restaurant called Buck’s in the space where Parker’s On Ponce is now.

“He was and still is a great businessperson,” Menne said. “He didn’t look at other restaurants as competition.”

One or two more restaurants sprouted up in the area, and things began to build from there.

But the Decatur restaurant scene’s next milestone happened just as the eyes of the world turned its way. 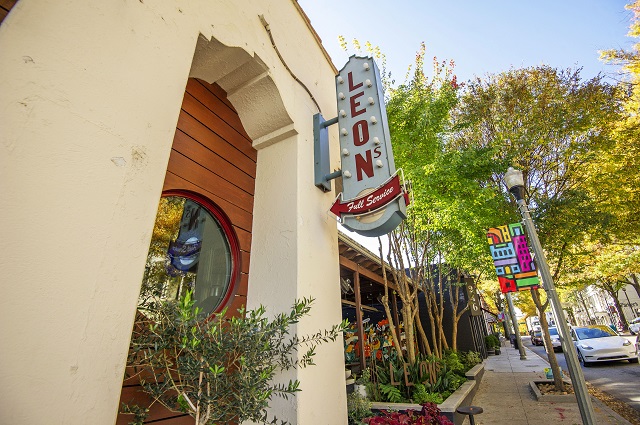 The same year the Olympics came to Atlanta and surrounding cities in 1996, Decatur turbocharged its festival scene.

“He liked that it was near the courthouse, so anyone who lived in DeKalb County would eventually have to go to Decatur to serve on juries, etc.,” said his daughter Suzanne Pichulik Eisenberg. “He really began buying up anything he could.”

Pichulik, who died in 2017, would go on to be the landlord for many popular Decatur restaurants and retail shops including Victory Sandwich, SQ/FT, Raging Burrito, Boutique Karma, Sushi Avenue, Mac McGee, No. 246, Café Alsace, Parker’s on Ponce and Wild Oats & Billy Goats.

Around the same time that Pichulik started investing in downtown, a catalyst for what would happen for the Decatur restaurant scene the next 25 years came in the form of three friends from Athens. 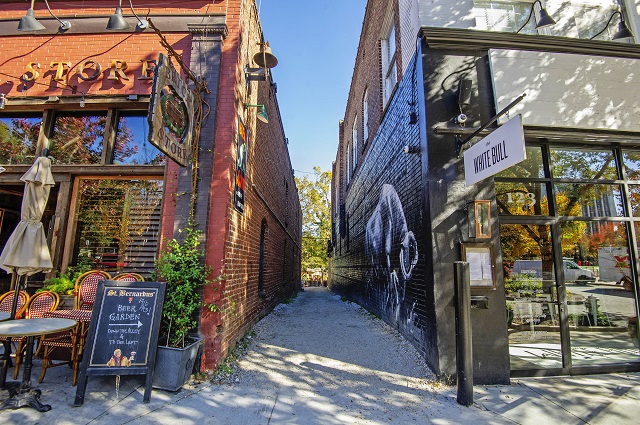 A sign points to the Beer Garden in the alley behind Brick Store Pub on the Decatur Square. Photo by Dean Hesse.

Dave Blanchard, Mike Gallagher and Tom Moore got to know Decatur by going to shows at Eddie’s Attic in the mid-‘90s.

“We felt the town had a great feel and charm to it,” Gallagher said. “The city was very welcoming to us.”

The three went on to open Brick Store Pub in 1997.

“They were wonderful,” Menne said. “What they did was a brand-new type of casual restaurant, they knew beer and attracted a younger market.”

The Brick Store crew then worked with Eddie’s Attic, Trackside Tavern (a restaurant veteran going back to 1982) and Twain’s (which opened in 1996) to start the Decatur Beer Festival in 1998.

But the food was still mainly on the casual side. That started to change with the opening of Watershed in 1998.

“Watershed was a great one that brought life to West Ponce,” Menne said.

The change continued a decade later with the opening of Cakes & Ale and Parker’s On Ponce. Blanchard, Gallagher and Moore also opened Leon’s Full Service that year. No. 246 opened in 2011. Kimball House followed in 2013.

All those spots also helped usher in the craft cocktail experience in Decatur.

“That is the second wave of restaurants we had,” Menne said.

The wave also included a tapas restaurant that opened in 2009. 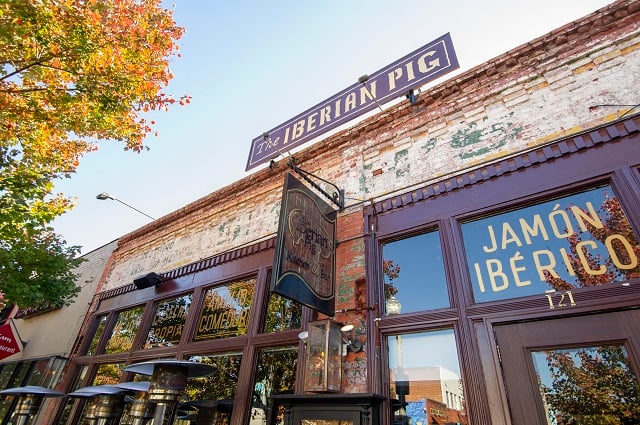 The Iberian Pig on Sycamore Street. Photo by Dean Hesse.

Federico Castellucci was in college when he visited Decatur Square for the first time. He was told the place to go was Brick Store.

“I had a really memorable experience because I was like, there’s no one in the state of Georgia doing anything like this,” he said. “This was before craft beer was even a thing.”

He filed that experience away until several years later when he was scouting locations for a tapas concept called Iberian Pig. A space opened on Sycamore Street, drawing Castelluci back to Decatur Square for the first time since that original visit.

“I just fell in love with the energy and the character of what was happening there,” he said. “The MARTA [station] construction had just finished, so Decatur had just gotten kind of a facelift on the square itself. I remember looking at the location and being like this is it.”

Castelluci remembers wearing an oversized Joseph A. Bank suit to a meeting with the landlord — Louis Pichulik.

“Louis Pichulik made a bet on me because I was 24 years old, had essentially no real past experience and I think he thought I was a lot older than I was,” Castelluci said.

“It’s been a lot of fun to be part of the growth of Decatur Square,” Castelluci said. “Decatur has been really great in facilitating a great climate there for business with the festivals and the events and all the things that go on, on top of all the city planning they’ve done.”

“It’s really been phenomenal, it’s really created a great ecosystem for everyone,” he added.

Gone but not forgotten 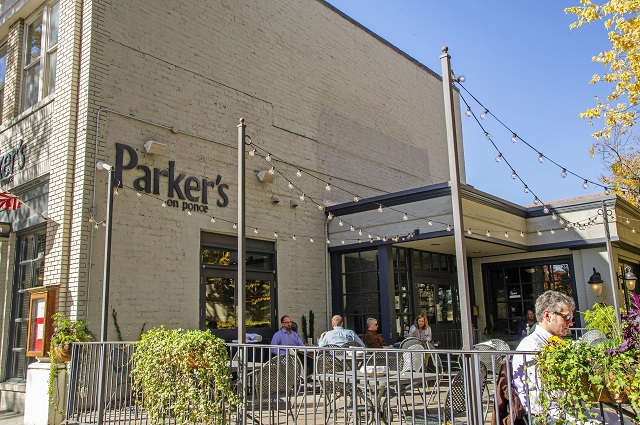 Restaurateur Steve Nygren, who made a name for himself with the Pleasant Peasant in Midtown Atlanta in the early 1970s opened a restaurant called Buck’s in the space where Parker’s on Ponce is now. Photo by Dean Hesse.

As with any restaurant scene, establishments come and go. The same is true in Decatur, including several longtime ones that helped form the food foundation in the area.

One of those is Matador, which closed in the Oakhurst neighborhood of Decatur in May after 15 years. But owner James Maggard didn’t want to leave the area. He opened Ford’s BBQ in the same space in October.

Maggard stuck around in part because so many of Decatur’s restaurant owners live in Decatur.

“It’s not these big groups coming in and doing business and living elsewhere,” he said. “The majority of people that do business here live here and they’re your neighbors.” 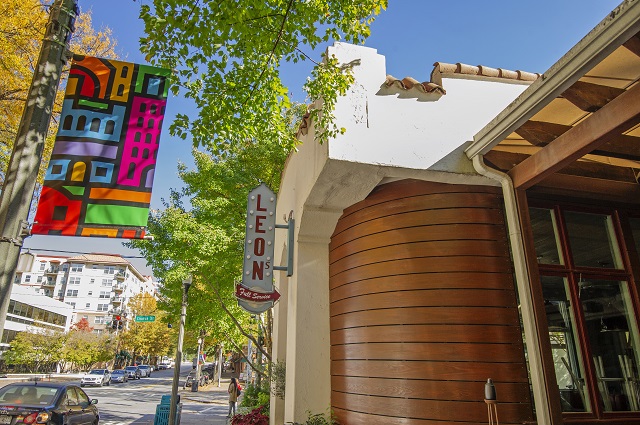 The Decatur restaurant scene has continued to evolve in recent years with the opening of Revival, Deer and the Dove, White Bull and several others.

Most establishments in the area also survived the worst of the COVID-19 pandemic and continue to serve the city. So, the future of food in Decatur is wide open even as the pandemic continues.

Eisenberg wants the scene to “continue to stay exciting.” She said there’s a lot more competition from surrounding cities than there used to be.

“I hope all the business owners, city government and landlords can continue to work together to keep people wanting to come to Decatur,” she said.

“I would love to see happenings that felt a bit fresher, like an open-air market with food like you see in Montreal or Europe,” she said. “Or the farmers market in that location.”

Pichulik also wants the alley behind the Sycamore Street strip of restaurants to be reimagined.

“I’d love to create another pocket of tables in that alley just like Brick Store did,” she said. “These alleys are gems. The hidden nature gives a sense of romance.”

Gallagher wants the city, business owners and property owners to focus on beautifying the city and bringing in more diverse food offerings.

“Continuing to offer more outdoor dining opportunities, evolving our festivals and events to keep up with cultural changes,” he said. “We need to be working together to be sure we’re a top destination to stroll for killer food and drink in a beautiful, safe and hip city.”

“It’s alive and well and everybody’s involved,” Maggard added. “Everyone that comes tends to push the envelope and do a better and better job.”

Correction: An earlier version of this article incorrectly stated that a specific restaurant had opened in Decatur. This article has been updated to remove that reference.