GDOT considers roundabouts for Ponce de Leon, including one at Scott and West Ponce

GDOT considers roundabouts for Ponce de Leon, including one at Scott and West Ponce 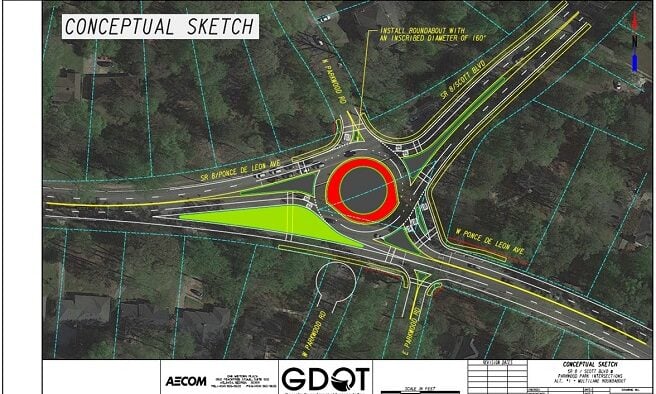 A conceptual sketch of the roundabout at West Ponce de Leon and Scott Boulevard. Image obtained via GDOT
Share

Atlanta, GA — The Georgia Department of Transportation is considering roundabouts at two locations on Ponce de Leon to deal with traffic and safety concerns along the road.

The roundabouts would be placed at Ponce de Leon Avenue and East Lake Road and Scott Boulevard and West Ponce De Leon Avenue.

“Based on the traffic engineering study (data-driven safety analysis) and community feedback from several meetings held in 2019 and 2020, we believe the roundabouts are the preferred alternative for a safety project at these two locations,” State Safety Engineer Manager Sam Harris said.

Harris said the roundabouts could reduce crashes that cause injury or fatality, possibly up to 71 percent in the case of converting a traffic signal to a multi-lane roundabout.

“In addition, roundabouts are not only a safer type of intersection; they are also efficient in terms of traffic operations,” Harris said.

The project is currently in the concept phase and GDOT has held several community meetings about it. There’s no official start date yet. The roundabouts could cost $6 million.

The Druid Hills Civic Association has been on top of this issue and has been keeping residents of the neighborhood updated..

“The DHCA has been lobbying for reductions in vehicular speed on Ponce de Leon to improve overall safety,” the association’s website says. “The Public Safety Committee has been following conceptual changes being considered for Ponce de Leon at key intersections as it meanders through Druid Hills.”

Other safety improvements are on the table as well. To see the most recent GDOT presentation about Ponce de Leon, click here.

In November 2020, DHCA put out a statement supporting the roundabout at West Ponce de Leon and Scott Boulevard.

“The DHCA supports an engineering solution at the intersection of Ponce and Scott Boulevard,” the DHCA website says. “Specifically, replacement of this intersection with a roundabout has the potential to lower speeds at the eastern entryway to Druid Hills and to communicate to drivers they are entering a neighborhood roadway which abuts six parks and three primary schools over the following two miles.”