Decatur, GA — Hiding behind a camera lens, Keson Graham can be found hard at work at almost every sporting and musical event Decatur High School students participate in — everything from sports to band or chorus concerts and theater productions.

Graham graduated from DHS in 2018. During his sophomore year of high school, Graham got his first professional camera and started the DHS pics account on Instagram for his sophomore project.

“I like taking pictures of the games and events. People really like my pictures. They kind of need me sometimes,” Graham said. “That’s how I got started in sports photography at DHS.”

Assistant Activities and Athletic Director David Harbin got to know Graham when he was a student at Renfroe Middle School. He kept up with Graham in high school and were connected when Graham began taking photos at athletic events.

“His friends appreciated that, and we appreciated it,” Harbin said. “That’s where, to my knowledge, this began, at least our connection with his photos, and it’s taken off since then.”

The Decatur Bulldogs Booster Club also connected with Graham to use his photos for social media posts and on the booster club’s website.

Graham said his favorite part of taking photos at the high school is when people ask him to take their photo and sharing photos with others.

“Parents and students contact me to use their pictures for them to post, and I’m more than happy to send them my pictures,” Graham said.

Graham also runs the Decatur Highlights Instagram page, in which he posts video highlights of events. He captures moments that may otherwise be missed, Harbin said. At the beginning of December, Graham was able to film and a take photos of a feel-good moment that happened at a girls’ basketball game.

“It’s a great service that he provides,” he said. “I know that we all enjoy going through and being able to look at the pictures and keep up with what’s happening with our students. That’s a great example of a moment that may not have been captured if he was not there.”

Earlier this month, Graham caught the moment that DHS senior Ellie Rapp scored a basket for the first time with the help of her teammates and the opposing team, Clarkston, at a girls’ basketball game.

The video shows a Clarkston player rebounding the ball for Rapp and shows the uproar of the crowd when she made a buzzer beater shot.

“It made me feel like I was a hero, but also just being myself out there more than I could ever dream of. It was like crazy,” Rapp told WSB-TV.

Harbin and Booster Club Chair Kelly Brooks said that Graham is at just about every sporting event.

“I think he was doing it because he enjoyed it, but it got to the point where he was at so many events, taking so many great pictures, and was always willing to let us use them however we needed,” Harbin said. “We thought it would be great if we could find some way to get him a little bit more officially connected and wanted him to be compensated some for what he was doing. The Booster Club was happy to utilize his services.”

The school has been grateful for Graham and his work, especially that he takes the time to get to various events, even traveling for away games and events.

“I know that our students really appreciate it. The number of followers on social media will attest to that, but also parents and then us as well [appreciate him] highlighting all the great things that our kids are doing,” Harbin said. “It’s not a service most schools are easily able to provide. When there’s someone in the community that is passionate about highlighting our students in general, it really creates something special that wouldn’t happen otherwise.”

In addition to the athletes and students, Graham captures photos and videos of the fans and audience at events.

“For the students, it’s a real unifier,” Brooks said. “People really look to him for what’s going to happen with this game or what happened at that game. They look to him. He does a lot of the fans, not only for us, just with taking fantastic photos. He’s really talented.”

She added that when people see Graham at events, it makes them want to look at his photos and that his photos of the fans make them feel connected to the events, as well as the students.

Graham will also sometimes cover multiple events in one day.

“He is everywhere. There’s not a time when you don’t see him, home and away,” Brooks said. “I’m not even sure he realizes how much the community appreciates what he does.”

Harbin said it’s impossible for anyone to be at all the events and be able to keep up with everything DHS students are doing, and yet Graham makes it work.

“Keson is a connecting piece that allows us to stay informed with what our students are doing, whether it be athletes or performing arts or clubs, and helps us to celebrate them,” Harbin said. While it is impossible for anyone to do that, somehow it is possible for Keson to stay connected.” 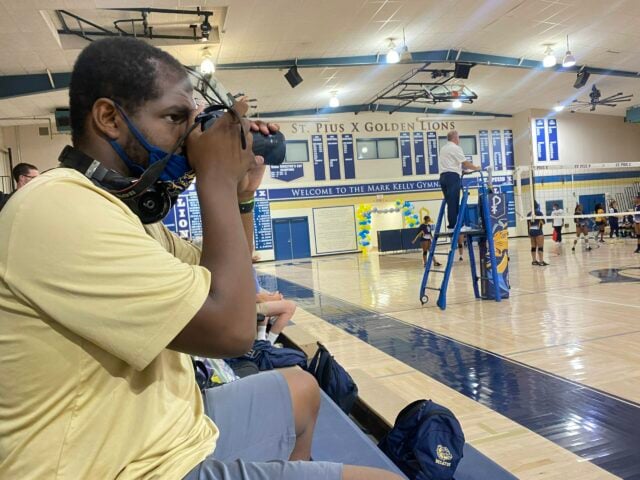