Volunteers in Kirkwood worked over a weekend in October to improve the intersection at Rockyford Road and Emery Place to make it safer for vehicles and pedestrians. Photo submitted by Rebecca Serna.
Share

Atlanta, GA — Rockyford Road in Kirkwood has seen some recent improvements as volunteers worked on a tactical urbanism project to make the intersection of Rockyford Road and Emery Place safer for pedestrians and vehicles.

“We also realigned the intersection with Emery Place to be closer to a 90-degree angle, which slows cars and improves  visibility for drivers as well as people biking and walking,” she said.

The committee received a tactical urbanism permit from the city of Atlanta in order to complete the project. The city also had to approve the project and provided some technical assistance.

The committee took on the project after a number of vehicles had crashed at or near the intersection over the years, including twice when drives landed in someone’s yard after losing control coming around the curve.

“People walking, running, and biking told our committee they felt unsafe on this corner because the road widens right where the sidewalk ends,” Serna said. “We hope the project will reduce the high speeds that are not appropriate for a neighborhood street, improve visibility, and make everyone, but especially people using sustainable modes of transportation, safer.” 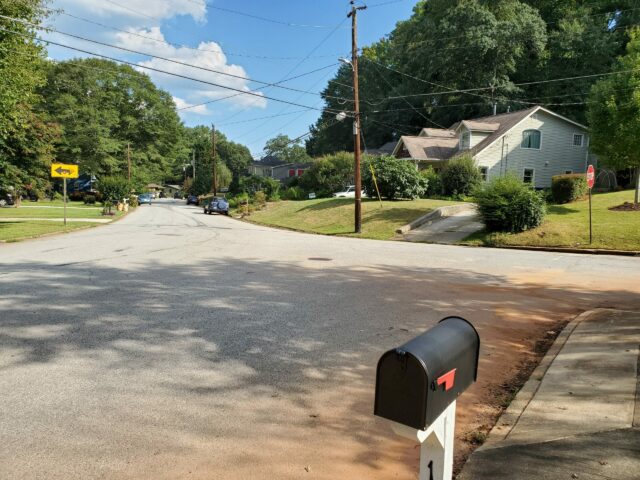 The sidewalk at Emery Place near the intersection with Rockyford ends suddenly. In October, volunteers worked to improve walkability in the area. Photo submitted by Rebecca Serna.

Serna said at the June 10 KNO meeting that the sidewalk at the intersection ends suddenly, and the committee proposed a plan to improve the walkability in the area.

“The transportation committee has heard from a lot of residents along this corridor and came up with a proposal to try to organize the space better and improve conditions for people that are walking, kids on bikes, people with strollers, people in wheelchairs by designating some space for people walking with…traffic barriers,” she said at the June meeting.

The cost of the project is about $3,100 and the committee received a grant from the city of Atlanta Community Impact Fund that will offset the cost.

The committee plans to advocate for more traffic-calming measures and sidewalks along Rockyford Road, along with other streets in the neighborhood, be added in the next Atlanta transportation special purpose local option sales tax. Volunteers with the KNO transportation committee painted parts of Rockyford Road and Emery Place in October to narrow a lane and make the intersection safer. Photo submitted by Rebecca Serna. The Kirkwood transportation committee proposed a project at the June 10 Kirkwood Neighbors’ Organization meeting to improve walkability at the intersection of Rockyford Road and Emery Place. Photo by courtesy of KNO.