Atlanta, GA — Theater students from Lakeside High School will be traveling to Memphis in March to compete at the Southeastern Theater Conference after winning the state competition.

The students won “Best Show” for their performance of “Marvin’s Room” at the Georgia Theater Conference this fall. They competed against about 10 other schools for two spots to represent the state at the regional competition. Perry High School of the Performing Arts also won “Best Show.”

“It was crazy because you never expect it,” Lakeside High School senior Andreanna Kitas said. “We’ve gotten so close through these rehearsals, through these practices, even given the circumstances. To go up there and really give it all up on the stage and to have the rewarding feeling of finally getting to perform it for an audience, it was amazing. To win it was even more incredible, and to have the opportunity to perform it again in [March] is the cherry on top of the cake.”

To prepare for the conference, the students and director took the full-length show of “Marvin’s Room” and cut it down to about a 45-minute performance, or a one act show. During the conference, each school has 45 minutes to get their set on the stage, perform the show, and clear the stage.

“It was an incredible experience,” Kitas said. “There’s nothing more exhilarating than being in front of a huge crowd of people that love theater as much as you do, and to be able to show off this character that means a lot to me and to the family that we’ve made in this production.”

Kitas, who plays one of the main characters in the show, also won “Best Actress” for her performance.

“I was beyond grateful and thankful to our director for helping us get this far,” Kitas said. “Lisa Bridges, who is our little theater mom, she’s always so supportive and really pushes us to do our best work. We wouldn’t have gotten anywhere without her.”

When Kitas accepted the award at the state competition, the event organizer’s had her announce the winner of the “Best Acto”r award as Lakeside High School senior Jay Ponder was honored for his performances in “Marvin’s Room.” Ponder said he was in awe and didn’t know how to react to the announcement.

Ponder played two characters in the show, Hank and Dr. Wally. He is looking forward to continuing sharing them, especially Hank, with an audience.

“I was super happy. We got a few new people in the show. I had experienced [the Southeastern Theater Conference] a couple of years ago right before COVID hit and it was such a great experience,” Ponder said. “When I heard we won, I was super happy mostly because I don’t think I was able to let go of Hank. I didn’t want to move on without him.” 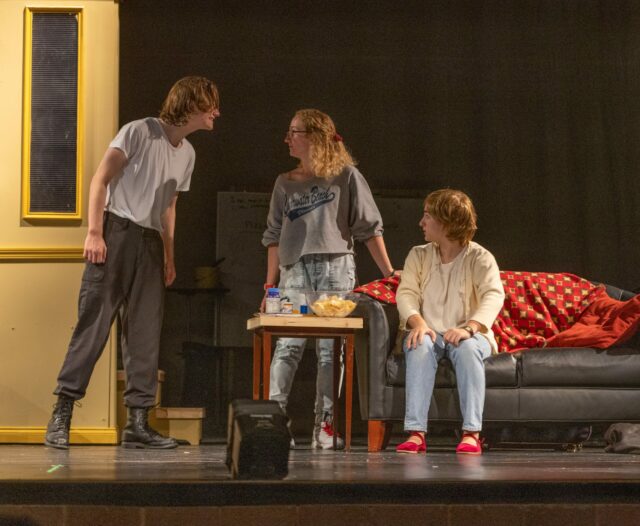 Show director Lisa Bridges said it’s rare for one school to win both the best actor and best actress awards. She described the moment she heard her students win as being like she was at the Tony Awards.

“When Andreanna was on stage and she was given her award, they asked her to read out who received ‘Best Actor’ because they that was from the same show. That’s how big that was,” Bridges said. “”It was so profoundly beautiful.”

For Bridges, just being at the competition and performing was a win, everything else was just the icing on the cake.

“When they announced the other show school first, I was like, ‘Yep, thought that was going to happen,'” she said. “I was just so happy that our students all seemed to be getting that the important part about this was we were there, we were performing, we were together…and we were able to show these people what we’ve been working on. When they announced ‘Best Show,’ I think started crying. I think it was just that big of a moment.”

Senior Cynthia Tinschmidt Leal was in the car with her mom driving back to Atlanta when she heard the news. She said they screamed in the car out of excitement.

“We went there to give the best of ourselves. Obviously, it was a surprise that we won, but we did our best and we gave our all. That’s what we always do. We give our best, and we try to have fun and express our love for acting and theater through our characters and through our story,” she said. “It was very surreal. It was very amazing.”

Senior Molly Malloy was excited to be at the conference and to win again. Lakeside High School won the Georgia Theater Conference in 2019 for their performance of “Never the Sinner.”

“Having that happen again two years later alongside the friends I’m even closer with now really just blew me away. We all love each other and trust each other so much. We’ve formed such a family,” Malloy said. “It felt like winning in the middle of a group of people that support you and trust you unconditionally. I think the relationship that we formed together enhanced that.”

Bridges and her students described the cast and crew of “Marvin’s Room” as being a family, as they’ve grown close throughout their rehearsals and performances. They look forward to attending the Southeastern Theater Conference, being with each other and participating in the other opportunities the conference offers, like workshops and college auditions.

Malloy said that at the state competition, students seem to be more competitive than the regional competition because they don’t know if they will advance.

“But at the second [competition] you realize you’ve been working on a show together for about 10 months, the bonds you’ve made are never going to be broken, you’re going to remember these people your whole life,” she said. “It’s a lot less focused on winning and a lot more focused on performing the show that you guys love for people who you want to impress. I’m just most excited about sharing the stage with that specific group of people one last time.”

Kitas added that she wants to be able to share the story of “Marvin’s Room” with the rest of the Southeastern Theater Conference and be able to express what the show is about.

“It’s a family story and it has a lot of heart to it. I hope to make some people feel something once we perform it and really understand the show,” Kitas said.

Bridges looks forward to getting to Memphis and having her students get the opportunity to enjoy what they’ve worked on. The group is hosting a fundraiser to help fund the opportunity.