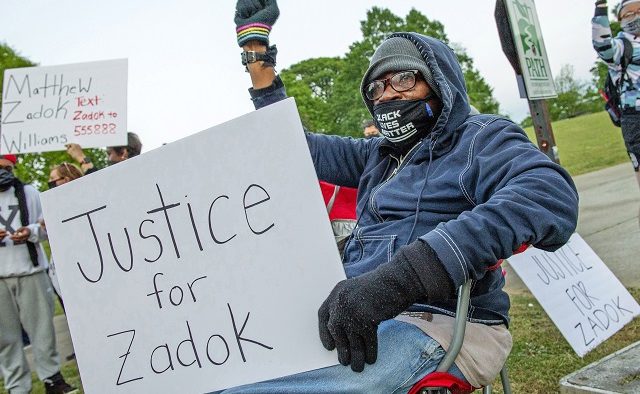 Joetta Burnette holds a sign during an April 23 candlelight vigil at Freedom Park in Atlanta for Matthew Zadok Williams who was shot and killed in his greater Decatur home by DeKalb County Police on April 12, 2021. Photo by Dean Hesse.
Share

DeKalb County, GA — Since July, the family of Matthew Zadok Williams has held a weekly protest each Wednesday.

Williams, who went by his middle name Zadok, was shot and killed in his home on April 12 by DeKalb County Police Department officers who mistook him for a trespasser. Now, Williams’ family and members of the public are calling for the termination of DeKalb County Police Sgt. Devon Perry, who announced his name and fired shots on body camera footage. Police allege Williams lunged at officers with a knife, according to 11 Alive.

Zadok’s mother and five sisters have protested weekly regardless of weather at different locations in DeKalb County, including outside DeKalb Police Headquarters and outside DeKalb District Attorney Sherry Boston’s office. The DeKalb Southern Christian Leadership Conference supports and sponsors the protests. The case has received some national attention due to a July article in the New Yorker. In August, the Georgia Bureau of Investigation turned the investigation over to DA Boston’s office.

DeKalb County Super District 6 Commissioner Ted Terry stated in an email that his office has received “several hundred” emails calling for Sgt. Perry to be fired.

“CEO Thurmond:  I am writing to you in regards to the fatal shooting of Matthew Zadok Williams by Dekalb County police officers in his own home. Zadok and his family deserve justice, which, since his precious life can never be returned, must come by means of the law. The Dekalb County Police Department must take immediate and full responsibility for the heartless killing of Matthew Zadok Williams. Sgt Devon Perry and other officers on the scene broke at least 5 Dekalb police policies in the tragic murder of Zadok!! There is no justification for what Dekalb County police did. Failing to follow the police’s mental health policy, kicking the door open to Zadok’s home, unlawfully firing several rounds of shots at a man through the doorway of his home, leaving him to die rendering no medical aid and turning EMS away, with no contact to his mother until nearly 24 hours later, is evil. How can that possibly be proper protocol? CEO Thurmond, if you have any honor or decency, you will see that Sgt Devon Perry and all culpable officers are fired immediately!  It is the right of Dekalb citizens to demand full accountability for Zadok’s murder. I demand that Sgt Devon Perry be fired immediately!!!”

Commissioner Lorraine Cochran-Johnson has responded to the public’s requests.

“It pains me to no end to see such hardworking, good family endure such pain,” Cochran-Johnson wrote in part in an email response forwarded to Decaturish. “Although nothing can replace their son, brother, friend and loved one, I understand their desire to ensure no one feels the pain they have experienced. I support their request and I’d like to see justice. If the matter were within my control, based upon my understanding of the circumstances, Sargent Perry would be nothing less than off the street until the matter is fully adjudicated. Unfortunately, I am not the decision-maker in the matter and lack the ability to adjudicate this situation with a binding and or final decision. I stand with the family, because Matthew was a beautiful spirit, who reserved the right to be left along and protected. Additionally, no man should be violated in his home. The entire situation is unfortunate and I look forward to all responsible parties having their day of accountability.”

Cochran-Johnson also wrote, “I have and I will continue to pray for Matthew and his spirit — he was a precious and rare soul and I can relate to him in many ways. I would love to work with the family on the establishment of a foundation, non-profit or something that helps ensure people of similar temperament and personality are understood and not violated. I know police officers face many difficult situations, so I am here as an elected official to do my part to reimagine policing, expand skills and education to prevent such tragic endings in the future.”

Commissioner Terry responded to requests for comment, stating, “I can’t comment on an active investigation. However, I am pursuing community discussions around policy reforms on criminal justice and public safety that I ran on in the 2020 election. The urgency is as present now as it was in the aftermath of George Floyd’s murder. We can’t delay on the reforms we promised voters we’d implement.”

In July, Decaturish also published an editorial by Commissioner Terry about the case.

Williams’ mother, Chris A. Lewis, and attorney Mawuli Davis had an in-person discussion about the case in September with DeKalb County CEO Michael Thurmond and Commissioners Mereda Davis Johnson and Lorraine Cochran-Johnson, according to a CBS article. Davis said that the Commissioners were receptive to the family’s concerns.

“DeKalb County’s administrative personal internal affairs investigation into the circumstances surrounding the death of Mr. Matthew Zadok Williams is ongoing and not yet concluded.  Once concluded, the results of the investigation will be thoroughly reviewed and handled in a manner that complies with DeKalb County police departmental procedures and applicable law,” DeKalb CEO Michael Thurmond’s office wrote in a Nov. 24 statement addressing the public’s comments.

The rest of the Commissioners addressed did not respond to Decaturish’s request for comment at the time of publication.

District Attorney Boston has told the Williams family that their investigation of the shooting may continue for six months.