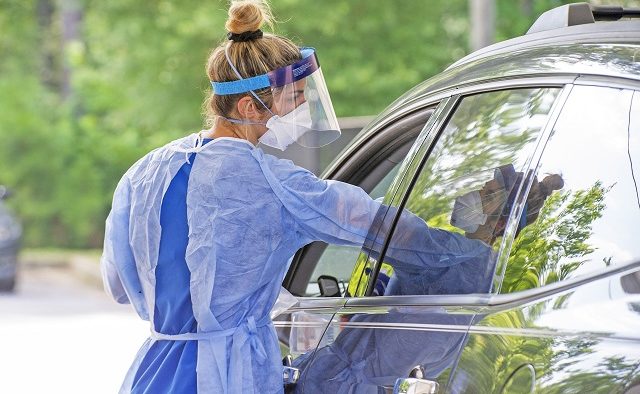 Stephanie B., RN takes a specimen at the DeKalb County Board of Health COVID-19 testing site located in the parking lot of The Greater Piney Grove Baptist Church in Atlanta, July 21, 2020. Photo by Dean Hesse.
Share

Stone Mountain, GA — Stone Mountain City Council held a regular meeting as well as a public hearing on the budget for the fiscal year 2022 on December 7, where they discussed COVID-19 mandates for city employees, speed detection services, stormwater drainage, and more. The meeting was held virtually due to the ongoing COVID-19 pandemic.

The council discussed a proposed vaccine and testing mandate that was brought up at previous meetings. In this meeting, they only focused on the testing portion of the proposal.

City Manager ChaQuias Thornton stated that there has been no recorded exposure to COVID-19 in City Hall since the pandemic began. She noted that due to risk of exposure that they cannot control, such as court proceedings in City Hall, there would still be reason to move forward with mitigation measures even if a testing and vaccine mandate passes.

“Our statistics say that we have done an exemplary job in mitigating exposure [to COVID-19] in this space,” Thornton said.

Councilmember Clint Monroe was concerned with asymptomatic spread – the only way to prevent transmission is to “test, not guess,” an act which he said is “prudent and necessary.”

“Literally, testing is available almost everywhere in DeKalb County,” said Monroe. “I got tested last Thursday and I was in and out of there in a matter of minutes. It’s so easy to do, I can’t see any reason not to be tested.”

The council considered a motion on the testing mandate only, which would require city employees to be tested once per week, free of cost, at a facility near to City Hall. This motion does not include City Council members in the definition of city employees.

Council Member Chakira Johnson felt that such frequent testing isn’t needed due to the lack of spread mentioned by the City Manager.

“If there were spread, would you even know?” asked Councilmember Monroe.

Councilmember Johnson stated that “testing does not mitigate spread, or may not even accurately tell you if there is spread.”

Councilmember Monroe reiterated that he prefers to “stop the guesswork and get verifiable data” by testing regularly.

Councilmember Gina Cox felt that testing once weekly is too frequent. “I want to believe that the honesty policy would stick,” she said, meaning that employees should self-identify if they were exposed to COVID-19.

Councilmember Monroe stated that some state employees test daily, and “all I’m asking for is weekly.” Monroe continued, “Having a deliberate policy of not knowing, of burying your head in the sand, is just irresponsible.”

The motion for a testing mandate failed, with three no votes and two yes votes.

Mayor Patricia Wheeler said that the city would work on the proposal more. It is unclear when the council will discuss an amended proposal or discuss the vaccine proposal.

– During the citizen comments section, residents expressed concerns with the budget and other issues in the city of Stone Mountain.

Resident Joan Monroe claimed that the budget needs a complete overhaul due to numerous typos and lack of detail or explanation, such as relying too much on the sections labeled “Other” for some departments. She also expressed concern about graffiti and vandalism on commercial buildings in the city.

One Stone Mountain resident expressed concern that the city needs to focus on hiring more police and dedicating more money to police resources instead of “always giving money to the Downtown Development Authority.” She also mentioned needing the speed-counter signs in the city as well as code compliance.

Resident Eileen Smith said she is disappointed that the Council is still holding meetings virtually when the city has spent money to make the court safe enough for people to meet, yet Council members went to the Christmas parade, went to election forums and eat at restaurants.

James Whitaker, P.C. was appointed as the City Auditor.

Appointment of City Engineers was tabled to be revisited at next Tuesday’s meeting.

Solicitor Kenneth O’Rourke was appointed as the Assistant City Attorney.

The Champion Newspaper was appointed as the Legal Organ.

– The City Council reviewed a draft of a personnel classification plan that will become effective Jan. 4, 2022. The proposed plan was approved unanimously.

– An intergovernmental agreement between the City of Stone Mountain and the Downtown Development Authority was proposed. The vote on the proposal was tabled to be revisited at next Tuesday’s meeting.

City Manager Thornton emphasized that while some people believe that the city is engaging in a contract of services for the DDA, that is not the case. “Technically, the DDA is a service component of the City, as opposed to a department like public works or public safety. So, whatever subsidy that the City provides from its general fund to the DDA is an investment into a service.”

– An item regarding a stormwater drainage supplement passed unanimously. That project has a probable cost of $30,630.

– The Council passed a resolution authorizing speed detection devices on certain roadways within the City of Stone Mountain, an issue that residents have voiced concerned about at previous meetings.

Councilmember Gina Cox stated that some other type of enforcement for this traffic speed issue is needed, due to the City not having enough officers to monitor certain roadways.

Stone Mountain Police Chief Troutman said that speed bumps would also be considered. Councilmember Monroe suggested that CCTV cameras be used to catch speeding drivers, but Chief Troutman countered that that would be difficult to enforce.

– In closing comments, council members commended the local Lowe’s for their partnership in handing out food to Stone Mountain residents the day before Thanksgiving, and congratulated Kayla Johnson on the success of Stone Mountain’s Christmas Parade this past weekend.