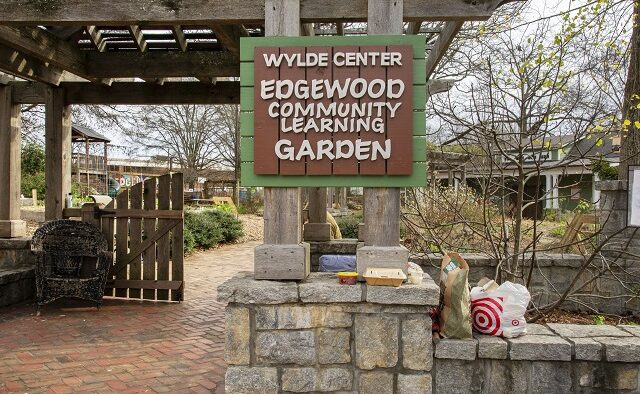 Food and belongings of a person who said they had been sleeping on the porch of the house at the Wylde Center Edgewood Community Learning Garden at 1503 Hardee Street NE in Atlanta for the past 2-3 years and was told last month they had to leave. Photo by Dean Hesse.
Share

Atlanta, GA — After receiving notice to vacate the premises at the Wylde Center’s Edgewood Community Learning Garden, several homeless individuals will have to find shelter somewhere else. The Wylde Center began giving notice to the individuals staying in the garden on Nov. 1. They had until Dec. 19 to remove their belongings from the property by the end of the day.

Since 2015, homeless individuals have sought shelter at the Edgewood Garden from time to time, although the activity was never sanctioned by the Wylde Center.

“Until 2020, the use of the Edgewood Garden by unhoused people was transient,” Stephanie Van Parys, executive director of the Wylde Center, said in a statement. “However, in the summer of 2020, the number of people staying at the Edgewood Garden increased from three to six. They turned the playhouse into a shelter and slept most nights around the Edgewood Garden and frequently used the wraparound porch as their shelter.”

Last year, the center changed the facility to add a porta potty, a water fountain and storage space in an attempt to strike a balance between the operations of the garden and the reality that homeless individuals would shelter there sometimes, the Wylde Center said.

“Unfortunately, over the last 12 months, the Edgewood Garden has become effectively an encampment of unhoused individuals, overwhelming the capacity of Wylde Center staff and jeopardizing our mission to provide education and open greenspace to the community,” Van Parys said. “Wylde Center is not a shelter organization or one that provides services to unhoused people. We do not have the resources that are needed nor the expertise.”

She added that the Wylde Center connected with Policing Alternative and Diversion Initiative to connect the homeless individuals to housing, temporary shelter, medical and mental health services, financial assistance in some circumstances, and transportation to be placed with family.

Although, a 68-year-old woman, who wished to remain anonymous, said the Wylde Center has offered no assistance. She has slept on the wraparound porch for about three years. She said she does not know where she will go.

According to the woman, a neighbor complained, which caused them to have to leave the property. She said most people in the neighborhood were OK with the people staying there.

“They would bring me food and covers and stuff,” the woman said.

Neighbor Adele MacLean, a member of Cop Watch House, said the woman is always helping out around the neighborhood.

“She’s kind of like the grandmother to the whole neighborhood. She’s lived here for years and years. Everybody knows her and helps her out. She helps everybody out as well,” MacLean said.

MacLean added that she has not seen any issues arise involving the homeless individuals at the garden.

“I’m not aware of any problems on that corner other than people just existing and needing housing,” MacLean said. “Certainly haven’t seen anything like violence or a disturbance.” 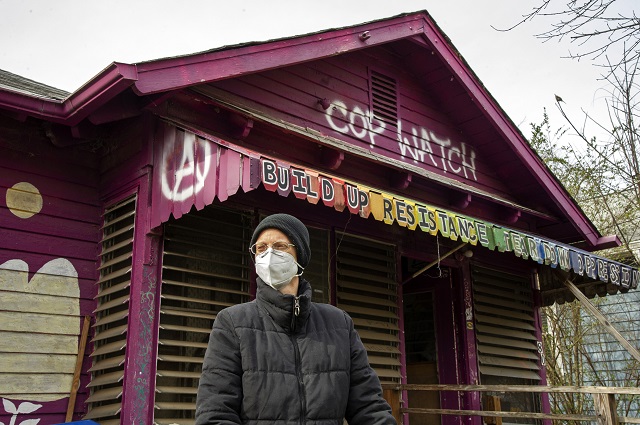 Van Parys told Decaturish that the Wylde Center made the decision for three main reasons — staff capacity, reduced use of the garden by the community and a reduction of educational programs.

“Wylde Center staff are spending time each week cleaning up after the houseless individuals. The workload has increased as staff morale has decreased,” Van Parys said. “The children’s play area was no longer available for use, which is a main attraction for visiting children. This directly impacts one of the main reasons we manage this garden in this neighborhood.”

A nature-based preschool using the Edgewood Garden cancelled their agreement after three months of using the space.

“We were disappointed to lose this regular presence of children in the garden,” Van Parys said. “Our afterschool programs (gardening and cooking) being offered to neighborhood children have seen participation drop as the parents do not feel comfortable having their children in the garden. This impacts another of our goals behind this garden – offering gardening and nutrition education opportunities for youth in the community.”

In the letter, Van Parys goes on to say that the Wylde Center is committed to using resources provided by Atlanta’s Policing Alternatives & Diversion Initiative to help the homeless individuals. Some of them have accepted help from PAD. The center was encouraged to set a firm date and has communicated that, and the center has communicated with APD Homeless Outreach Prevention and Engagement.

A letter dated Dec. 13 was given to the individuals sheltering in the garden notified them that they had until Dec. 19 to remove their belongings or any remaining materials in the garden would be discarded after that date.

“We have been working with PAD since early November and you should have had the opportunity to meet them and discuss your options,” the letter states. “They are going to make a few more visits to offer their services to you before 12/19. We strongly encourage you to accept their help, though we acknowledge that we cannot force you to do so. Regardless of your decision, if you continue sheltering at the garden after 12/19/21, we will have no choice but to take further steps to enforce our decision, up to and including involvement of law enforcement.”

Van Parys said that letter was directly handed to the homeless individuals after several verbal reminders.

Correction: An earlier version of this story misspelled Adele MacLean’s name. The story has been updated with the correct spelling.