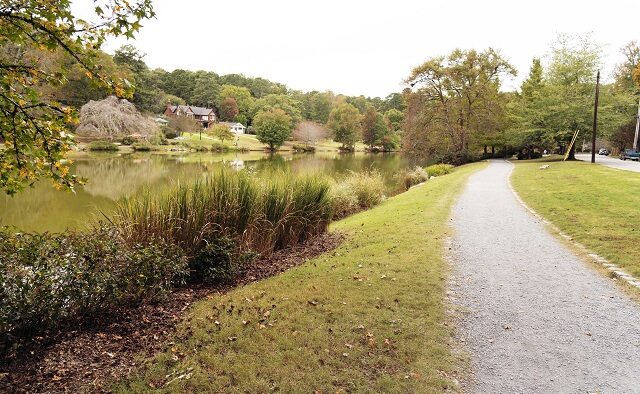 Avondale Estates, GA — The Avondale Estates City Commission, at its Jan. 12 meeting, rejected a bid to construct the North Woods rain garden and other stormwater improvements at Lake Avondale. The city received one bid and the cost far exceeds the budget for the project.

The city received a bid from Reeves Young, the contractor constructing the town green, for a cost of over $1 million for the base bid and about $340,000 for the alternate. The city allocated $950,000 in this year’s budget for the North Woods project. The city has also received $300,000 in grant funding for the project.

Since the bid was more than $450,000 over the budgeted amount and one of the grants would cover less than half of the increase, the city staff recommended the City Commission reject the bid, Assistant City Manager Paul Hanebuth said in a statement.

During the City Commission meeting, City Manager Patrick Bryant said the bid came in 40% higher than the estimated cost.

“Given the fact that we do not have money budgeted to pay for that increased cost, we are requesting that the board formally reject that bid so that we can explore future options,” Bryant said. “We do have two grant awards tied to this project that we fully intend to utilize.”

One option the city will explore pursing construction of the project through the state bid process to complete the North Woods project.

“It’s important to me that we get this project done as I think it’s a big start to beginning to fix some of the stormwater issues especially and get the health of our lake back where it needs to be down the road,” Mayor Pro Tem Brian Fisher said. He was supportive of going through the state bid process to see if the city can receive a better bid.

Reeves Young is also the firm that estimated the cost of the project. The firm did not give feedback on why the bid came in higher than expected, Bryant said.

The master plan also identified the potential for trails through the North Woods, and there are currently informal trails throughout. The project aims to build on the master plan, take a green infrastructure approach and create an outdoor recreation area with accessible trails.

In August 2021, the design team broke the project into the base bid and three alternates. The base bid includes building a portion of a path that is ADA compliant. It also includes grading, preparation for the rain garden site, stream bank slope repair, signage and a bench.

The first alternate includes three rain gardens, adds passive recreation space and mitigates erosion.  Last year, the commissioners agreed to send the whole project out for bid and agreed that at least the base bid and the first alternate need to be completed.