Atlanta, GA — President Joe Biden described concerns for the nation’s future elections during a visit to Atlanta on Tuesday, Jan. 11. Joined by Vice President Kamala Harris, the pair urged the U.S. Senate to pass voting rights legislation and secure the right to vote.

“Today [Jan. 11], we call on Congress to get done what history will judge. Pass the Freedom to Vote Act,” Biden said. “Pass it now to prevent voter suppression.”

Two voting rights bills sit before the Senate for consideration. The Freedom to Vote Act, which was cosponsored by Sen. Raphael Warnock, would establish Election Day as a national holiday, set national minimum standards for early voting and voting by mail, and create new requirements for groups to disclose their financial donors, according to NPR.

The legislation was blocked by a Republican filibuster in October 2021.

The John Lewis Voting Rights Advancement Act would replace part of the Voting Rights Act of 1965 that the U.S. Supreme Court struck down in 2013. The legislation aims to restore Justice Department review of changes in election laws in states with a history of discrimination, according to USA Today.

The legislation failed to advance in the Senate on Nov. 3, 2021 as it did not receive the 60 votes needed to overcome a filibuster, which prevented the start of debate on the bill. 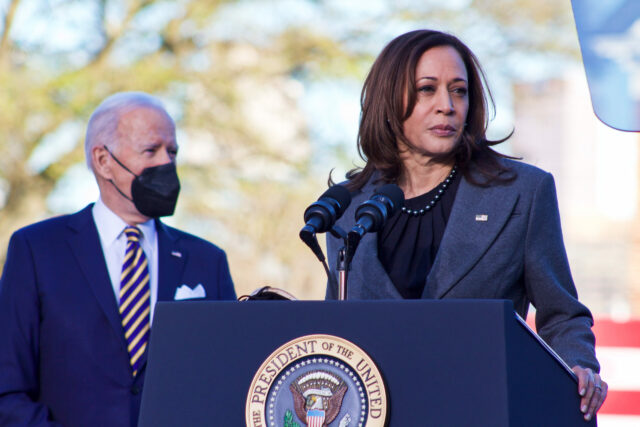 During his speech on Tuesday, Biden expressed his frustration at Republicans who have blocked voting rights bills and called on the Senate to change its filibuster rules.

“I’ve been having these quiet conversations with members of Congress for the last two months. I’m tired of being quiet,” Biden said. “I believe the threat to our democracy is so grave that we must find a way to pass these voting rights bills, debate them, vote, let the majority prevail.”

The Senate is expected to discuss voting rights in the coming days. Senate Majority Leader Chuck Schumer set a deadline of Jan. 17 for the chamber to vote on a rules change, CNN reported. If the legislation continues to be blocked, there’s no other option besides changing the Senate rules, including eliminating the filibuster, Biden said.

“I support changing the Senate rules, whichever way they need to be changed to prevent a minority of senators from blocking actions on voting rights,” he said.

Biden added that “we must translate eulogy into action. We need to follow John Lewis’ footsteps,” as he encouraged the passage of the voting rights legislation named after Lewis.

“Democracy is who we are, who we must be now and forever,” Biden said. “Remember, as I said, this is one of those defining moments in American history.”

Biden and Harris also criticized states that have enacted restrictive voting laws, including Georgia. Last year, the state Senate passed the “Election Integrity Act of 2021” which made a number of changes to absentee voting, early voting and vote counting. Other changes impacted local elections offices and the State Election Board, according to Georgia Public Broadcasting.

“Over the past few years, we have seen so many anti-voter laws that there is a danger of becoming accustomed to these laws, a danger of adjusting to these laws as though they are normal, a danger of being complacent, complicit. Anti-voter laws are not new in our nation, but we must not be deceived into thinking they are normal,” Harris said. “There is nothing normal about a law that makes it illegal to pass out water or food to people standing in long voting lines.”

Harris added that these laws not only put obstacles to the ballot box in place, but interfere with elections.

“That is not how a democracy should work,” she said. 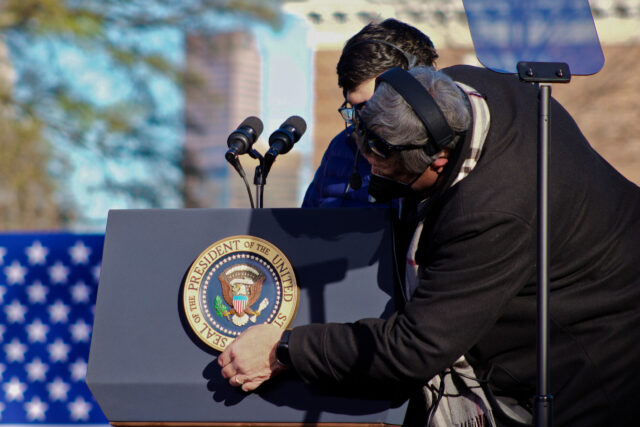 After speeches from the university presidents, crew members placed the presidential seal on the podium in preparation for President Joe Biden to take the state. Photo by Zoe Seiler.

Many national, state and local leaders were in attendance at Clark Atlanta University while Biden and Harris delivered their speeches. Rep. Hank Johnson (GA-04) said, in a statement, he was proud to be with the president and vice president as they discussed voting rights.

“Across the nation, partisan forces are waging the most brazen and cynical assault on the ballot box in a generation,” Johnson said.  “Since the Supreme Court gutted the Voting Rights Act in 2013 and doubled down on this assault again last year, state and local lawmakers – including here in Georgia – have used this moment to pass a surge of voter suppression laws that are silencing the voices of voters of color and other communities who have long been disenfranchised.  That’s why I was proud to be with President Biden and Vice President Harris today at the Atlanta University Center, telling the world that failure is not an option when it comes to voting rights.”

He added that the Senate has changed its rules before, and it must do so again. He urged the senators to pass the two voting rights bills.

Atlanta Mayor Andre Dickens also attended the event and said Biden and Harris’ trip to Atlanta underscores the importance of the city’s voice in fighting for voting rights.

“Bringing this message to the Atlanta University Center — where the Atlanta Student Movement was birthed — was a pivotal and poignant choice,” Dickens said in a statement. “As the cradle of the Civil Rights Movement and home of Dr. Martin Luther King Jr., Atlanta helped change the composition of the U.S. Senate by electing Senators Raphael Warnock and Jon Ossoff. Passing the Freedom to Vote Act and the John Lewis Voting Rights Advancement Act must happen if we hope to preserve our democracy.” 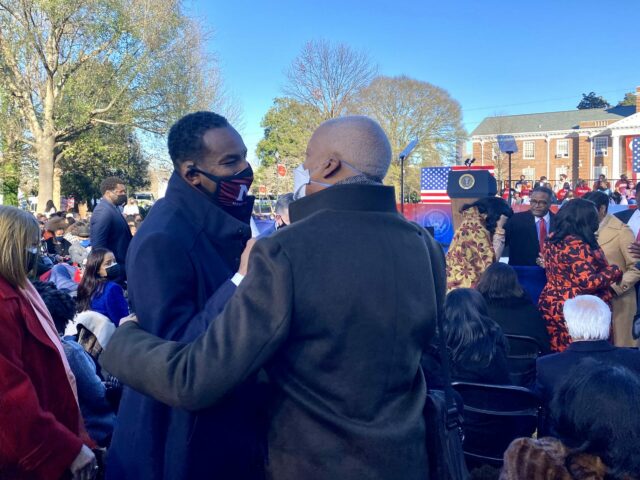 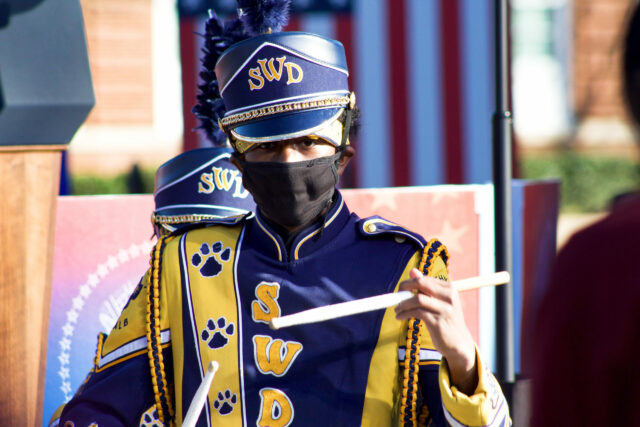 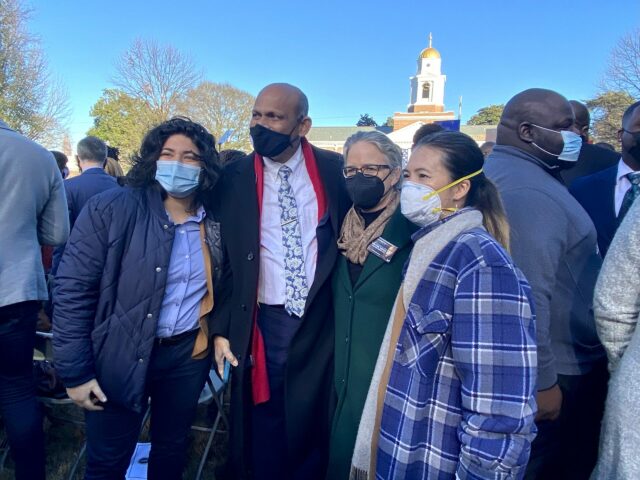 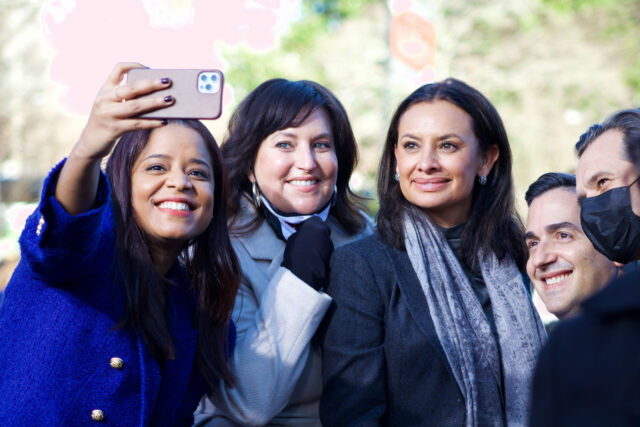