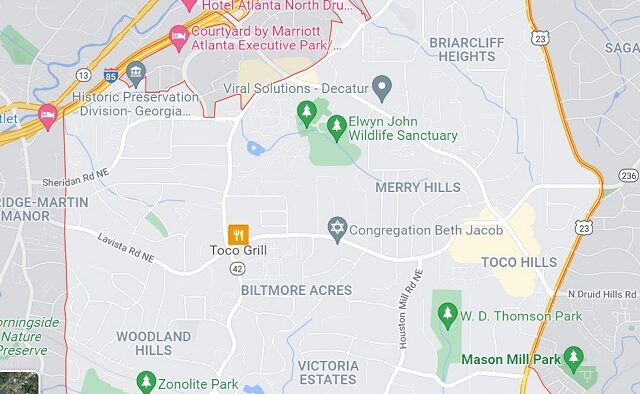 Some residents of the Woodland Hills, Biltmore Acres, Merry Hills and Toco Hills neighborhoods have expressed an interest in joining the city of Brookhaven. Image obtained via Google Maps
Share

Atlanta, GA — A proposal to carve out a chunk of Atlanta and create a new city of Buckhead is having knock-on effects here in DeKalb County.

Neighborhoods on the southern border of the city of Brookhaven are now debating whether to annex into that city. Their inquiries are partly due to concerns that should Buckhead leave Atlanta, it would require Atlanta to seek revenue from DeKalb County. Some residents of the Woodland Hills, Biltmore Acres, Merry Hills and Toco Hills neighborhoods have expressed an interest and held a meeting Jan. 13 to discuss the possibility, though it’s all preliminary. If these communities decided to annex, it would likely be via a petition that requires signatures of 60 percent of landowners and 60 percent of voters.

“I think there are a lot of folks [concerned] because of Buckhead,” Ernst said. He said many residents are asking themselves where they’d want to be if they had to choose between Atlanta or Brookhaven.

“If we do nothing, if that’s what we decide, it could be decided for us at some point,” Kellum said during the Jan. 20 town hall. “If … Atlanta were to petition the legislature — and it’s been conjectured that if the city of Buckhead goes through, Atlanta might go on a land grab —  If they petition the legislature, it would go to a vote. Unfortunately, in those type of elections, only about 50 percent of the registered voters turn out for those opportunities. If we had 50 percent show up to vote, a 26 percent vote could be a majority. Would you want a 26 percent of your neighborhood making a decision for the other 64 percent?”

Josh Kahn, a member of the Toco Hills neighborhood, said his neighborhood’s interest predates Buckhead cityhood. But things are stirring now, he said.

“There’s been a moderate level of interest in the Toco Hills area of annexing into Brookhaven for a while,” Kahn said. He said interest has “spiked in the last few months” due to concerns about crime. Brookhaven has its own police department. Toco Hills and its uninrorporated neighbors are served by DeKalb County Police at the moment.

“I’ve had some preliminary conversations with some folks at the city of Brookhaven,” Kahn said. “That’s where we are.”

And Brookhaven has been receptive to the idea. Kahn and Kellum did not know if any commercial properties in the area, like the Toco Hills shopping center, would also want to follow neighborhoods into the city of Brookhaven.

If these neighborhoods were to join Brookhaven, they would do so at the current tax rate they’re paying DeKalb County until their infrastructure is brought up to the city’s standards.

Burke Brennan, a spokesperson for the city of Brookhaven, said if the city wants to expand, it could only go southward.

“Brookhaven is landlocked everywhere except to the south,” Brennan said. “We already share borders with Atlanta, Sandy Springs, Dunwoody and Chamblee.”

Brookhaven also has asked one of its lobbyists to start making inquiries in neighborhoods on the city’s southern border about their intentions.

“But we are still very early in the process – there is no map, and no defined borders,” Brennan said. “But then again, we are talking about a limited unincorporated area.”

There will be a second town hall meeting on this topic on Jan. 27 and an in-person meet and greet on Feb. 3, Kellum said. Decaturish has asked for additional details about how the public can attend these events and will update this story when that information is available.