Councilmember-elect Liliana Bakhtiari made history, and is now ready to serve Atlanta

Councilmember-elect Liliana Bakhtiari made history, and is now ready to serve Atlanta 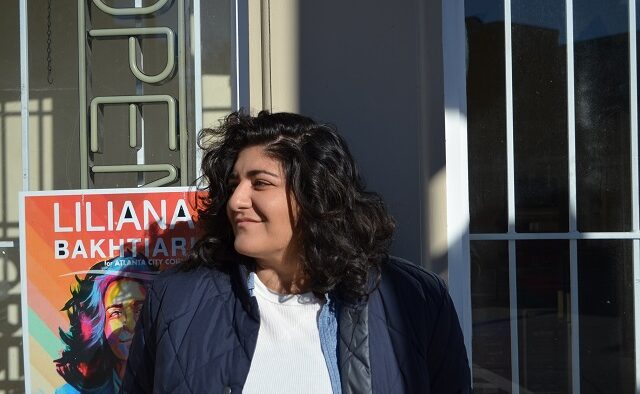 Liliana Bakhtiari is known for being the first queer, Muslim person to be elected in Georgia. She was the first in the country to ever run for office during her first campaign for council in 2017. (Jasmine Robinson/WABE)
Share

Atlanta, GA — On the corner of Auburn Avenue and Jesse Hill Drive, a 65-foot tall mural of Rep. John Lewis towers over onlookers. It now serves as a memorial of the late congressman and a reminder of the rich history of the Sweet Auburn district — one that forever changed the course of civil rights in the United States.

The 65-foot tall John Lewis has watched a new history unfold before him in District 5 of the City of Atlanta.

It’s the district that Councilmember-elect Liliana Bakhtiari will represent as a member of the Atlanta City Council.

“One of the reasons this is so surreal is because it’s me accomplishing this tremendous achievement for myself as my full self, which I thought would never happen,” Bakhtiari says.

Bakhtiari is best known as the first person identifying as both queer and Muslim to be elected in Georgia and the second in the entire country. She identifies as nonbinary and gender fluid and uses “she/her” and “they/them” pronouns.

“You couldn’t have misgendered me if you tried,” she jokes.

As a council member, Bakhtiari has the chance to give back to a community that has given so much to her — and on a larger scale than what she was used to as an organizer.

33-year-old-Bakhtiari has all the eccentricity of someone that’s traveled to exactly 26 different countries. But her story started in Georgia, specifically Gwinnett County, where she grew up surrounded by her family of Iranian immigrants.

She’s a descendant of a long line of what she calls “disruptors.”

He wanted to bring fair, free, democratic elections to the country and almost lost his life multiple times doing so, she says.

“I grew up hearing the stories of families and friends and loved ones lost for standing up against the government,” she says. “I was really young caring about these executions and these tortures, like what happened to people who stood up and expressed or used their voice.”

Before moving to metro Atlanta and owning a pharmacy in Sweet Auburn, her father grew up as a poor farmer outside Tabriz, Iran. Bakhtiari says he decided to go into medicine because he saw so many people he loved die from malpractice or being poor.

“He said he opened up his pharmacy in downtown Atlanta because he saw the same level as the poverty that he saw at home,” she says. “And that’s where he saw people struggling the most.”

The pharmacy has a payment program for people who can’t afford to pay in full. They deliver prescriptions for free.

Her father employed transgender people of color who couldn’t get work elsewhere and made sure people could express their gender. He would treat people on the street that suffered from injuries. And he assisted people with HIV/AIDS who couldn’t pay for their medication.

“My dad was always big on pointing out to me that you always pay it forward in the community because you never know how far you are from rock bottom,” she says. “And so you do to others as you would have done unto you because you don’t know when you will be in their position.”

“My dad is my moral compass at the end of the day,” she says.

Bakhtiari was raised in a traditional Muslim household, and she says that as a child, she struggled with her gender identity. Eventually reaching a breaking point, she moved out of her family’s home at age 18 — a non-traditional move for women in her family. She says she experienced extreme housing instability, financial instability and overall instability from 18 to 23. With no home, she was couch surfing at friends’ dorm rooms and sleeping in her car. During her time attending Georgia State University, she struggled to find the stability needed to be a good student.

And she was embraced by the community during her journey of finding her identity.

“The people that live in this district were the first people to accept me and see me for who I was and helped me come out of the closet and embrace who I was,” Bakhtiari says.

Her familiarity with people in the district brought her to meet Shannon Heath Longino, a native to the East Lake neighborhood of District 5. She was raised by her grandmother, Eva Davis, who played a pivotal role in revitalizing East Lake.

Longino’s work is an extension of her grandmother’s work. She is the senior vice president of Truist in its affordable housing division and the vice-chair of East Lake’s Drew Charter School. Through her work in the neighborhood, she met Bakhtiari two years ago.

“I think Liliana can help us just to bring more value [to] district five and … push a little further for its progress and continue to make it a great place in which it has become,” she says.

She says Bakhtiari’s work aligns with her own and that they share the same vision of serving families and children that are underserved, overlooked and economically disadvantaged.

But, she stresses that Bakhtiari’s identity as a queer and Muslim person has nothing to do with her capabilities and potential for how she will lead the district. Her knowledge and passion alone will take her a long way, she says.

“The district and the city needs to watch out,” Longino says. “[She’s] a great candidate who’s coming to do her work, she’s ready to do the work, and she won’t run away from challenges, and I think that’s what we need.”

Bakhtiari’s identity is an intersection she’s had to navigate her entire life.

“It’s a two-way street because one, I’m humanizing my faith and what the pillars are, and how I was raised and my dad and my family,” she says. “And then on the other side, the traditional Islamic community is coming at me because I’m queer, I have tattoos … I’m not by traditional standards. I don’t fit into that.”

One of Bakhtiari’s goals in office is to “bring humanity back into politics.” She says she does that by being vulnerable and dismissing the “archaic notion” that one has to be perfect to run for office.

The Twitter thread she made on National Coming Out Day is an example of how she’s made herself vulnerable in the public eye. She says it was done in part to educate people on what it’s like to be queer and non-binary but also to show people that she’s still growing into who she is.

“I don’t know that we’ve had anyone who is quite as intersectional in identity as Liliana is, you know, being gender fluid, being queer, being Iranian American, being Muslim, and coming from building herself up from nothing,” says her partner of nine years, Kris Brown.

Brown fell into the role as Bakhtiari’s impromptu campaign manager during her first run for office in 2017 and volunteered again on this year’s campaign.

Now that she’s in office, they’ve noticed people are focusing on the bigger, national conversation of Islamophobia and homophobia in government. But, Brown says, they were never focused on Bakhtiari’s identity and the history that would be made.

Over the years, Brown has seen her transformation from a grassroots organizer to an elected official.

“To see that growth over the last nine years and how much she’s just like the boots on the ground, like getting stuff done. You don’t see that a lot in your politicians. You see that in the organizers, obviously. So I think that that’s a voice we haven’t had on council really is the organizer voice, so I’m excited for that.”

Bakhtiari has been active in politics through activism and organizing since her college days. She’s worked with countless non-profit organizations in Atlanta and abroad.

As a freshman at Georgia State, she immediately got involved in local and international policy work. She started a non-governmental organization with her classmates, drawing attention to a long list of human rights-related crises.

In her 20s, she traveled around the world aiding people living in war zones, refugee camps, extreme poverty and isolation, among other things.

“It’s made me a much more effective organizer, made me far more effective at understanding issues that I did not spend college gaining expertise in,” she says.

As a council member, she says she’ll be able to impact multiple lives rather than the “incremental” changes that come with non-profit work.

“Legislation is how you get to the root cause of issues. It’s how you impact thousands of lives at a time. It’s how you make long-standing change,” she says.

To meet the needs of people in her district, she plans to establish constituent services in her office and have a year-round field program to keep a pulse on the happenings in the communities.

Another large task on her to-do list is to create a neighborhood-by-neighborhood master plan with the ultimate goal of restoring trust between neighborhoods and the government when it comes to money.

And naturally, she will be advocating for LGBTQ+ and Muslim individuals. She plans to address Islamophobia and xenophobia in communities.

Bakhtiari says she forgets about the historical feat that her identity and election have forged, but she recognizes that it’s important to the growing community of LGBTQ Muslim individuals.

“I get to be unapologetically myself,” she says. “And that’s the biggest dream come true. I get to navigate the world as me, talking about how things impact this intersection and getting to knock down the gate that has prevented other people like me from running.”

But in the meantime, she is still trying to get used to being referred to as councilmember-elect.