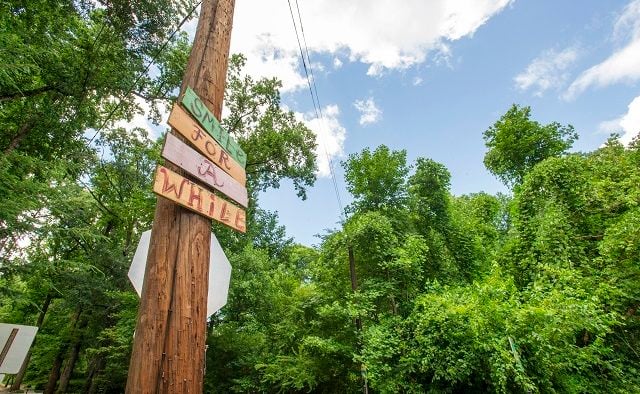 Decatur, GA — The Decatur City Commission on Jan. 18 unanimously approved the revised tree ordinance after a lengthy public hearing. During the hearing, about 25 people urged the board to adopt the amended tree ordinance. The updated tree ordinance will go into effect in about two months.

Planning Commission Chair Harold Buckley, Jr. briefly mentioned allowing for a one tree exemption to potentially allow a homeowner to remove one tree every 18 months, similar to the previous ordinance which allowed a property owner to remove three trees in an 18-month period. Buckley, Jr. said that removing three trees in that timeframe was a little excessive, according to the minutes of the Planning Commission meeting.

This was not proposed as an amendment to the ordinance and was not recommended by city staff. The City Commission also did not discuss this type of exemption. Members of the public urged the commission to pass the ordinance as it was written and not add any exemptions, such as allowing for one tree to be removed in an 18-month period.

“We have been losing trees for a long time,” resident Ash Miller said. “Thankfully, in 2012 our city set a goal to add approximately 150 acres of trees by 2037.”

Miller added that the city has not met that goal and has lost tree canopy over the years.

“Since 2013, we have lost 58 acres of canopy and added 118 acres of impervious surface,” Miller said, stating the data came from the city’s tree canopy study. “So this means, we’re at least 200 acres behind our canopy goal, probably more because that data only goes to 2019.”

He added that the city needs this tree ordinance in order to start making progress on its goals. The one tree exemption was also suggested on Facebook, and it would undermine the measures in the ordinance, Miller said.

“Your first tree taken down would apparently be free in some fashion without replanting, without conservation. It’s not really clear,” Miller said. “With this broad of a loophole, our best trees are going to fall into it. We wouldn’t have much of a tree ordinance at all, and we certainly are not going to add to our canopy by regulating a small fraction of our trees.”

Some questions and concerns still linger about the canopy loss fee, how it can be assessed equitably, and how to implement the recommendations from the Better Together Advisory Board. There was some debate among the commissioners about leaving the fee in the ordinance or taking it out temporarily.

The canopy loss fee was retained in the ordinance and the administrative standards were adjusted so the fee is calculated based on five years instead of 30 years. The city will collect data over the next year or so to analyze the cost of the fee and how it impacts residents. As the ordinance is implemented, the city will also consider how to implement the recommendations of the Better Together Advisory Board.

The Better Together Advisory Board discussed the tree ordinance during its meeting on Jan. 11. The board recommended that the City Commission retain the proposed canopy loss fee under the condition that an equity assessment would be conducted after 12 months and the fee would be reassessed accordingly, Assistant City Manager Linda Harris wrote in a memo.

The Better Together Advisory Board also recommended that a means test structure be created and applied for a hardship exemption to the canopy loss fee; the city offer a payment plan option for the imposed canopy loss fee if needed; and that the city have a communications plan designed to explain the exemptions and how property owners can access them.

The canopy loss fee was created by City Arborist Kay Evanovich as a way to try to compensate for the loss of community benefit when a tree is removed, Saxon told Decaturish.

“It’s getting people to realize what you’re cutting down, what you’re doing away with,” Evanovich said. “I know it costs a lot of money to take down a tree, but you have to think beyond that. What are the benefits that are being lost that we all benefit from? That’s where the canopy loss fee idea was created.”

Under the ordinance, “a canopy loss fee shall be paid to the tree bank by the property owner for any protected tree that is removed.”

“The canopy loss fee is a fee that estimates the benefits lost to the community by removal of a tree. The fee is based on the amount of yearly benefit lost per tree per year, and is determined by using the National Tree Benefit calculator and multiplying the annual benefit for 30 years,” Saxon previously told Decaturish.

The City Commission changed this to calculate the yearly benefit lost per tree per year and multiplied by the annual benefit of five years, instead of 30 years.

The intent of the tree ordinance is to encourage the conservation of existing trees and provide requirements for the protection, maintenance, renewal and increase in the tree canopy in the city, Decaturish previously reported.

The ordinance, however, is triggered and applicable when someone applies for a land disturbance or tree removal permit. The ordinance is also triggered when impervious area is increased on any property.

The City Commission charged the staff to begin looking at revisions to the tree ordinance over two years ago. They asked city staff to especially consider adding protections for trees of significant value, plan for trees as a priority, consider ways to limit site disturbance and grading on properties, limit canopy requirements to on-site trees, improve boundary tree protections and increase the minimum amount of canopy to be conserved, Saxon said.

The city will also seek to hire an additional arborist to help implement and enforce the ordinance.

One change to the ordinance includes a requirement of property owners to submit a tree removal permit to remove untreatably diseased, dead or hazardous trees, which could previously be removed with a tree information permit. A permit fee will not be charged to remove these trees. Discretionary tree removal, which is removing three protected trees in an 18-month period, is no longer allowed.

The ordinance prohibits property owners from removing trees that are in fair or better condition.

“You’re allowed to remove trees that are hazardous, dead or diseased. Under the proposed ordinance, you would need a tree removal permit, and you would have to plant back so that there’s no net loss of tree canopy,” Deputy City Manager Hugh Saxon said. “Or you would be able to remove trees with a tree conservation plan when you have applied for a land disturbance permit or you are increasing impervious area on your property. That’s for single-family dwellings.”

Residential properties will have to maintain a minimum of 60% tree canopy and would be required to conserve 75% of existing fair or better rated trees when a land disturbance permit is required or where impervious area is increased.

Commercial, high-density residential and institutional properties would have to reach at least 45% canopy coverage and would have to conserve 50% of existing fair or better rated trees when a land disturbance permit is required or where impervious area is increased. For commercial properties that have less than 45% canopy coverage when applying for a land disturbance permit, the property owner must apply for alternative compliance.

A payment to the tree bank can only be made once those other options are exhausted or prove to be infeasible for all property owners, whether on residential or commercial sites.

The canopy loss fee would also go into the tree bank. Commissioner Lesa Mayer suggested using the tree bank funds to help low-income residents pay for the cost of removing a dead, diseased or hazardous tree and the cost of replanting a tree.

City staff believed that tree bank funds could not be used for tree removal, but City Manager Andrea Arnold said the city could make sure there are funds in the budget to help residents with tree related issues on a case-by-case basis.

If a homeowner can only afford to remove a dead, diseased or hazardous tree and cannot afford to plant a tree, Evanovich said residents could participate in the city’s front yard tree program, they could get a free tree from the city on Arbor Day and the city could get grants for a true hardship.

The tree canopy goal was also increased from 60% to 65% for the city.

The ordinance additionally now requires a pre-permit conference with the city arborist before any construction activity taking place.