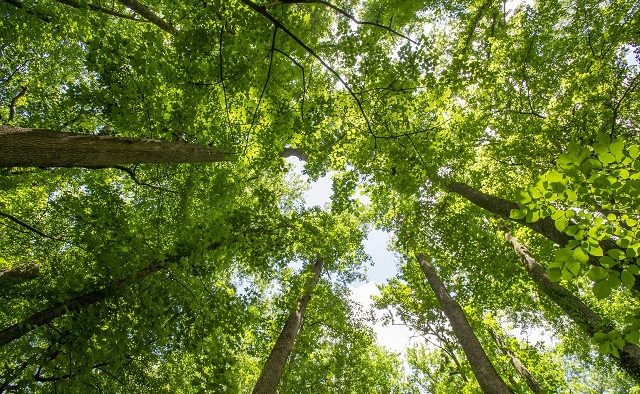 Tree canopy along the PATH Trail at Green Street in Decatur. Photo by Dean Hesse.
Share

Decatur, GA — At its meeting Tuesday, the Decatur Planning Commission voted against recommending approval of updates to the city’s tree ordinance, citing discomfort with provisions they felt would disproportionately harm individual homeowners in the city.

“It’s just too much,” Planning Commission Co-Chair Michael Travis said during discussion of the proposed measure. “It’s like throwing the kitchen sink and the pantry into this ordinance when we could take the existing ordinance and make a realistic attainable goal.”

A key sticking point was the proposed elimination of the ability of property owners to remove up to three healthy trees on their property within an 18-month period without requiring city approval beyond a tree information permit, as is allowed under Decatur’s current tree conservation ordinance.

The proposed new ordinance would require city approval for removal of any tree with greater than six-inch diameter, as well as require the owner to plant replacement trees or pay into the tree bank if the city agrees.

For example, a homeowner who wanted to have a healthy tree removed would be required to ensure that they replanted another tree or trees to keep the tree canopy on their individual property at 60 percent of the land area. Smaller replacement trees would be credited at only a percentage of their potential canopy when mature, not as a one-to-one replacement.

Additionally, property owners would be required to preserve at least 75 percent of the healthy trees on their property when making any changes to their property.

Residents would still be allowed to remove any tree deemed to be diseased or in poor condition or which posed a risk of failure that would endanger people or property, but this would need to be verified by the city arborist.

The multiple layers of requirements would present an onerous burden on the property owner, particularly for lower income households, some commissioners felt.

“I agree the previous [tree canopy] goals were not being achieved,” said commission member Greg Chilik. “The lack of progress in reaching our goals is not due to established homeowners holding us back. It has been the commercial developments and rebuilds on residential property. Residential property owners are the best stewards of trees on their sites and always have been. We would be taking away a lot of their property rights because of a problem caused largely by other parties.”

Deputy City Manager Hugh Saxon, responding to questions from commissioners, said that homeowners would still be able to apply for a variance from the ordinance requirements through the city’s Zoning Board of Appeals.

“There is a community value to the preservation of the tree canopy,” Saxon said. “One of the goals [of the tree canopy conservation ordinance] is to reduce the impact of development on the tree canopy. We already place other limits on what property owners can do with their property for a number of reasons in order to benefit the community.”

Public comments at the meeting were split between those urging the commission to approve the proposed ordinance as written and those urging amendments to allow for more individual discretion for property owners. But both sides seemed in agreement that stricter standards were necessary to stop clear-cutting of trees for new construction and residential teardowns and rebuilding.

Proponents of eliminating the ability of homeowners to take down trees at will pointed out that most of Decatur’s remaining tree canopy exists in single-family residential areas, and significantly limiting the removal of healthy trees will be essential if the city wants to increase its tree canopy.

Decatur attorney Ash Miller, who worked with the city’s Environmental Sustainability Board to draft the new tree ordinance, said creating an exemption allowing homeowners discretion to remove healthy trees would gut the new ordinance because it would also remove the subsequent requirements to plant replacement trees or conserve the remaining tree canopy.

“Data obtained from the city on tree removal permits issued over the past seven years shows that most trees removed would fall under this exemption. Even the most conservative version of such an exemption–allowing 1 tree every seven years even–would result in the same number of removals,” Miller said. “Creating this kind of exemption would completely undermine the purpose of this ordinance.”

Supporters of the new ordinance emphasized that the city’s goal should be to expand its tree canopy, not just ensure that it doesn’t lose ground.

“You need to increase the canopy, not just maintain it,” added Aviva Vuvuzuela, who gave a work address along Clairemont Avenue. “As our population grows, we will need more oxygen, we will see increased pollution, which trees can help with.”

Addressing a commissioner’s comment that homeowners would not be able to take down a tree to construct a playspace for their children or plant flowers in the sun, Vuvuzela urged city residents to shift their perspective.

Critics of the proposed measures said that it created an unfair and unnecessary burden on small, individual property owners when most of the large-scale tree removal is the result of new construction projects.

“Please don’t take a ‘one size fits all’ approach with respect to trees,” wrote Winnona Drive resident Charles Bonner in an email to commissioners. “We should be planting trees to bring the surrounding tree canopy above the threshold. But long-time homeowners should not be penalized. We are not the problem. If you’re flipping it to a developer – sure, let’s restrict that. But if you are going nowhere and want to protect your house or build a 4 x 8 garden shed, you should not have to pay more in fees and permitting than the cost of the work itself. Big tree work is already not cheap. People don’t do it recreationally.”

Commission member Rachel Cogburn pointed out that there are frequent situations where homeowners are worried that a tree will come down on their house or their neighbor’s house in a storm, but the tree is healthy.

“This seems to create a situation where it increases the costs of home ownership, which is already very, very expensive in Decatur,” Cogburn said. “Even if you are allowed to take a tree down, but still pay into a tree bank, that is a much higher cost going into removing that tree. That is very cost prohibitive for most households.”

During the planning commissioners’ discussion, members seemed divided over whether to recommend denial of the requested changes or proposing specific amendments to the City Commission for consideration.

Co-Chair Michael Travis made a motion to recommend denial of the ordinance in its current form, with the commission making recommendations for amendments. The motion passed 4-2, with Chair Harold Buckley and Commissioner Lori Leland-Kirk voting no. Commissioner Todd Ohlandt was absent.

During the meeting, both Buckley and Kirk indicated that they had issues with the proposed ordinance, but would prefer to recommend approval with amendments rather than denial.

Consideration of the ordinance now moves to the Decatur City Commission, which can either accept the Planning Commission recommendation for denial or approve the draft ordinance despite it.

More information about the city’s tree conservation ordinance and the current draft of the updated ordinance can be found on the city’s website here.