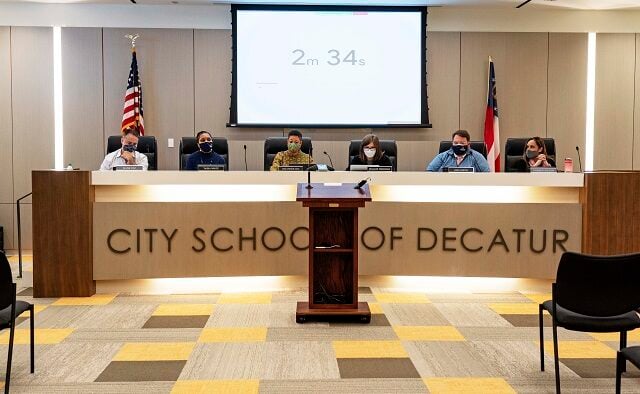 The City Schools of Decatur School Board listens to online public comment during its regular meeting on Tuesday, Jan. 11, 2022. The meeting was held both in person and virtually through Zoom. Photo by Dean Hesse.
Share

Decatur, GA — The Decatur School Board, at its Jan. 11 meeting, began discussing conducting a search for the next superintendent.

“The board feels that we owe the community a search for superintendent, and we hope that Dr. Fehrman will submit her name for consideration,” newly selected School Board Chair Jana Johnson-Davis said. “The Georgia School Board Association has agreed to come to the board’s next work session on Jan. 25 to give a presentation on how they conduct superintendent searches.”

On Jan. 19, the School Board announced it had agreed to a one-year contract extension with Fehrman to give the district more time to conduct a search.

James Herndon, the new board vice chair, said the board is in agreement that they hope Fehrman adds her name for consideration.

“The board feels obligated to do a search for its Superintendent,” Herndon told Decaturish. “The search is not a reflection of the job done by Dr Fehrman, but motivated by an obligation the board feels it has to our community.”

Board member Tasha White encouraged the community and district staff to share their thoughts on the superintendent search and what they are looking for in a superintendent. 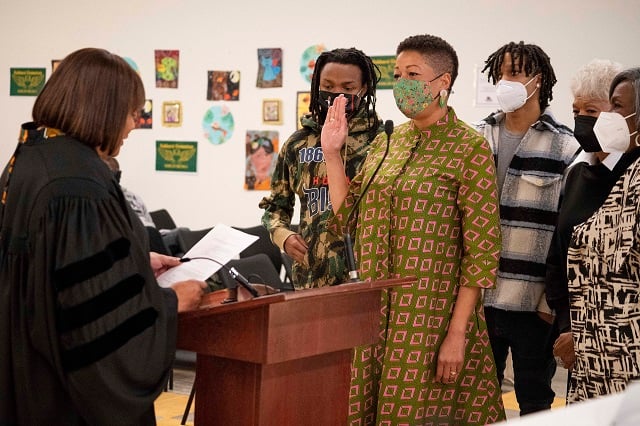 City Schools of Decatur School Board member Jana Johnson-Davis is sworn in by the Honorable Rhathelia Stroud, DeKalb County Misdemeanor Mental Health Court and Chief Judge for the city of Decatur during the boards regular meeting on Tuesday, Jan. 11, 2022. Photo by Dean Hesse. 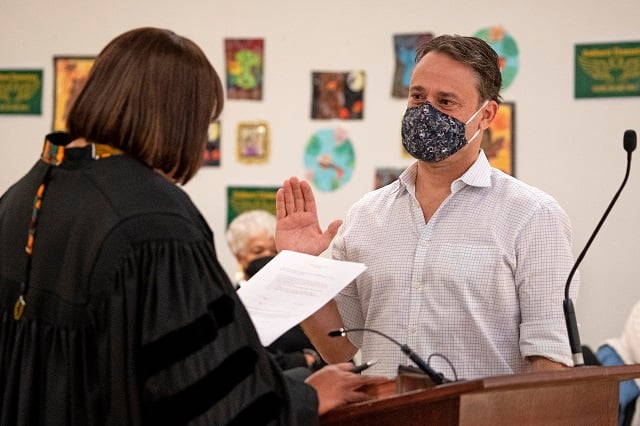 City Schools of Decatur School Board member Hans Utz is sworn in by the Honorable Rhathelia Stroud, DeKalb County Misdemeanor Mental Health Court and Chief Judge for the city of Decatur during the boards regular meeting on Tuesday, Jan. 11, 2022. Photo by Dean Hesse. 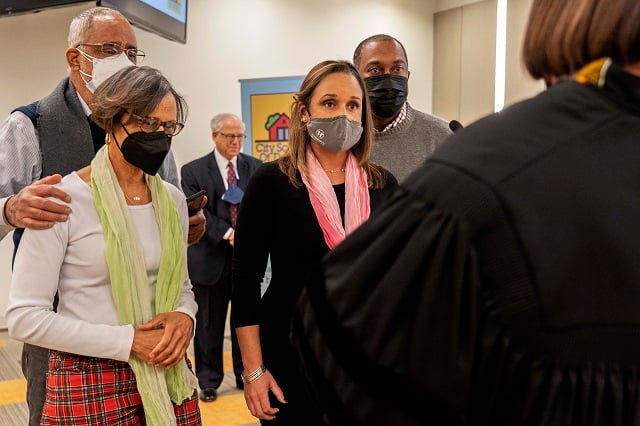 With family members by her side, City Schools of Decatur School Board member Dr. Carmen Sulton is sworn in by the Honorable Rhathelia Stroud, DeKalb County Misdemeanor Mental Health Court and Chief Judge for the city of Decatur during the boards regular meeting on Tuesday, Jan. 11, 2022. Photo by Dean Hesse.

— The School Board additionally discussed the school district’s fiscal year 2022 budget and calendar. The board began discussing the FY22 budget amendment and the 2023 budget priorities in November. CSD’s current fiscal year, 2022, ends on June 30 and fiscal year 2023 begins on July 1. The next budget will need to be approved by July 1.

Local sources of revenue are the largest source for the district, and property taxes account for most of the local revenue. Property taxes generate an average of 52% of CSD’s revenue. The district anticipates collecting about $45.5 million in property tax revenue in the current fiscal year.

The millage rate increased from 20.25 mills to 21 mills for the current fiscal year, which brought in an additional $1.6 million in revenue. The tax digest has steadily increased for the last three years, CSD Chief Financial Officer Lonita Broome said.

If the tentative millage rate for the next fiscal year stays at 21 mills, the digest for current real and personal property is anticipated to increase by about 8% in fiscal year 2023.

The second-largest funding source comes from the state. State funding through the quality basic education formula make up 40% of the district’s revenue. One of the main factors that determines the amount of QBE funding the school system receives is the full-time equivalent, which is based on enrollment and education services provided.

“Since 2020, the state has deducted revenue from austerity cuts. This year we will see a reduction of approximately $1.3 million in austerity cuts,” Broome said. “In addition to austerity cuts, QBE earned revenue is also reduced by the local five mill share.”

The local five mill share is what every school system is expected to contribute to a local share of revenue, which would be generated by five mills of the property taxes. The state automatically deducts this amount when allocating funding.

“Revenue is anticipated to decrease in fiscal year 2022 also primarily due to austerity reductions and an increase in the five mill share,” Broome previously said.

The largest expenditure for CSD is goes toward salaries and benefits for staff. This budget item makes up 86% of the district’s expenditures and has increased since 2019. The current expense is about $72.6 million.

“Salary and fringe benefits have increased at a minimum of 11% since 2019,” Broome said at the Nov. 30 work session. “Some of the factors that have contributed to the increase include staff increases and raises for each year and opening Talley Street in [2019].”

Salaries and benefits also increased in the last fiscal year as the salary scales were adjusted to make City Schools of Decatur more competitive in the metro Atlanta region.

“The district spends a little more in instruction [salaries and benefits] than the average school district, but overall the district’s spending trends are in line with the state average,” Broome said.

Typically, the largest areas of spending are professional services, supplies and materials, technology supply, software and equipment, repairs and maintenance. The total expenditures for FY22 is about $83.9 million.

The district is currently in the planning phase for the fiscal year 2023 budget and is set to prepare the budget in February. The School Board is scheduled to tentatively approve the FY23 budget in April and vote on the final approval of the budget in May.