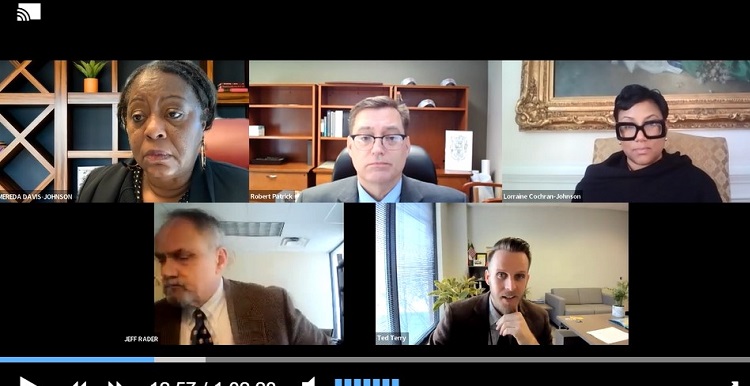 Terry’s proposal is to amend the county’s administrative regulations to exclude marijuana from pre-employment testing for jobs that are not safety sensitive. Terry said this would apply to about 2,000 of 6,000 positions within county government. Terry said with marijuana legalization becoming the norm in much of the country and employers having a tough time finding qualified applicants, changing the policy could attract workers who wouldn’t apply because of the drug test.

“This is just part of the war on drugs,” Terry said. “Drug testing for employment is a fundamental War on Drugs failed policy. We need to change it to adapt to the changing cultural and legal policies around marijuana.”

He said currently, anyone who applies to DeKalb County who fails a drug test is barred from reapplying for two years.

In a Twitter post, Terry accused Johnson — who chairs the county’s Employee Relations and Public Safety Committee — of killing his proposal in her committee.

Johnson publicly responded, stating, “Commissioner [Terry], I appreciate your tweet. However, we disagree on cannabis vs. marijuana use. I would hope that in the future we can agree to disagree on this and other matters which come before the Commission without name calling and being judgmental. Yours in service!”

During the Jan. 18 committee meeting, the board briefly considered Terry’s proposal.

Commissioner Jeff Rader recommended a deferral to gather more input on the idea, but he could not get a second from the three-member committee, so the motion failed.

Johnson made it clear she’s against the policy change.

“Marijuana less than an ounce is still a crime in Georgia,” she said. “Of course, we have constantly for the past three years wanted to change that over to an ordinance, so it would not be on the record of young people and older people that was caught with marijuana less than an ounce. … I stated my position early on that I think we have an absolute responsibility to determine whether one is utilizing illegal drugs before we hire them.”

She said the county is not intruding on anyone’s rights because they do not have to apply for positions at the county if they want to avoid taking a drug test for marijuana.

“I feel that the government would continue to be responsible with that drug testing in place and of course if it was not and someone was injured, what type of liability would the county have? So, you know, I’ve said from the beginning I feel we should keep it in place, but I feel it’s a board vote,” she said before asking for motions. “With that, I cannot support it right now.”

When the motion failed, Terry complained that he tried to work through the concerns about his proposal with committee members, but no one would meet with him.

“I’m disappointed because this was a good faith effort to address a policy concern, and quite frankly, madam chair, you didn’t even give it much time and attention,” Terry said. “You had one meeting about it and then now it’s dying. I’m proposing alternative directions to go based on y’all’s feedback, and you’re just sort of killing it right there. I tried to take the approach that we would work on this together, but none of y’all would meet with me about any of these things, so we could only talk about it on a dang committee meeting.I’m a little frustrated because there’s not good faith on this board to work through some of these issues, and you’re cutting it off right here at the committee level. You didn’t give me a chance.”

Johnson cut him off and said the committee had to move on to other issues.

Terry said since the proposal wasn’t technically voted down, it will appear on a future county commission agenda with no committee recommendation.

“I think we should work on this because it’s an important policy issue, and the commissioners didn’t want to keep working on it,” he said.

He also accused fellow commissioners of being misinformed about the issue.

“Some of our commissioners say things that aren’t based in reality,” Terry said.