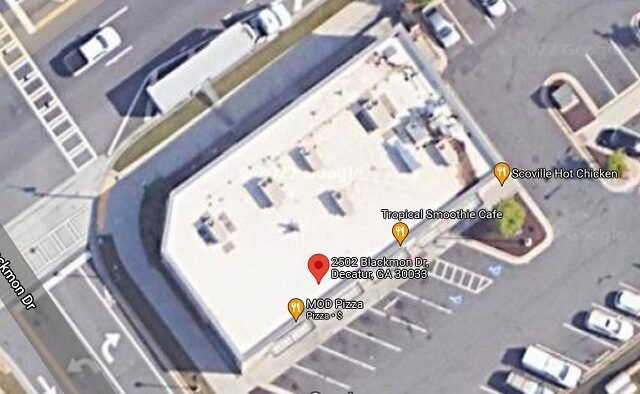 The location of the attempted robbery that occurred on Jan. 28. Image obtained via Google Maps
Share

Greater Decatur, GA — DeKalb County Police on Monday identified a robbery suspect who was shot and killed while trying to rob a pizza restaurant in greater Decatur.

They also confirmed the person who shot him, a customer, won’t be facing any charges.

DeKalb County Police responded to 2502 Blackmon Drive around 10 p.m. on Jan. 28 in response to an armed robbery. The address is for MOD Pizza, and social media postings indicated that’s where the incident occurred. The social media posting said the person who shot the suspect was a customer of the restaurant, and police confirmed it on Jan. 31.

“When they arrived, they found the male suspect suffering from gunshot wounds across the street,” a spokesperson for the Police Department said. “Investigators believe the suspect was shot by someone inside the location after the suspect attempted to [rob] it. The suspect was transported to a local hospital, where he later died.”

The suspect’s name is Ontario Davis, 24, a spokesperson for the Police Department said. He was shot by a male customer who will not be charged.

Decaturish has requested the police report in connection to this incident. A spokesperson for MOD Pizza declined to comment.