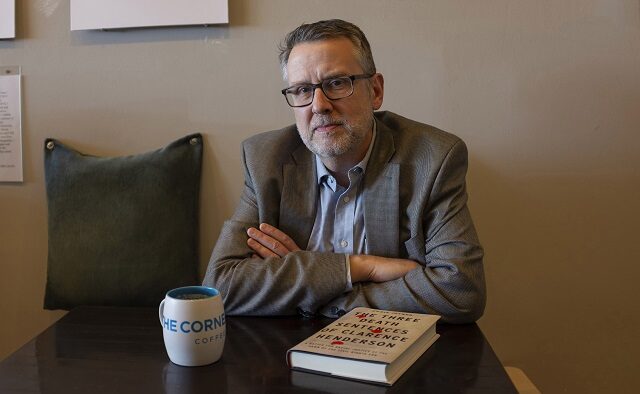 Atlanta, GA — Local author and journalist Chris Joyner has released a new book, “The Three Death Sentences of Clarence Henderson,” that shares the story of a Black sharecropper who was wrongfully accused and sentenced to die for a murder he didn’t commit.

In the late 1990s, Joyner became a journalist, and his first job was a general assignment reporter at The Times-Georgian in Carrollton, Georgia. He attended the University of West Georgia to earn his undergraduate degree. His father attended the same university 40 years earlier, during World War II.

When Joyner began working at The Times-Georgian, his father gave him the tip about a man named Buddy Stevens, who was murdered in 1948 in Carrollton. Joyner’s father knew Stevens.

“Stevens was a townie and dad was from Atlanta,” Joyner said. “They didn’t know each other very well but were running in sort of the same circles. He said, ‘I don’t think they ever figured out who killed Buddy Stevens.'”

Joyner looked at the bound volumes of what was then The Georgian and began digging into the case.

In Carrollton at the time, a serial rapist had been in the area and was stalking couples. The stalker would scare off the man and sexually assault the woman. In Stevens’ case, he was a little older and had just come back from a tour in the Army. He was a military police officer in Korea in the immediate aftermath of World War II.

“He didn’t run. In fact, he tried to protect, and did protect his date, but it cost him his life,” Joyner said. “I found that interesting, but more than that, the community’s reaction was fascinating to me. It was a terribly traumatic event for that community, and more so because the police were convinced that the attacker was Black, even though he was masked and no one ever saw him. The girl involved in the Buddy Stevens murder, his date, told police that she thought he sounded Black.”

The police went on a manhunt in which every Black man in West Georgia was a suspect. Eventually, they landed on Clarence Henderson, a Black sharecropper from the community. He had no connection to Stevens, and he was never charged with any of the other attacks.

There was very little evidence against Henderson and most of it concerned the alleged murder weapon, a silver Smith & Wesson .38 revolver with a black grip. The gun was sold, pawned and loaned to many people, but Henderson was among the many owners of the weapon. It was unknown who actually possessed the gun when the murder occurred, according to the Atlanta Journal-Constitution.

“How that manhunt and then the trials played out became really, really interesting to me,” Joyner said. “In part because it’s just a great story of a crime and courtroom procedure and an unjust verdict time and again. But also because it said a lot about where we were as a country in the years following World War II.”

Henderson was accused of murdering Stevens and was sentenced to the electric chair three different times. He was initially assigned court-appointed attorneys from the local bar in Carrollton.

“That initial trial took place in one day, and the defense offered no testimony other than Clarence’s unsworn statement. He was sentenced that day to the electric chair,” Joyner said. “It was after that, that the NAACP, but also the American Communist Party, got involved in trying to come up with grounds for an appeal, a new trial and a defense fund for Clarence Henderson.”

Two members of the African American legal community in Atlanta become his attorneys. They then hired a crusading white attorney, Dan Duke, to be the person out in front of the defense, Joyner said. 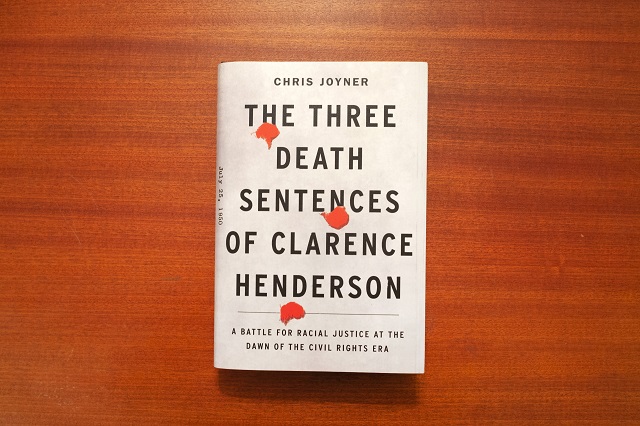 “The Three Death Sentences of Clarence Henderson: A Battle for Racial Justice at the Dawn of the Civil Rights Era” by Chris Joyner. Photo by Dean Hesse.

The book also describes what was going on in the country at the time.

“More than that, it’s about what was happening in America in the decade following World War II,” Joyner said. “It’s politics, the development of the Civil Rights Movement…the spread of the suburbs following World War II, and boundless optimism but also the incredible paranoia that was part of that period, and how that all factored in to what happened in Carrollton over a period of about four years.”

The themes that came out of post-World War II American defined the American century, which saw competing ideas of optimism and fear of democratic institutions being in peril play out.

“In the 1950s, there was a real concern that the international communist conspiracy was going to doom the country as we know it, change it, weaken its institutions, corrupt its politics from within,” Joyner said. “In fact, the Communists were involved in defending Clarence Henderson early on. Largely in a way to make itself more appealing to African-Americans in the South, where they saw a real opportunity to recruit. The NAACP gets involved and really pulls the case from the Communists.”

During that time, the NAACP was concerned about being pulled in with the Communists and tried to separate the organization from them as their goals were not the same.

“There’s that struggle that’s going on between social justice and political upheaval,” Joyner said. “There’s a real social and cultural move forward during this period after World War II, and a reaction from the white community that is spawned from that attempt to push us forward in terms of our civil rights and social justice issues.”

The country is seeing some of that today, he added.

“We’re in a period right now where there is a great social and cultural leap forward and there’s a reactive movement to that, an attempt to claw us back from that,” Joyner said. “I think in that way we have a lot in common with this period. Our hopes and our paranoia are at war with each other. It’s a very, very live issue today how the justice system works, or doesn’t work, for Black men. That’s the case was the case then, and it remains the case now.”

While the specifics may have changed since 1948, many of the same concerns still remain. Joyner added that Henderson’s story speaks to that.

He also hopes that people gain a new understanding of how complicated the late 1940s and early 1950s were. The period is thought of as being really optimistic and energetic as the U.S. was coming out of the depression and the war and soldiers were coming home and starting families. It was also the beginning of the Baby Boom.

But for the people living through this period of history, there was no guarantee on how things would play out.

“There was nothing about that period that suggested they were out of danger,” Joyner said. “That explains to some degree the paranoia that led to the Red Scare. It was a time when African-Americans, many of whom had served in World War II, they came home, and they were determined to win their full citizenship as Americans. That meant [having] the ability to vote and participate in democracy, but also the economic freedoms they would expect to have going forward, the ability to live where they want to and engage in public life. That was a struggle that we continue to see play out. I’d like readers to get an appreciation of how fraught this period was. I think it does say a lot about where we are today.”

Joyner also felt it was important to share the story of some people from Georgia history who he doesn’t want to be forgotten, like Henderson’s defense attorney, Dan Duke.

“He’s a man who could have been in Congress,” Joyner said. “He could have been governor of the state. He was just so far ahead of where the state was in terms of his understanding of what justice truly was. I think he is a real important figure in Georgia history, and he’s not well known. Also, how important the Black legal community was during that period and how much they risked every day just to practice law and seek justice. I’d like for that to be appreciated.”

To learn more about the book and to purchase a copy, click here.