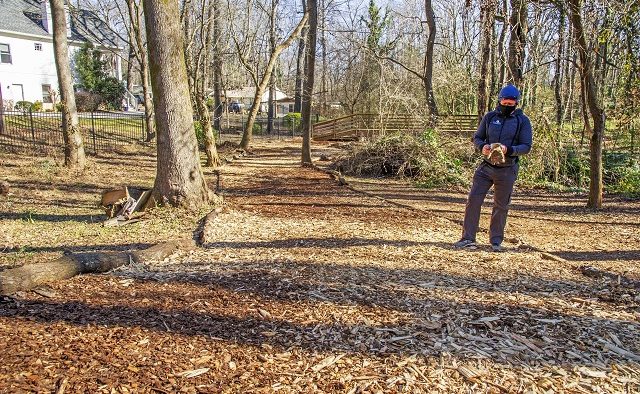 Atlanta, GA — The Atlanta Department of Watershed Management recently damaged parts of Kirkwood Urban Forest and adjacent private properties while repairing a sewer line. The Kirkwood Neighbors Organization has engaged with the department and has walked the site with the city’s parks department and City Councilmember Lilliana Bakhtiari to discuss repairing the damage.

“We’re shooting for basically high-quality remediation of the damage, with some initial stuff done fairly quickly to restabilize the stream embankment and control water runoff and erosion before the spring rains come, because you’re going to lose backyards there,” KNO Environmental Committee Chair Earl Williamson said at the Jan. 10 KNO meeting.

On Jan. 2, Williamson shared a post in the Friends of Kirkwood Urban Forest Facebook group discouraging residents from using the north trail due to significant damage to tree roots, a tree grove, ground cover and plantings.

“Ground cover damage is so extreme that both public and private property owners can expect significant erosion,” he wrote in the post. “The damage is due to Watershed Management repair of a leaking sewer line. While we acknowledge the importance of the repair, the damage is extremely excessive given the scope of the work. A previous repair at the same location by private City contractors with heavier equipment left minimal impact in contrast.”

The city will address remediation of the private properties. The KNO Environmental Committee will take the lead on addressing the damage to the park.

“We’ve already got a plan in place for how it’s going to get fixed at Kirkwood Urban Forest north, what material we’re going to use, that kind of thing. We already know that Watershed is going to fund it,” Williamson said. “As far as the private property piece of it, they’ve already consulted a landscape contractor, but they’re going to need more expertise than just that. They damaged probably between 100 and 150 feet of stream embankment…that needs to be stabilized.”

The KNO also discussed the organization’s 2022 proposed budget. KNO Treasurer Alex Scollon said the board looked at what was possible last year and what they thought would be possible this year based on the COVID-19 surge.

“You’ll see that the revenue is particularly slim this year and really based around the Spring Fling revenues, which is why we’ll have to revisit the budget after Spring Fling to make sure that we get those revenues that we’re expecting,” Scollon said. “The expenses are really based on giving each committee some money to make sure that they can do the projects that they are focused on at the committee level. Then making sure the operations of the organization run appropriately.”

Spring Fling will be held on May 14 and more information will be released soon about sponsoring, signing up as a vendor and Atlanta’s first wing contest, Andrew Feury said. 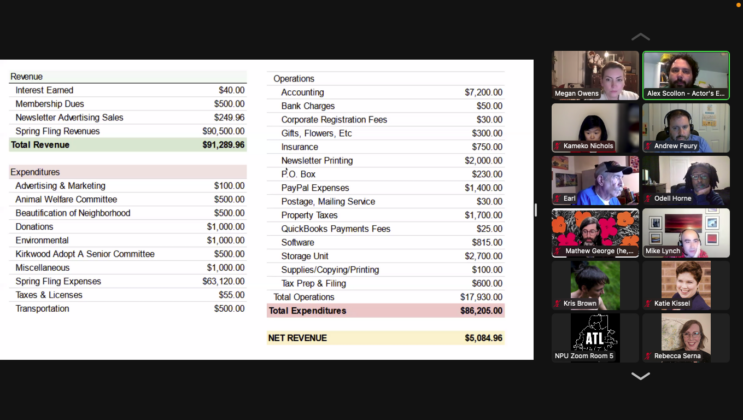 The Kirkwood Neighbors Organization approved one of two votes on the proposed 2022 budget at the Jan. 10 KNO meeting. Photo is a screenshot of the meeting.

— Atlanta Police Sgt. Zoel Murphy reminded the KNO of the clean car campaign amid an uptick of thefts from vehicles. He encouraged residents to park in a well lit area, lock their vehicles and remove any valuables. Murphy additionally suggested residents consider installing a dashboard camera in their vehicles.

— State Sen. Elena Parent gave an overview of issues to watch for as the 2022 legislative session started on Jan. 10.

“We’re sort of expecting that this session will be full of a lot of fraught cultural issues, because we have a lot of individuals who are trying to shore up, in particular, right wing credentials for primaries,” Parent said.

Among the issues to watch are topics related to gun permits and gun control. Gov. Brian Kemp has endorsed a plan to get rid of the need for permits if someone is going to carry a concealed weapon. Parent added, there will likely be bills about banning the teaching of “critical race theory.”

Voting rights will be another issue to watch as well. Some are talking about eliminating drop boxes for absentee ballots, Parent said.