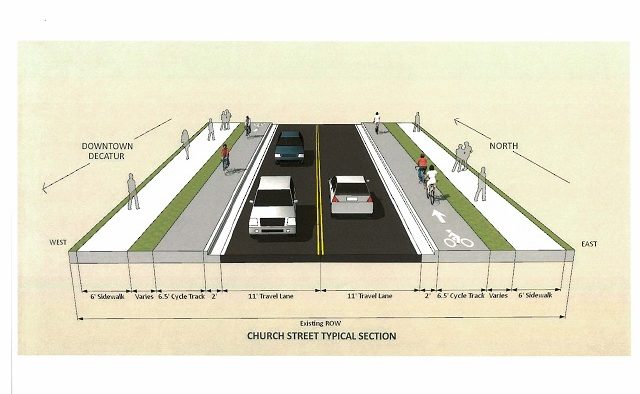 A rendering of the Church Street cycle track. Image obtained via the city of Decatur
Share

In May 2021, the City Commission approved plans to permanently reduce the car traffic lanes on Church Street from four lanes to two lanes from the city limits on the north side to the intersection with Commerce Drive. On each side of Church Street dedicated bike lanes will be added as well as improved sidewalks that will tie in with the pedestrian and cycle-track improvements along Commerce Drive.

The project will also include pedestrian safety improvements at the intersections of Church Street and Commerce Drive, and Commerce and Clairemont Avenue. The city will eliminate the vehicle slip lanes at Clairemont and reduce the crossing distances, making it easier for pedestrians to safely navigate and reducing distractions for drivers.

The reader wanted to know if this would also mean permanently removing parking on Church Street.

“Years ago, when Glenlake Park was renovated, the parking lot for the park was removed and cars were to park on Church Street,” the reader noted. “We have a lot of parking problems already during the summer when the pool is open, and it appears that the parking plan is just to continue to push cars onto Lucerne Street and into Great Lakes.”

The reader said, “We live on Lucerne and parking is about to be a nightmare if all the parking on Church Street is removed.”

Deputy City Manager Hugh Saxon confirmed that most on-street parking will be gone once the cycle track project is completed.

Saxon said the city will direct Glenlake visitors to park on the cemetery drive next to Glenlake Park if on-site parking isn’t available. He said the Decatur Cemetery is located at 299 Bell Street, which is the first intersection on the east side of Church Street south of Glenlake Park. It’s marked with a monument sign for the cemetery. He said after drivers enter the cemetery, there are several drives to the north that lead to the drive adjacent to Glenlake Park.

“This area can provide parking for 30-35 vehicles and is accessible via a short walkway directly to Glenlake,” Saxon said. “There is also a smaller parking lot near the dog park at the end of Norris Street. This information will be communicated to all city tennis teams as well as opposing teams from outside of the city.”

Saxon said the current on-street parking was meant to be temporary and was placed there during the reconstruction of Glenlake Park. He described the parking “as a convenience for park visitors and as a way to help transition Church Street from four lanes to two lanes.”

“Of course, we also expect that some Glenlake patrons will avoid vehicles and make use of the improved bicycle and pedestrian facilities on Church Street when visiting the park,” he said. “If driveways on Lucerne Street are being blocked, we recommend that you call the Decatur Police Department at its non-emergency number, 404-373-6551, for assistance.”

“Work started at the beginning of December at Church Street and Medlock and is proceeding south on the west side of Church Street,” Saxon said. “Weather has been a factor, but we have an excellent contractor who is making steady progress. Of course, all construction of this type is noisy, messy and inconvenient.”

Work is expected to be finished in June 2023.

Cathi Harris and Zoe Seiler contributed to this story.