Decatur, GA — Thirty four town homes could be coming to Oakhurst by June 2025. Parkland Communities has proposed to develop the properties at 614, 618 and 622 East Lake Drive and are seeking to rezone the property to multifamily residential and medium density.

Parkland Communities is working on a similar project in Gwinnett County called Sweetwater Springs. The town homes are stacked on top of each other, so the project would consist of 17 buildings, each with two units.

“What we’ve done is we’ve created a really creative type of town house. It looks like it’s a single town house, but in reality we get two residences out of this one town house,” said Jim Jacobi, president of Parkland Communities, during a community meeting on Jan. 24.

The project in Decatur, however, would be a different elevation than the Sweetwater Springs development.

The town homes are all rear entry and will front onto East Lake Drive. In front of the units, the developers plan to create a community greenspace to act like an extension to Oakhurst Park, which borders the properties. The developer plans to add gravel walkways around the community green and landscape the front areas of the units.

“What we did just like the other units that were fronted onto the town green or town park, that’s what we’re proposing here, is that we’ll have a park, which I’ll build as an extension of the baseball field and the overall Oakhurst Park, but extend it up,” Jacobi said. 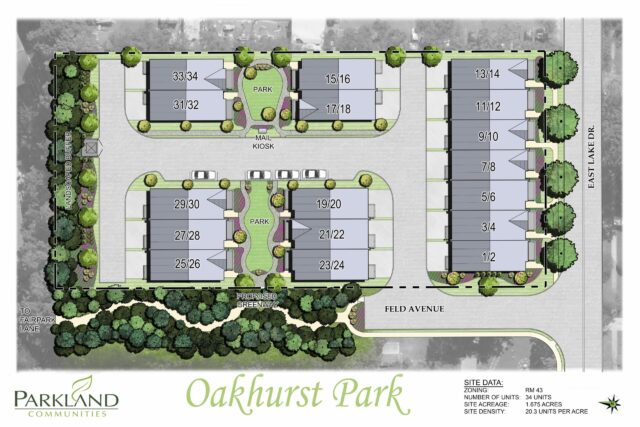 The entrance to the property will be off Feld Avenue. At the end of that road, there’s a sidewalk that is frequently used by pedestrians.

“We are proposing to develop the gravel drive of Feld Avenue into a street. The new street portion will extend up to where the streetlight and Decatur sign is currently located,” Jacobi told Decaturish. “We would like to work with the City to remove the old 4-foot wide sidewalk within Feld Avenue right-of-way and replace it with an 8-foot wide pathway extending to Fairpark Lane.”

He added that the 8-foot sidewalk is not intended to be used for emergency vehicle access.

During a recent input meeting, a resident raised concerns about pedestrian safety and the sidewalk ending where the street begins. Parkland Communities adjusted its site plan to add some landscaping at the end of Feld Avenue where the 8-foot sidewalk would begin and add a sidewalk along Feld Avenue.

Six out of the 34 units will be affordable housing meeting 80% of the area median income, exceeding the city’s inclusionary zoning that 10% of the units would have to affordable, Jacobi said.

Parkland Communities anticipates applying for the zoning change in early February. They are seeking to rezone from R-60, which is single family residential, to RM-43.

“Although, our proposed density is only 20.3 units per acre, we must pursue the RM-43 zoning classification because it is the only classification which allows the use of a stacked flat type of unit,” Jacobi said. “We will have a zoning condition that establishes a maximum of 34 units allowed on the property.”

The RM-43 zoning designation would allow for 72 units on the site, but the developers have capped their density at 34.

“That is why I will request a condition with a maximum number of 34 units,” Jacobi said. “I don’t want anyone thinking that I am doing a bait and switch to get more density than shown.”

The Decatur City Commission recently amended the city’s tree ordinance, which adds new requirements to reach 45% canopy and conserve 50% of existing fair or better rated trees on high-density residential properties in cases where a land disturbance permit is needed, or impervious area is increased. If the RM-43 zoning is approved, the site would be considered high-density residential under the tree ordinance.

The developers met with the city staff recently to discuss the project, and they are currently reviewing the tree ordinance.

Parkland Communities hopes to begin construction of the town homes in October 2024 and finish construction in June 2025.

Correction: An earlier version of this story incorrectly stated the percentages related to tree canopy and conservation. The story has been updated with the correct information.