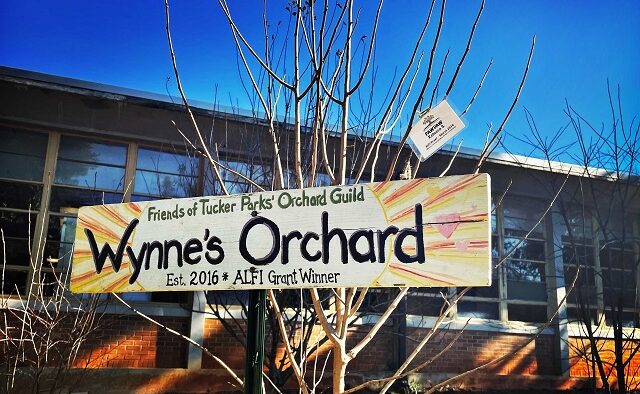 When I reached out to Mike Fillon to set up an internship with the Orchard Guild, it began years of mentorship and experiential ecological education. A massive, thriving world of soil microorganisms, insects, and plant life opened up to me. It became clear that this world was also my world, and that whether or not I understood it, I would be a part of it and it of me. Working in Wynne’s Orchard (and in many orchards, woods, and wildlands since) helped me begin to understand and love that world. Doing so also rooted me deeper (see what I did there?) in the human world, encouraging me to feed my neighbors and classmates at the Rec Center, a space that I really grew up in.

E.O. Wilson, a recently departed renowned evolutionary biologist responsible for many germinal ecological theories, said:
“I will argue that every scrap of biological diversity is priceless, to be learned and cherished, and never to be surrendered without a struggle.”

I will argue the same. I don’t want to make all of this an analytical balancing of cost and value. Above and beyond all else, I have been lucky to help raise eleven individual and irreplaceable trees and bring them into a vast ecosystemic web.  But I understand the practical concerns as well. I’ve spoken about the financial value of Wynne’s Orchard. I’ve also spoken about the expense and logistical difficulty of successful transplant. According to one study, “transplanted trees had ~50% lower rates of leaf photosynthesis and transpiration; ~80% lower root starch content; and ~30% higher loss of xylem conductivity…the prevailing effects on leaf activities suggest a long-term stress unrelated with water or carbon supply.”

The possibility of an eventual rec center renovation has come up a few times. People are reasonably concerned that eventually the building will be replaced and the trees will be even less likely to survive a move then. That would indeed be true. I don’t know when a renovation would happen – two years, five years, ten? As far as I know, there haven’t been public plans or announcements about it yet.

If the rec center needs to be replaced in 5 years, Wynne’s Orchard could produce a significant amount of fruit and provide meaningful recreation and ecological value for the next half decade. In five years, several of the trees will be naturally nearing the end of their productive lives. In the meantime, you could plant saplings this year at the library or another space. Five years from now, the new trees would be seven or eight years old and producing as well as Wynne’s Orchard is now. And during the interim, there would be two beautiful and productive orchards instead of one. So, it seems clearly beneficial to leave Wynne’s Orchard up until (if not through) an eventual renovation, while beginning other orchards in Tucker now. That is, unless the bocce court is the ultimate priority. But the reaction that I’ve seen from Tucker doesn’t seem to indicate that’s the case for many residents.

If we want to maintain greenspaces and a legacy of fruit in Tucker, it makes much more sense to start a new orchard in a different location than to try to move Wynne’s Orchard. Planting young tree saplings elsewhere while leaving Wynne’s Orchard (at least for now) would mean starting elsewhere with trees that had much better survival odds, were custom picked for the space, and would be easier and less expensive to plant.

so pretty, so many,
vanish
in the great, black

packet of time,
in the great, black
packet of ambition,

and the ripeness
of the apple
is its downfall.

The sooner we plant new orchards and the longer we leave the old ones — the more fruit, more leaves, more shade, more growth, for all of us, every year, even as time takes some of that away.