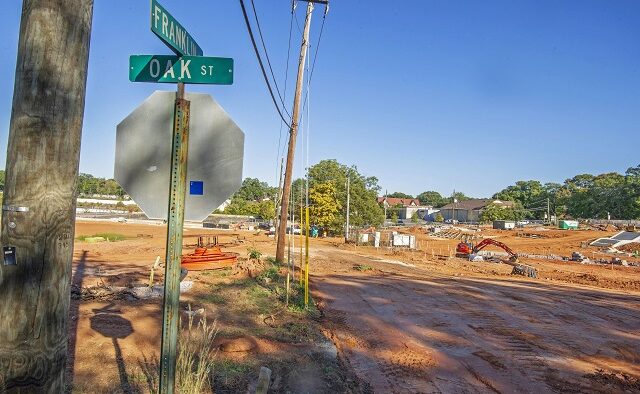 Avondale Estates, GA — The developers working on the Avondale Estates town green presented construction drawings to the City Commission on Jan. 26, and they will move forward with permitting and figuring out the cost per the direction of the board.

The Avondale Estates City Commission broke ground on the town green project on June 30, alongside City Manager Patrick Bryant, Downtown Development Authority Chair Dave Deiters and some of the consultants who have worked on the project along the way. Construction is ongoing and work is anticipated to be completed in the spring.

At the Sept. 22 City Commission meeting, Jerry Miller, founder and principal of Fabric Developers, presented plans for a two-part commercial development. One area will be a multi-use pavilion and parking area. The City Commission has expressed their desire to not allow parking underneath the pavilion, and that change has been made to the design plan.

In November 2021, the City Commission approved a contract with Fabric Developers for an amount not to exceed $92,000 in order to design the pavilion. The city will also amend its current contract with Reeves Young to include construction of the pavilion in an amount not to exceed $850,000. At that meeting, the City Commission told city staff to move forward with pursuing the design concept.

The estimated cost of the pavilion will be about $1.1 million, although the city expects the cost to be less. The amendment, however, is about $850,000 that would be added to the current contract with Reeves Young.

The city plans to dedicate $250,000 of contingency funds to the pavilion. That money is built into the current contract with Reeves Young and is already pledged to the town green project.

The city is still working to determine the exact cost of construction of the pavilion, which will be finalized after no remaining tweaks are made to the design, City Manager Patrick Bryant said.

“However, the development team does anticipate that the construction of the pavilion and multi-use pad will be within budget, that no further amendment to the construction contract need be made,” Bryant said. “Of course, if that is in fact not the case, we would then bring that item back to the board for future consideration.” 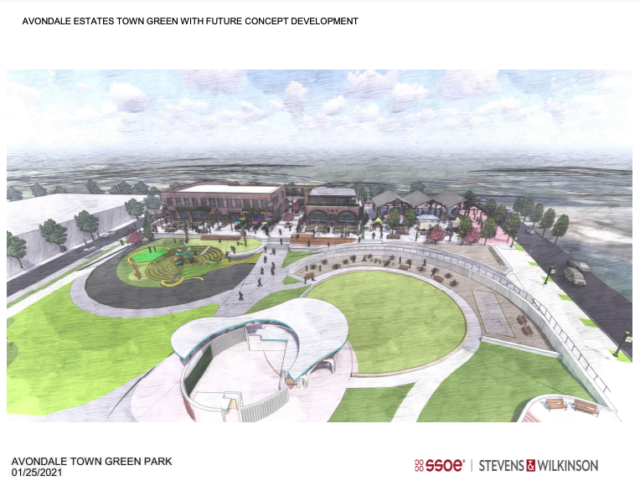 Stevens and Wilkinson presented construction drawings of the market pavilion of the town green project. They also provided an updated rendering of the design. Photo courtesy of the Avondale Estates website.

The multi-use pavilion area could be used for community events, the Avondale Farmers Market, food truck parking or for deliveries.

With the new design, there is a concrete plaza area behind the pavilion that could be used for a variety of things and will be for pedestrians. In each corner of the plaza, there will be a tree wells to provide shade to the area.

The design team from Stevens and Wilkinson added a new path to the town green concept. Originally, they planned to have a path leading from the stairs straight south to North Avondale Road, but a temporary path would now lead patrons to the pavilion area, said Sheri Locke, principal architect of the project with Stevens and Wilkinson.

One change to the design includes curving the park into the patio to intertwine the two aspects and match the curved nature of the town green.

“It also allows for more depth on the park side to gently slope some fairly steep grades, and it did away with an expensive retaining wall that we would have needed otherwise,” Locke said. “There’s going to be beautiful landscaping along here and then on the south and western edges [of the park].”

She added that there will still be space for the grand terrace that was part of concept nine, the first design of the park that Locke designed.

In the initial design, Locke planned for four seat walls along the southern edge of the pavilion, and she has added two more seat walls.

Bill Clark, principal architect at Stevens and Wilkinson, said the last task to complete is working with Reeves Young to get the subcontractors finalized, figure out the final cost and finalize the schedule.

“[It’s] very exciting. We really can’t wait to get this built, if you all are in agreement,” Clark said. “It’s going to be a great addition not only to the town green, but to the whole downtown.”

Mayor Jonathan Elmore was also excited about this part of the project and hopes the city can proceed with the pavilion.

“I think this pavilion’s going to be a great addition to this ensemble,” Elmore said. “Eventually, we’re going to get those buildings built, and we’re going to have a really nice urban space here. I think the pavilion is a very useful structure to have. It’s a great design.”