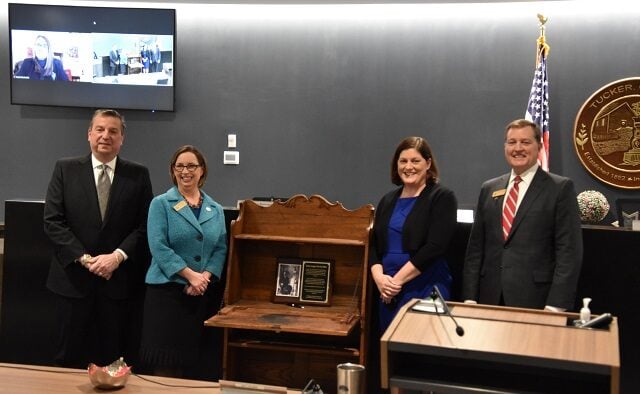 Tucker, GA — Just days before the one-year anniversary of the death of Tucker City Council member Bill Rosenfeld, the mayor and three new council members were sworn into office on Jan. 11. New councilmembers are Roger Orlando for District 1, Post 1, Cara Schroeder for District 2, Post 1 and Alexis Weaver for District 3, Post 1.

The council then appointed Anne Lerner as Mayor Pro Tem to exercise the authority of mayor in case of his absence. Michelle Penkava formerly held the position.

His third term in office, Mayor Frank Auman called the occasion a long time coming as he referred to many new faces on the dais.

Council members unanimously approved a resolution presented by Assistant City Manager John McHenry to revise the Tucker Downtown Development Authority boundary, which has been the same since May 2017. Sixteen parcels in Northlake were added to the DDA boundary, allowing economic development tools to be used by DDA in redevelopment of the area.

City Engineer Ken Hildebrandt presented an easement acquisition plan preceding the installation of sidewalks on the west side of Old Norcross Road from Lawrenceville Highway to Spring Glen Drive. Hildebrandt said the project is about two years from starting. City Council approved a contract for Atlas Consulting not to exceed $100,000 to help negotiate the acquisitions.

City Council also approved the installation of bus stop seating at seven stops along Lawrenceville Highway and E. Ponce de Leon Avenue in the amount of $33,324. The work will be completed by Ligniappe Development Company.

Lerner asked for a long-term solution to keep the Marta bus stops free of trash and debris, asking for a plan that is “safe for bus riders, looks good and is a benefit for our community as a whole.”

Planning and Zoning Director Courtney Smith presented a second read of two Special Land Use Permits (SLUP) at 4114 LaVista Road, a Shell gas station at one of the city’s main gateways. The current signs on the property, which houses a separate oil change business, are not in compliance with Tucker city code. City Council approved the SLUPs, with a condition that signage must be brought into compliance before 24 months.

On Jan. 20, a meeting will be held for the residents and business owners on Rosser Terrace to discuss options for closing the street to thru-traffic. Chick-fil-A has been trying for months to work out a solution at 4435 Hugh Howell Road for its new location.