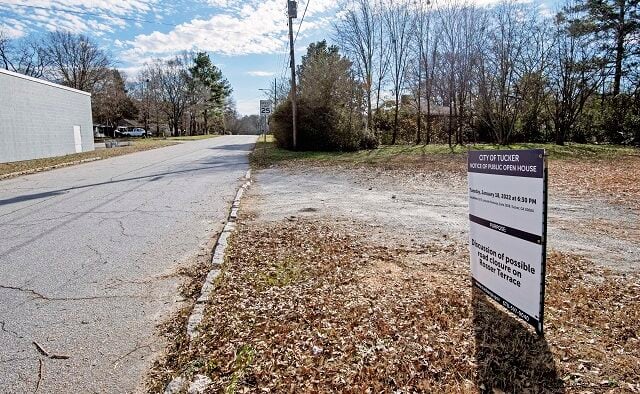 A plan by Chick-fil-A to build a new three-lane drive-thru restaurant in Tucker at 4435 Hugh Howell Road, the former site of Greater Good BBQ, has met resistance from residents of Rosser Terrace. Photo by Dean Hesse.
Share

Tucker, GA — Chick-fil-A returned to Tucker City Council on Jan. 24 during a special called meeting, restarting the process with a first read. The site plan remains the same and so do the concerns about traffic on Rosser Terrace, the residential street beside the potential Chick-fil-A property at 4435 Hugh Howell Road.

The struggle is over a drive thru with capacity for 45 cars. Any restaurant could have already purchased the land and opened, but Tucker requires a Special Land Use Permit (SLUP) for a drive thru.

City staff is recommending denial of two of four variances, and an 18-point list of conditions including landscaping, pedestrian and traffic safety measures.

During the public hearing, Chick-fil-A focused on the benefits of their plan.

“Overall, the site is designed to keep the drive thru located as far away from the residents as possible,” said Jennifer Santelli, Chick-fil-A development supervisor.

Santelli said there is a list of things Chick-fil-A “is willing to do” to improve Rosser Terrace.

“We’ve talked about installing a no right turn sign at our driveway on Rosser Terrace. We have mentioned including a pork chop [to force drivers] to take a left, so that makes it harder to take a right. We’re willing to install a fire access gate to close off Roser Terrace access, and we could work with DeKalb County on speed humps,” she said.

Santelli said Chick-fil-A can’t add sidewalks to Rosser Terrace “based on their current right of way and a variety of other issues.”

Chick-fil-A engineer Bridgette Ganter said there are other uses “less compatible with a residential district” allowed on the DT-2 (downtown corridor) zoned property.

“I just wanted to point out that a bar could go there, or a brewery could go there,” said Ganter. “Courtney [Smith, planning and zoning director] urged the public to look at that. I’m sure you all know what the other proposed uses are – and there are many – but we just wanted to point out that we could walk away from this site and the next applicant could come in and put a brewpub there without any public input.”

Ganter did little to sway residents.

“I’d rather have a restaurant or brewery at the end of the street because it’s not drive-thru traffic. That’s the big difference. When Greater Good BBQ was there, it was not a problem. You don’t have the people cycling in and out, throwing trash, you don’t have people cutting through …” said resident Allison White.

The city did not immediately respond to Tucker Observer’s question about next steps for solving traffic problems on Rosser Terrace.

Councilmember Noelle Monferdini recused herself because one of her family members works for Chick-fil-A. A second read at City Council is scheduled for Feb. 15.