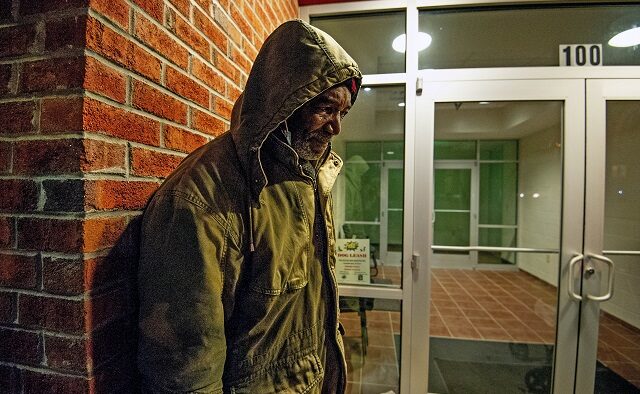 Barry Martin waits outside for the warming center at DeKalb County Fire Station No. 3 in Avondale Estates to open on Thursday Jan. 6, 2022. Photo by Dean Hesse.
Share

Avondale Estates, GA — On freezing nights, DeKalb County opens warming centers for homeless residents to get out of the cold.

On Jan. 6, men waited outside Fire Station No. 3 in Avondale Estates for the doors to open. The fire station serves as one of the county’s three warming centers. A firefighter let them into a meeting room with tables and chairs. There were no cots. The four men had access to a restroom and a TV.  The fire station did not provide them a meal.

The firefighter took their temperatures, made sure the men had masks and signed them in.

Fire Station No. 3 is just a place to stay warm, and those hoping to find housing or a meal won’t find that in a fire station conference room. With snow and ice in the forecast for this weekend, local advocates are calling on the county to do more. 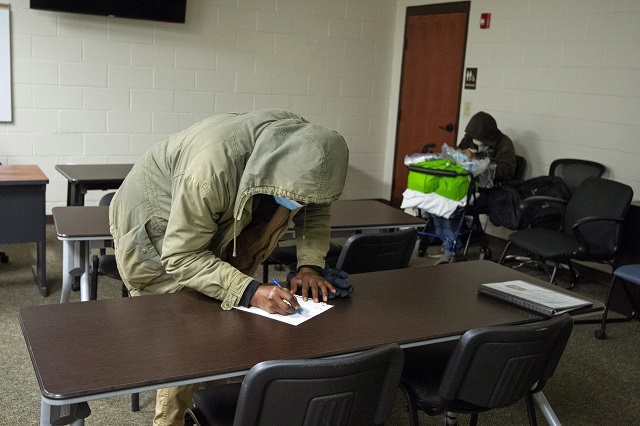 Barry Martin signs in while Greg Brittain, in rear on right, settles in for the night inside the meeting room used for a warming center at DeKalb County Fire Station No. 3 in Avondale Estates to open on Thursday Jan. 6, 2022. Photo by Dean Hesse.

“More than a month after we started calling out the county for its inaction on warming centers, they still tell us that fire house conference rooms without food, water or a place to sleep are the best that they can do,” said Sara Patenaude, chair of the Coalition for a Diverse DeKalb.  “No one’s willing to be accountable for taking action that is literally the difference between life and death.”

On Jan. 6, Barry Martin, and three others, made their way to the Avondale Estates fire station seeking shelter from the cold. Bundled up in coats, the four men had their belongings with them and hoped to find housing, warmth and a meal.

They arrived at the fire station at about 6:45 p.m. but the warming center didn’t open until 8 p.m.

As the men waited, they knocked on the doors, hoping to find someone to open the door. The fire station doors were locked, the lights were off, no one appeared to be inside, and the fire truck was gone. They wondered why no one was there from the fire station staff or the county.

“They need to leave somebody at the fire station when they leave,” Martin said.

Unable to stand any longer, Greg Brittain sat on the ground as he waited to spend the night at the warming center. He hoped to find “warmth” inside.

“I’m glad it’s here. I’d be more glad when we get inside,” Brittain said. 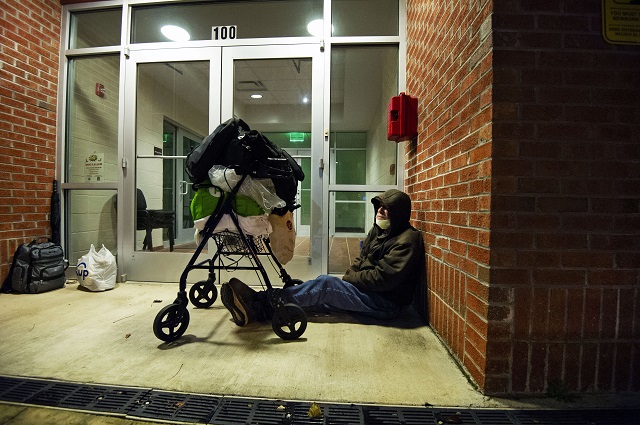 Arriving before the 8 p.m. opening time and unable to stand any longer, Greg Brittain sits on the ground while he waits to spend the night in the warming center at DeKalb County Fire Station No. 3 in Avondale Estates on Thursday, Jan. 6, 2022. Photo by Dean Hesse.

The men were allowed to stay at Fire Station No. 3 until 8 a.m.

Beacon Hill Black Alliance for Human Rights member Phil Cuffey visited the Avondale warming center in December. He noted the conference room had a capacity of about 10 people, socially distanced. Individuals with a temperature over 104 degrees are turned away.

“The coordinator (an EMT) monitors the activity and keeps a log. No drinks, food or services are offered,” Cuffey said. “A few years ago, volunteers offered sandwiches and drinks. Water is given if requested.”

At the time he visited the warming center, individuals could stay for one hour with some leeway given. Although, now people can stay overnight.

“At the 30316 station…one person came in off the street,” High said. “The station isn’t keeping supplies like water, no hot food, coats or blankets. The person who came in asked for water and they just happened to have a bottle in the back of the station which they provided her. Station is open 8 p.m. to 8 a.m. Basic provision of a warm building where they can stay overnight or just stop in for an hour or two.”

DeKalb County Emergency Management opens warming centers when temperatures drop below 35 degrees and are considered dangerous due to the wind chill, precipitation and a predicted duration of two hours or more, a spokesperson for the county said.

However, the county opens three warming centers at fire stations, mostly in central and southern DeKalb County, that are meant to service the entire county. The county typically uses the fire stations in Avondale Estates and Ellenwood, as well as the one on Flat Shoals Road in Atlanta. 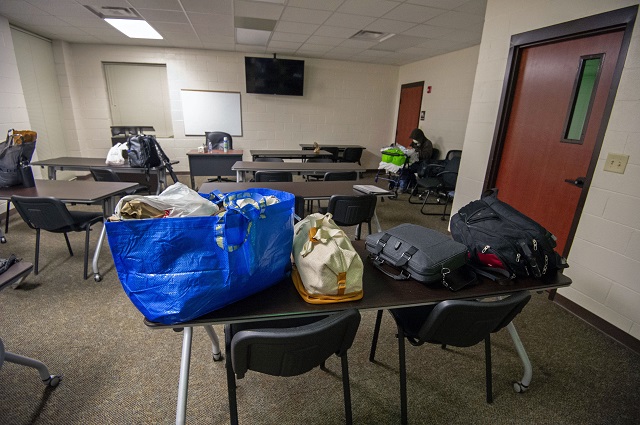 Several men’s bags sit on a table as Greg Brittain, in rear on right, settles in for the night inside the meeting room used for a warming center at DeKalb County Fire Station No. 3 in Avondale Estates to open on Thursday Jan. 6, 2022. Photo by Dean Hesse.

There are about 1,200 homeless people in DeKalb County according to the 2020 homeless point-in-time count, which is the most recent count. During the 10 days the warming centers have been open, an average of 4.3 residents have utilized them, according to the county.

Notification about the warming centers is sent out through news releases and social media, community homelessness advocates and police officers who come into contact with those in need of shelter. The information is typically released the day the centers will be open.

“Warming centers are one important part of the County’s ‘Comprehensive Strategy to End Homelessness’ that includes permanent housing, transitional housing (motels/hotels) and emergency shelters,” the county spokesperson said. “Citizens who spend the night at warming centers are interviewed the next day by the County’s homelessness staff and placed in transitional housing, as appropriate.”

Currently, the county is housing over 150 homeless citizens in transitional housing. Those accommodations include meals twice a day, case management and security.

“The County’s homelessness efforts are a top priority and include multiple county departments including Public Safety and Community Development,” the spokesperson said. “We acknowledge that DeKalb has a homeless issue and are confident that our ‘Comprehensive Strategy to End Homelessness’ will continue to make strides in eradicating homelessness in DeKalb County.”

Local advocates have been demanding that DeKalb County open more than three warming centers to serve the county as well as provide basic needs like a meal, showers and a cot.

“All of this is and has been a crisis in our country, our county and our community. It is not a problem that suddenly appears when temperatures drop, nor is it a problem that goes away when unhoused people are ignored or bused off to the city of Atlanta. Even so, it’s a problem that gets more acute on these freezing nights when those who are unsheltered face the very real risk of freezing to death,” said Sara Patenaude, chair of the Coalition for a Diverse DeKalb, at a press conference on Friday, Jan. 7.

A firefighter at the fire station in Avondale Estates told a Decaturish reporter that the facility is meant to be a warming center and not a shelter, which is why they don’t provide a meal or a cot to sleep on.

“While we initially welcomed this news [of warming centers], we were appalled by the complete lack of services and support provided at these warming centers,” Patenaude said.

As the affordable housing crisis continues in DeKalb County and metro Atlanta, more and more people are experiencing housing instability, she added.

“The unhoused people we see on the streets are only the most visible manifestation of this crisis of homelessness,” Patenaude said. “Winter comes every year. Freezing nights come every year. DeKalb County has access to the same weather reports we do and has the ability and responsibility to act.” 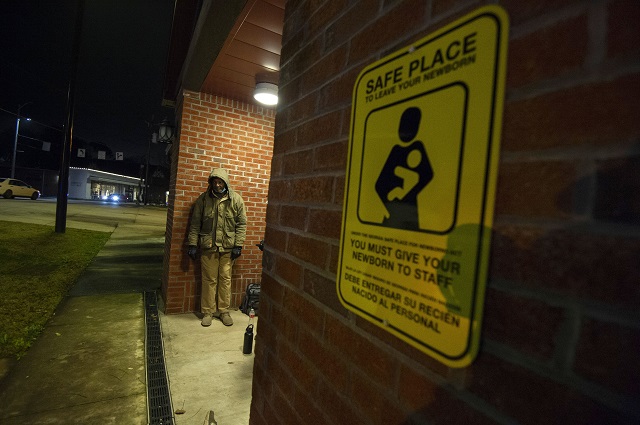 Barry Martin waits outside for the warming center at DeKalb County Fire Station No. 3 in Avondale Estates to open on Thursday, Jan. 6, 2022. Photo by Dean Hesse.

The groups gathered on Jan. 7, to reiterate their demands for more warming centers to be open throughout the county that provide a warm meal, a shower, a cot to sleep on and connect to support services.

During the press conference, the temperature outside was about 28 degrees, which meant those in attendance were bundled up with thermal underwear, coats, hats, scarves and gloves.

“However, there are people in DeKalb County who are not able to do that,” said Paul Turner, pastor of Gentle Spirit Christian Church, as he warned of the dangers of hypothermia. “Hypothermia is caused by the exposure to cold weather or immersion in cold water. By the way, I would remind our commissioners, it’s been raining while it’s been cold too.”

Turner encouraged the county to find places that are better than fire stations that would provide a meal, something to drink and a place to sleep.

“Fire stations now allow people to stay overnight. The Avondale Station, because it’s small, can only put people in chairs. They can’t even lay down. Fire stations are not built to take in a whole bunch of people,” Turner said. “We cannot kick the can down the street. People cannot be sent to Atlanta.”

The groups also advocated for the county to send out notice that the shelters are open 48 hours in advance to give time to notify unhoused individuals. The groups additionally urged the county to provide transportation to the warming centers.

“While holding city and county leaders accountable, our objective is to see meaningful and measurable progress towards ensuring everyone’s human right to housing,” said Diana Berman, a member of Beacon Hill Black Alliance for Human Rights. “The recent opening of warming centers in DeKalb County does not fully meet the needs of the unhoused during what has been a frigid winter.”

Berman asked that the county coordinate this effort across the centers, as well, so there is continuity of services.

“It is imperative that DeKalb County is held accountable to meet these basic human rights with dignity and care,” Berman said.

The groups urged the county to use funding it has received from the Department of Housing and Urban Development, the CARES Act and the American Rescue Plan to address the issue. Patenaude said the county needs to have a plan and a way to deploy those funds.

As of Jan. 13, a winter storm watch has been issued for Northeast Georgia, according to 11Alive. A disruptive winter storm is expected to bring a wintry mix of snow, ice and rain to parts of the state over the weekend. In the areas under the watch, 2 to 5 inches of snow and up to a quarter of an inch of ice will be possible. Residents should expect difficult and dangerous travel and plan for the possibility for power outages.

DeKalb County is not part of the watch, but the forecast currently says there’s still a possibility for snow in metro Atlanta.

The county’s warming centers will be open. 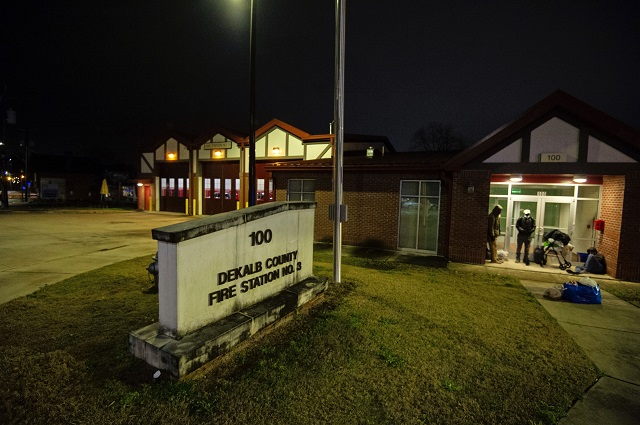 Men who arrived before the 8 p.m. opening time wait outside to enter the warming center at DeKalb County Fire Station No. 3 in Avondale Estates on Thursday, Jan. 6, 2022. Photo by Dean Hesse.